Galactic Empire of Cyrannus
New Cyrannian Republic
Alberensis is a planet located in the Westward region of the Cyrannian Core Worlds, located along a critical hyperlane providing the world with strategic and industrial importance rivaled by few other planets in Cyrannus. The planet is situated along a key intersection of the Cyrannus hyperlane network, linking the Deinon and Gailien Sectors with the galactic capital Orbispira. Though one of the most cosmopolitan worlds in the galaxy, Alberensis is primarily inhabited by the Albersauros, a proud and fiercely independent people who had a hand in forging the First Republic many thousands of years prior to the Great Cyrannus War.

A key centre of the First Republic, the Federation of United Worlds and the United Republic of Cyrannus, Alberensis has long held a reputation as one of a key proponent of the individual rights of worlds within a galactic framework—valuing independence as one of the key fabrics of Alberensian culture and society. When the Galactic Empire of Cyrannus rose to power, the people of Alberensis were deeply sceptical, which in turn gave rise to a popular resistance movement. The Republic is largely suspected at having a hand in arming these rebels against Imperial rule, though no hard evidence as yet come to light. What is known however, is that Alberensis is a thorn in the side of the Empire, committing crimes which would have warranted a planetary liquidation, where it not a world so important in the Core.

During the Cyrannian Cold War, Alberensis became a battleground between the Imperial forces on the planet led by Captain Marquar Cuinn and cells of the Cyrandia Resistance, supported by the Republic. These Resistance cells successfully became entrenched in many of the planet's core settlements, prolonging the conflict and robbing the Imperials of a swift and decisive victory.

The early history of the planet is shrouded in mystery, though it is known that the Albersauros played a crucial role in the establishment of the First Republic upon the collapse of the Sovereignty of the Core during the First Phaedric Invasion. The allosaurid natives of the planet, the Albersauros, successfully repelled invasion after invasion of the world by a myriad of empires throughout history, beginning a long history of Alberensian hostility to alien control over their way of life. Nevertheless, the planet became a key member state in the Federation of United Worlds, gaining significant political and economic clout over much of the Core Worlds. When the Federation became the United Republic of Cyrannus, Alberensis was one of the most vocal critics of the galactic government in the Republic Senate, believing that each individual world should retain as much autonomy as possible without interference from Orbispira. Nevertheless, the planet would remain loyal to the democratic ideals of the Republic, even after the rise of the Galactic Empire of Cyrannus.

Thorn in the Empire's Side[]

Though Alberensis remained one of the most important factory worlds of the Empire upon the end of the Great Cyrannus War, the planet quickly gained a reputation as one of the most vocal critics of the Imperial government, often overtly supportive of the Republic Remnant and later, the New Cyrannian Republic. Indeed, during the fraught astropolitical climate of the Cyrannian Cold War, the rebellious people of the world elected a government-in-exile to represent Alberensian interests in the Galactic Senate of the Republic.

In 13 NE, with the Cold War heating up across the galaxy, the Resistance cells on the planet suddenly launched a massive coordinated strike against the Imperial occupation force, aiming to rid the planet of the Empire once and for all. With support from the Republic, the Resistance led a violent campaign throughout the planet, including the streets of Tithonia itself, utilising guerrilla tactics to avoid Imperial detection and strike when they became most vulnerable. Coupled with the conflict with the Dilanian Interstellar Empire the same year, the conflict did much to damage Imperial prestige across the galaxy, particularly when it became long and arduous, with no end in sight.

Alberensis is home to an allosaurid saurian race known as the Albersauros. A proud and fiercely independent people, the Albersauros are renowned for their love of commerce, exploration and warfare, and are common sights on ships traversing the space lanes throughout the Cyrandia Cluster. Of the species currently influencing the astropolitical map of the Cyrannus Galaxy, it is clear that the Albersauros are one of the oldest, developing space flight capabilities long before the establishment of the First Republic. Throughout history, the Albersauros have been at the forefront in scientific and commercial advances in Cyrannus and as a species, they are perhaps second only to the Libertus, in shaping the galactic interior to become the most prosperous region of the galaxy.

The Albersauros deeply value their world's independence and are thus openly hostile to the totalitarian regime that is the Galactic Empire of Cyrannus. While a government-in-exile, primarily made up of Albersauros, have pledged allegiance to the New Republic, they question the future direction of it. Indeed, Senator Berrias, who represents this government in the Republic Senate, is aligned to the Reformist party—which seeks the restructing of the Republic to emulate the Federation of United Worlds. Nevertheless, most Albersauros hope that the Republic will soon liberate their world from the Empire, with many serving underground cells of the Cyrandia Resistance in opposition to the Imperial occupation of their world. 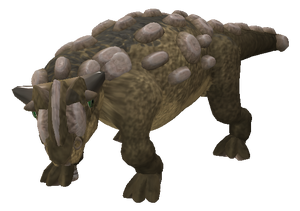 Hauterivosaurus
Ankylosaur
Often described as a living tank, the hauterivosaurus is one of Alberensis' most famous herbivores, emblematic of Alberensian resilience in the face of adversary. Indeed, the mighty club attached to the tail of the hauterivosaurus is capable of pulverising the leg bones of any predator foolish enough to approach the scaly hide of the creature, which makes up for a lack of speed and intelligence with formidable defences. In the ancient days of the tribal Albersauros, hauterivosaurs were often used as mounts during battles, though such practices have long since faded into history.

Tithonia is the vast, continent-spanning capital city of Alberensis, home to over one billion inhabitants from across the Cyrannus Galaxy. One of the most prosperous cities in Cyrannus, the word "Tithonia" is synonymous in the galaxy with prosperity, freedom and progress, home to celebrated institutes of higher learning, vast industrial zones tasked with the creation of Imperial Star Destroyers and vast skyscrapers which reach up into the very heavens which for millennia have beckoned the people of Alberensis to reach out and explore. The most important strategic location in the city are the Drallibran Shipyards, which are capable of servicing thousands of vessels a day, in addition to the construction of vast Imperial warships, despite the ever-present danger of sabotage from Republic-aligned workers.

“One of the most important worlds in the Core, with any luck, we will aid the liberation of Alberensis from the thrall of the Empire and toward the light of freedom.” 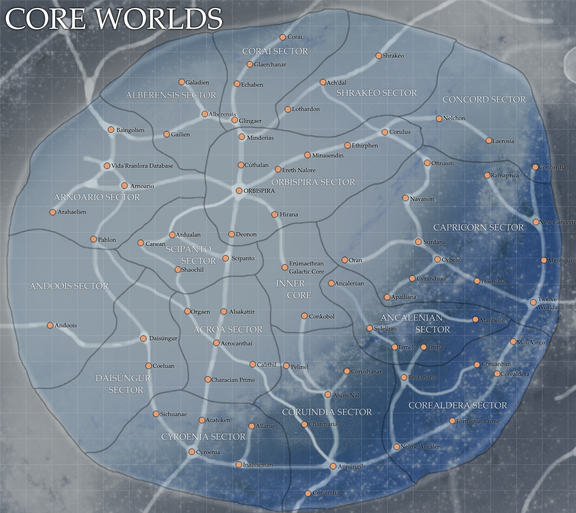 Alberensis is located in the north west of the map.