Afiloxenos is an extreme planet in the Demolidus Sector of the Arm of Wildness in the Borealis Galaxy, and the homeworld of the Zí-Jittorám. After the fall of the Borealis Consortium Network, Afiloxenos became independent.

Afiloxenos is a very cold planet, averaging 8 Celsius all year and having the lowest temperature around -87 C (-125 F), the hottest being close to 17 C (63 F). The vast majority of the planet is earth, with all the water on Afiloxenos being great lakes. The waters of Afiloxenos seems similar to the same colour of the ground (being a sickly pale green), but close up it is a jet black. Due to the harsh conditions, the earth has become cracked, some valleys reaching nearly 1000 miles (1610 km) wide. Apart from this, Afiloxenos is very flat save for mountain ranges. The tallest mountain on Afiloxenos reaches a height of 78,880 ft (24,042 m) but is very flat and curves with the planet. Afiloxenos' atmosphere is very thin. 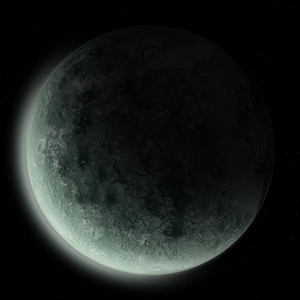