Rambo Nation
Aegimi is a colony of Rambo Nation, once home to a small trading post it was raided by the Trivoid in the aftermath of the Second Galactic War in 2798 (0 BQF), left in ruins the colony once again saw people settling down month after the Imperial Alliance was defeated. The Rambo Ancientia that were not taken by the "Great Dissapearance", the refugees decided to adopt Aegimi as their new homeworld, rebuilding the once proud keep and bringing wealth and prosper to the harsh and dangerous tundra world.

By 2820, the planet suffered a visit of Mandator Camron Dar and his Contingency plan, removing the Whitharia population.

Aegimi is a planet located in the outer colonial sector of Rambo Nation, north of its colonial capital Javan. Explorers of the navy, in service of Rambo Command discovered the planet as early of 2698 (100 BQF), amazed by its frozen tundras and frozen cliffs settlers decided to colonize the planet around 2718 (80 BQF), though the harsh climate and agressive wildlife soon made clear that their village had to be walled, resulting in the construction of Frost Keep at a steep hill, surrounded by water.

For years, the planet was considered of low importance and often remained out of conflict due to its remote location, though during the final stages of the Second Galactic War in 2798 (0 BQF), the colony was conquered by a surprise attack of the Trivoid. Most of the colony was leveled and left in ruins. Abandoned for almost two years, after the Intergalactic War in 0 AQF, the refugees of the Rambo Ancientia population that remained after the "Great disappearance" settled down at the frozen planet, they rebuild Frost Keep and actually brought wealth and prosper to the harsh planet by fishing. Ever since, Aegimi became a stronghold of the Ancientia, while other races settled down as well at the planet, it is seen by many as the new Ancientia adopted home world, protected by a fleet of Foray-class cruisers as well.

In March 2820 (21AQF) the planet was visited by Mandator Camron Dar who issued his Contingency Plan and exterminated the Witharia population, leaving their remains on the bridge so that the native predators, the Carnotarians could feast upon them.

Frost Keep is the main settlement found at Aegimi, located at a hill, surrounded by water the keep can only be entered by a long bridge crossing the water, easily guarded by the Seven Starr Serindia soldiers stationed there. Its town hall gives a view over the water and the frozen cliffs in the distance, while within its massive walls many houses were constructed, giving the citizens the protection of the walls. Those who refused to live within the walls, have their houses located outside the walls, down hill towards the harbour. The harbour itself features a wooden wharf, where the fisherboats are docked when not sailing for fish.

Within the walls of the keep a statue has been erected in honor of the fallen citizens during the Trivoid occupation, it features a pierced Trivoid, by a spear with the Rambo insigna.

Houses found near and in the keep

Beside the Frost Keep, Aegimi features little Rambo sides. Nearby the Frost Keep, a large skull has been found, emerging from the frozen deeps, the skull sends chills among all that visit it, a breath taking side as the skull is around the size of an Excelsior-Class. When the winds howl, you can hear sounds emerging from the openings in the skull, often referred by the citizens as the Dragon's Sung. It is a populair tourist attraction for those who like to visit winter and cold locations.

Another populair and mysterious location is the Four Peak Temple, almost covered by snow, the upper temple structures are still visible. Though forbidden to enter, it can only be reached by a skeleton bridge, dangerous due to the strong winds. Many believe it to be a remnant of the Crab like species of old. 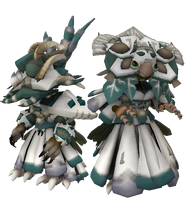 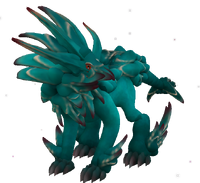 The large herbivore Aghetûk are nerbous and dangerous creatures. Wandering the frozen tundras in search of food, they are the natural prey of other races at Aegimi. They developed a keen sense when or not to cross frozen waters, something the citizens learned of. Where there are Aghatûk, the ice is safe to walk upon.

When defending themselves, these stampede or use their roars to frighten foes. They often move in herds. 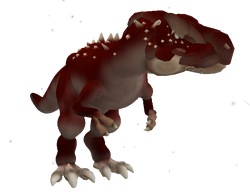 The large and dangerous Carnotarian are red colored sauriens, these carnivors hunt down the Aghatûk but are also known to devour and attack the citizens of Aegimi. Feared by wildlife and citizens, these ancient and stunning creatures are rather rare and not often seen near Frost Keep, but they often follow the herds. When a herd is nearby, they often say at Aegimi to watch your back, though large they are incredible fast and agile, even in snow or at ice.

Their roar is feared by all, as well as their teeth.

The Karpraids are the only Scions found at Aegimi, these fish live in the cold waters of Aegimi, with their only natural enemy the cold or freezing ice, the Karpraid met their first enemy when they became the prey of the citizens, who find the fish a delicacy, known to the citizens as the Karpraid Fish Dish.

When in defense, they can use their horn and weak water attacks to defend themselves. They are rather fast and quick and often escape the nets of the boats. 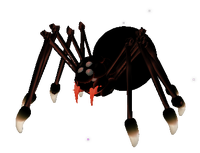 The Spideracnia are a large and dangerous spider species, their black coloration signals their deadly venom and aggressive nature. Often living in abandoned shelters or cave, these spiders wait patiently for their prey to come by and fall in their webs. Scientists discovered a Spideracnia can survive a year without food before dying. They are most active at night.

most of the png files require the dark Injection mod