Cognatus Empire
The mysterious planet known in lengends and mysteries as Aecor, is in fact a former star; the Atlantica constructed a massive ringworld around it, providing the Atlantica with a massive city that is easily defended against any threat!

Build in a time long forgotten to the ages, Aecor was once a massive lone star. A shining beacon in the center of the Unclaimed Territories- often seen by others as a brighter light than other stars.

When the Aininyë were created by the Ultimate One in 200.000 BQF- the Atlantica soon began feeding the Quadrants with life to thrive and develop to bring Dino's dreams of an Utopia into reality. The Aininyë, who later became known as the Atlantica- gods for various civilizations within the Cluster began constructing their own structures as well, wich could withstand the theeths of time.

Among the structures build by the Atlantica were the bastion fortress of Lesrekta in Quadrant 82, the Shrine of Selenyia in Cyrannus, Alethena Metru in Quadrant 21 and the massive super structure known as Aecor in Quadrant 82 as well. The construction of Aecor proved to be a great challenge for the Atlantica, as they had to quell a star's power- wich they eventually succeeded in. As such they began harvesting the star's heat for to provide the power and energy needed to maintain the artificial created ring-world. As massive stone ring was constructed around the former star, where soon after villages and cities were constructed to provide homes and shelter for the Atlantica and their future subjects. The Atlantica began building defenses in the form of massive portals with powerful phasers, massive shield generators and shields to keep the atmosphere and climat in check. Within the massive structure the Atlantica build a chamber to house their artifact known as the Zevian Skull- the skull was to provide the structure to maintain and enforce the protective barriers around the Quadrants at all time. With Aecor her primary function finished, the Atlantica began preparing the structure to house their civilization as well.

Sadly, as the massive super structure reached her completion, and only the western cities and villages constructed, as well the woods planted- construction came to a sudden end. Around 22.500 BQF the Atlantica wages war with an unnamed crab-like species who challenged the rule and might of the Atlantica. Forced to abandon their structures in Quadrant 82, Aecor was abandoned as well. In all haste, the Atlantica left one ship behind, who's engines were down for repairs.

As the Atlantica and crab-like species waged their war, the Atlantica never returned from their battles and Aecor continued her primary role, but was lost in history as none dared to venture to the center of the Unclaimed Territories due to various anomalies surrounding the planet, the first defense line left by the Atlantica.

As such the western cities and villages remained ever empty, giving the structure a spooky appearance when a lone stranger stumbled upon it in sheer luck- though none ever managed to escape the planet again.

In 06 AQF/03 NE the planet was rediscovered at accident, or by sheer luck by Claire Rambo and the crew of the Suiliagothrond II during the Hunt for the Zevian Skull. At point of arrival the crew began exploring the structure, but soon became the ground for a battle between the USS Enterprise-A under command of captain James Rambo and the Shadow of Liberty II, under command of Thel'Vicliquam. During the short showdown the USS Enterprise-A was heavily damaged, while the Shadow of Liberty II was destroyed after destroying a sky scraper by the defenses of the ring. After a face down within the tombe of the Zevian Skull, where Claire Rambo was seriously injured by Thel'Vicliquam, the skull was almost disturbed from it's resting place- but the timely arrival of a fellow Cognsangui prevented a disturbtion.

He informed that the Cognatus Empire and Rambo Nation were to protect and study Aecor together. Afterwards a joined fleet now lies in orbit of Aecor, protecting it against harm.

A few weeks later, Empress Ramashe presided a prisoner transfer of the the Cogsangui that was captured by Rambo Nation during the Intergalactic War. In a gesture of good will, and to promote the new cooperation and study of Aecor by the Cognatus and the Rambo, she offered to release the prisoner. During the fifth month of 07 AQF, the planet was honored by the arrival of the massive super star destroyer Imperium, visiting the planet was Emperor Tyrómairon as part of his state visit to Rambo Nation while he was on his way back to the Cyrannus Galaxy.

Several years later, the young Ortella known as Aoirtae Valaeris received a vision while training on Aldár, informing her about the Zevian Skull locked deep within Aecor. Informing her masters of her vision, it was decided that an expedition was necessary to retrieve the Skull and bring it back to Aldár. Kara Inviá agreed to ask her father, Senator Apollo of Capricaerón to secure their passage to Aecor by appealing to Rambarth Dino II Le Rambo, the Lord Regent of Rambo Nation, who ultimately granted the permission of the Rambo government, provided that he himself joined them to ensure that tensions with the local remnant of the Cognatus Empire did not erupt into conflict. Meeting with Doctor Dané Elenya and Shiplord Rtas'Shagili, the group travelled to the Zevian Skull, only to be transported back to Aldár—much to the shock of the authorities at Aecor.

As said, the structure once housed Atlantica who were constructing the massive structure- though upon the start of their war the Atlantica abandoned the structure never to return. Ever since 22.500 BQF the structure remained empty of any species or creature.

During Aecor her excistence, only the western city and woods were finished during her construction time.

The central continent is the most important part of the ring surrounding the former star. From this part the rest of the ring recieves her power and energy to maintain the defensive grid- wich are marked by the blue nods and various portal phasers, as well as to maintain the atmosphere and climate within the ring cities and villages.

The central continent her borders are marked by the four section containing for large portals. These massive structures house even more shelters, militairy training rooms and various shuttle docks among others. The four massive portals can be activated to travel in mere seconds from one place to another planet containing such portals (in example: the Rambo Capital, Capricaerón, Shrine of Selenyia, Zevia, Alathena Metru). The massive tower like structure wich connects the ring with the surface houses the various pipes, advanced equipment etc. to provide the ring with power and energy.

The western "continent" houses various villages, build in the same style found at Zevia and Alethena Metru. These villages and cities were constructed with various houses, skyscrapers and bathhouses. The furhter away from the center of the ring world, the less skyscraper and observation towers were found.

Coming closer to the Central Continent, the skyscrapers became bigger and bigger, as well as the woods less present. Some villages also contain docking ports for ships to dock- as well as various luxary accomodations and statues.

The gallery contains the template png. of the planet, right click to save and drag it into your sporepedia to visit the planet yourself. 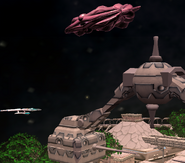 “One of our greatest accomplishments, we build it in defense against threats wich could endager our excistance!”

“Aecor could provide me with the means to bring the Atlantica to their knees once and for all!”

“The gods are wise in all things! They constructed this majestic place to propel us, the chosen few, to enlightenment!”

“It shall not protect you from death and decay. Mortal constructions serve a mortal purpose.”