Planets are objects that orbit stars. In the Space Stage planets can be colonized to harvest Spice. Planets feature a wide variety of terrain, such as mountains, oceans, lakes and plains. Planets can be populated by flora and creatures in varying quantities based on terrascore. Habitable planets may be found in varying stages of development, including worlds with creatures, tribes and civilizations.

Each planet has a randomly generated surface that adapts to the current T-score by changing the sea level and color of the ground, and even switching the water for ice or lava depending on the temperature. Sometimes, planets generate with a unique terrain formation, such as scales and mountains. There are some exceptions to this, most notably the Sol system.

Every planet has a fixed orbit, and the shorter the distance between the planet and the star, the smaller the orbit will be (and hence the less time required for the planet to go around the star once). There are six types of orbits in the game, ordered in distance from the star. Starting from the closest, they are orange, green, lime, turquoise, blue and white. The color of the trail indicates which type of orbit the planet is in.

Gas giants normally have blue orbits. Sometimes they have green orbits, and are rarely found in orange orbits, depending largely on the planet's distance from its star. Gas giants can rarely be found in turquoise orbits.

Moons always have the same type of orbit as the planet around which they orbit, but their orbits are shorter and more transparent than those of planets.

Orange orbits are the second most common orbits in the galaxy. Planets with the orange orbit are closest to the star and have the shortest year. These planets are always hot and tend to be boiling or lava planets. Mostly, they have too much atmosphere. Their atmosphere color is usually orange, red or pink; the ground is usually red or pink; and the seas tend to be red.

Green orbits are third most common orbits in galaxy. Planets in green orbits are more easily terraformed (and hence are easier to colonize). In addition, these planets may already have plants, creatures, tribes, civilizations or empires.

Turquoise orbits are very rare. These orbits are somewhere between the green and blue orbits, and planets with these orbits exhibit some of the characteristics of planets in both blue and green orbits. The color of their atmosphere, water and land varies greatly.

Blue orbits are the most common orbits in galaxy. Because planets in blue orbits are far away from the star, they are always cold and are normally covered in ice. They have ice geysers and asteroids falling onto the ground. These planets tend to have gray-colored land and have very little atmosphere.

White orbits are the rarest in the Spore galaxy, and only exist in some Binary OO systems (double blue stars). They have almost the same characteristics as blue planets, but they are extremely hard to terraform: the second you stop terraforming, the T-score will immediately drop to where it was before (usually the lower left). Even when using the Staff of Life, the planet will try and force itself down to T0, meaning that they have very fragile ecosystems. These are also the only type of planet which its orbital color will change to pale grayish blue when it is closest to its star and back to white when it moves farther out into its orbit, as these planets, as well as many others, will have irregular orbits. 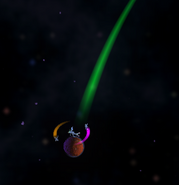