Maldri the Quantum Raider is a Quantum Ravager from Darkspore. He is an especially powerful hero with a remarkably high level of stats, who is very difficult to acquire in the normal version of the game. He is from Zelem's Nexus. He used to be a thief, and while raiding Zelem's abandoned hideout, he accidentally activated a ray gun that shot him, and granted him his Quantum powers. He shares his Genesis type and class with Vex.

A recent post on the Darkspore forums has confirmed that Paul Sottosanti is trying to make the Gamma variant of Maldri the hero that will be unlocked via preorder. Many playes voted Maldri Gamma due to his high dexterity, unique variant ability, as well as ironic position at Crogenitor Level 42.

When civilization flourished inside Zelem’s Nexus, Maldri was what other species would have called a burglar. Anything denied him by encryption, by a lock, by the law, was what he desired the most.

When the Darkspore invaded, most of Maldri's fellow Nexus-dwellers saw nothing but catastrophe. Maldri saw opportunity... for looting. And when he eventually stumbled upon one of the lost laboratories of an alien almost no one believed existed, Maldri knew he’d found the greatest treasure trove of his life.

Inside Crogenitor Zelem’s abandoned enclave, Maldri tried taking everything that wasn’t welded in place. And then he accidentally activated a device that shifted him dimensionally, granting him, as he soon learned, a range of quantum powers.

Emerging from Zelem’s lair, Maldri found himself surrounded by Darkspore. He quantum-jumped instantaneously to wherever his enemies were standing, attacking them physically before teleporting away. With his improbability assault, Maldri counter-inflicted any damage done to him. Some of his foes he slowed or stopped in time. Still others, he blasted back or blew up.

To the Darkspore, Maldri is an unpredictable, almost untouchable spectre... a quantum raider.

Quantum Superposition Maldri exploits his probabilistic existence at many positions in spacetime to unleash 6 successive attacks on random nearby enemies, each on dealing 6-32 physical damage.

Dimensional Rift Banishes all enemies in a 6m area into an alternate dimension for 8 seconds. Those enemies can´t act but are immune to damage and further status effects.

Probability Assult For the next 8 seconds anything that damages or is damaged by Maldri suffers negative random effects.

Unpredictability (Passive) Thanks to unpredictable motion, Maldri's Dodge Rating is increased by 100%. [1]

Maldri and the Limited edtion parts were recently seen in a UK trailer for the Darkspore pre-order offer. 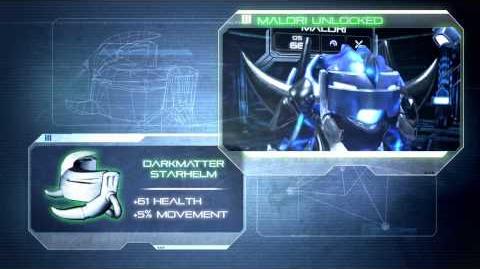