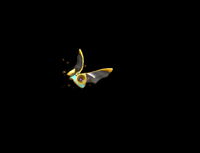 Hop Gogs is a socializing tool in the Captain Outfitter.

The Hop Gogs looks similar to a drama mask, in shining gold.

The Hop Gogs enables the Stunning Dance Captain ability. It can be upgraded, unlike Princely Pad's Graceful Waltz, but uses up more energy.

Hop Gogs uses up energy, unlike the Princely Pad's Graceful Waltz, and thus can be upgraded. If it is going to be used to impress creatures that are otherwise extremely tough to impress, then Hop Gogs is worth it. Otherwise, Princely Pad is better as it uses less energy, thus making it good for captains who have a shortage of energy.