Hands (also known as Graspers) are a type of creature part that can only be placed on the end of limbs. Placing a hand on the end of a limb will turn it into an arm and the creature will gain the Graspers ability, allowing it to pick up objects such as sticks, rocks, and fruit, and either give them to as gifts to other creatures, or throw them.

Hands are the only parts that can grant the Pose ability.

Bot hands are only available with the Spore Bot Parts Pack.

It is the default grasper on any arm put on the creature. It only gives the

Unlike any grasper in the gameplay of Spore, this part is unobtainable (without using any hacks or modification), and it is exclusive to the Grox. It costs

150, has a complexity of 16, and has the following abilities:

Following is a list of the abilities and complexities of all available hands. 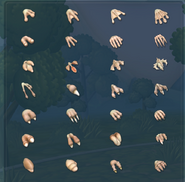