As a child, Zhevar taught himself how to communicate with scions through his interactions with the intelligent Rattatoi Apachu, whom he met in the crags of Gaskhan. The two very quickly became inseparable. When Zhevar was old enough, he left Gaskhan on a Rambo ship to explore and took the aging scion with him. The pair journeyed to numerous planets in search of other scions and finally found their way to Terra Prime. There, he met the Yodian summoner Kjac and learned from him more about the mysterious creatures and how to handle them.

Tragically, Apachu was killed while tracking a herd of Buluaros through a forest with Zhevar. The pair was ambushed by the very herd they were hunting and the scion sacrificed himself to give Zhevar enough time to escape. Depressed, Zhevar trudged through his final months under the tutelage of Kjac, though he refused to take another scion for his own after Apachu. Once the Yodian was finished with him, Zhevar chose to leave and wandered aimlessly until he returned to his homeworld. Once there, he made his way to the crags of his childhood and sat in the spot where he had first met Apachu. He waited there for three days and nights until the Rattatoi, accustomed to his presence, began to approach him. Zhevar met and befriended each of them, one by one, and came to know them by their names. He finally caught and domesticated a Rattatoi female called Shekon. However, he slowly came to realize that she did not have Apachu's intelligence, wisdom, or character, none of them had. Apachu had been unique among scions, and he was gone.

Overcome with grief, Zhevar sold Shekon on the Gaskhan marketplace, earning a fair bit of currency for her. The purchase garnered him the attention of several other people who wanted to buy scions, and he soon realized that he could make a living this way. To make catching Rattatoi and other Vulkcrow easier, he domesticated a male Vulcrow which he called Chagslar, meaning Enormous Bird in the Kaskhanian language, and opened a shop in one of Gaskhan's cities. In 2799, he was approached by French and Hal'Sk entrepreneurs looking to make a profit by bringing the sale of scions to Station Q8. Zhevar accepted, and since then, he and his apprentices have made frequent appearances on the station's many floors, acting as trainers, teachers, and sellers.

During the 12th month of 06 AQF, Zhevar encountered captain James Rambo of the USS Enterprise-A who were sightseeing at Gaskhan. Offering them to buy Scions, the Rambo captain politely refused and resumed his sightseeing.

Zhevar was never the most sociable or gregarious Gaskhan, instead preferring long periods of solitude. His only consistent company since he was a child was wildlife, which came in many forms, and he still has a very deep appreciation of it. He is patient, gentle, and curious by nature, though his lack of consideration for Gaskhan tradition and values have earned him the scorn of many of his elders. The death of Apachu left him lost, grief-stricken, and angry, though he is recently beginning to find his place in the universe again.

As with all summoners, Zhevar's bond with his scions has affected his personality. From Apachu, he learned a great deal about compassion, curiosity, and wonder. From Chagslar, he is beginning to inherit the bird of prey's strength, courage, and control. These new traits, combined with his improving status as a mentor and summoner, are helping heal the wound caused by Apachu's death. However, it cannot be doubted that he will always bear a scar of that event.

Zhevar has an innate talent with scions which makes him a skillful summoner, trainer, and tamer, though his true potential can only be unlocked with time, focus, and study. 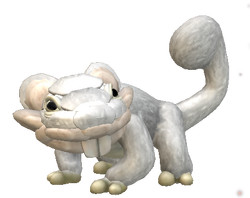 Apachu †
Unique among Rattatoi, Apachu was an intelligent and sociable creature with snow white fur and a soothing presence. Whether or not he had been tamed and then released by another summoner is unknown, though it is unlikely that he would have developed to such a degree in size, experience, strength, and wisdom without the help of a trainer. If he did, that would make him even more of a rarity among scions. He was Zhevar's companion since he was a child, perishing in the forests of Terra Prime in an attempt to save him.

Chagslar
The fact that Chagslar, literally "Enormous Bird" in Kaskhanian, was never given a proper name gives insight into his relationship with his master. As a scion, Chagslar is cold, sometimes cruel, taking pleasure in the hunt and killing of prey on Gaskhan, though he respects Zhevar's directive that the Rattatoi are off limits. Theirs is a purely practical relationship that has strengthened their two characters, whether they would like to admit it or not. Through their bond, Zhevar has inherited some of Chagslar's strength and control, while Chagslar has learned of honor, mercy, and even compassion.

“Hmm, yes Zhevar of Gaskhan! A troubled mind has he, though gifted with Scions he is!”