none
Zaa Ashara is a female Cargura native to Kirioohsk, a planet located in the endless space and far away from any of the known galaxies. Zaa always lived in harmony and peace, with a personal love for nature and adventures. See survived the Mandabit onslaught and managed to escape, ever since living on her own.

She eventually joined the crew of the USS Elgorodaurl during the Lost in Space saga though after an incident she was left stranded in the Finduila Sector and set up her own life as a smuggler, together with her Blua bird.

Zaa Ashara was born in 05 BQF at Kirioohsk, where she lived in harmony and plenty. During her childhood, she often climbed the steps of the many temples, searching for answers and to satisfy her thrist for knowledge and adventure. During her childhood, she grew to be a fine young woman, destinied for promising tutelage. However, the Mandabit arrived and plundered her homeworld. During the initial onslaught, she saw her parents, her brother and sister taken as well as most of her friends. To her horror, the eldest of her kin were simply butchered or eaten alive by the cruel Mandabit. Zaa Ashara managed to hide until they left, full of grieve, sorrow and blame she ran off into the wilderness. Finding the ruins of an ancient temple, she constructed her own shelter, together with her tamed Kiriebra and her pet Blua.

Upon the arrival of the Rambo Nation starship, the USS Elgorodaurl, Zaa talked with captain Lassai Chiakian, lieutenant Corbar and lieutenant Lassa Evaana Penaeli about what happened at Kirioohsk. During their talks the Gorgorian hunters, Malgrim & Grizeala arrived and took Evaana hostage and brought her to Gorgorthrond. A place where the unfortunate lieutenant would be trained and whipped to become a pleasure girl in service of the brutal and widely feared Gorzask.

Together with captain Lassai, they managed to deceive Gorzask, claiming she and Lassai where a couple in search of a pleasure girl that was fresh and inexperienced to enlighten their own pleasure in the act. Gorzask, initially unconvinced was swayed by the wealth Lassai claimed to have and agreed.

Locating Evaana, they managed to beam her out of harms way, escaping Gorgorthrond the Elgorodaurl returned to Kirioohsk for resuppling their food and water resources. Meeting with Evaana in the captains ready room after her debrief, she comforted a crying Evaana who suddenly kissed her. Perplex, Zaa simply watched her leave while she remained behind in the ready room, looking dreamy outside Zaa decided to leave her homeworld behind and join the crew of the USS Elgorodaurl and their search to return to the Cyrandia Cluster.

She later had another conversation with Evaana about what happened, explaining her inexperience with relations she just wanted to be friends. Though before leaving she gave a swift kiss on the cheeck of Evaana, leaving the perplex and dreamy officer behind on the bridge. When the crew arrived at Boronia, she remained onboard the ship as she disliked so much water and rather felt affraid as she couldn't swim. In august of 04 AQF the crew encountered a Cognatus Empire vessel in the Endless Space. When boarding parties invaded the vessel, Zaa was knocked down by an approaching Cogsangui. She was surprised to see the captain had made peace with them and even aided them in their goal to find a way home.

When the Elgorodaurl entered the wormhole itself things went wrong and the ship was send spinning out of control. To make matters worse they found the USS Divide, a Kelvin-Classin an asteroid belt, stranded in the Endless Space while they came under attack at the same time by an enemy unknown.

Zaa managed to evade capture and managed to settle down as a smuggler within the Finduila Sector, taking on any job to get credits so she could buy resources, water and food. She bought her own ship, an old and local design, a CF15A-class. She changed her appearance as well to more local standards and less revealing. In february 21 AQF Zaa was ready to leave Nassau where she was approached by Yvenne Thalyssaera and Hisharo Kyōrisibo and smuggled them off planet. On their direction (and payment) she rendezvouzed with the hooded girl, a person part of the Lusitania Squadron. Zaa later travelled to Home Base where she found herself in battle with her new companions. She contact Schout bij Nacht Jan Michiel Tasman and gave him instruction before she escaped the battle by jumping into hyperspace. She travelled with the dissidents to the Cyrannus Galaxy where she was rewared to become a contracter of the Cyrandia Resistance, able to be called upon for service against payment. Before departing the Loyalists, Zaa said her goodbyes to the hooded girls before leaving to become an employee of a transport civilian freighter company.

She later informed Idris about an impending attack at Loyalist forces on Ozdudrahk when bringing supplies to Raptor Squadron.

Zaa Ashara is a smart and gentle person, with a love for nature and wildlife. Her knowledge of herbs and medicines make her a gifted and promising healer. Her natural thirst for knowledge and adventure made her a bit rash as well, often doing things without thinking it thoroughly. Her atlete build allows her to escape most situations however.

She wears a tunic specially fabricated for her by her teachers, a sign of promising young talents. During her time in the wild, after the onslaught of the Mandabit she managed to tame a wild Kiriebra after she healed the poor animal after being bitten and wounded by hounds. Together with her mount and the mysterious Scion, Blua, her only memory of her past and better life. The Blua was given to her by a space adventurer, after she aided him and healed a gun wound of his.

As a smuggler Zaa changed her appearance, she donned an brown chest armor with a single shoulder pad, yellowish undergarment and a purple colored skirt and brown boots. She finished her attire with a single blaster strapped to her leg. 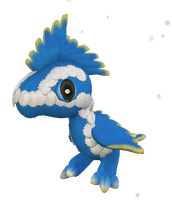 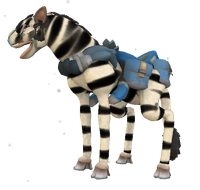 The Png files require the Dark Injection mod and the CamBenColor Pack.