Part of the Gigaquadrantic Hegemony

Subject to the Hegemony

Only the Strong shall survive

Expanding in the Prime Universe

“There is a tumor pouring into our universe, something sinister and dark, the amalgam of our most twisted thoughts and temptations coming alive. I fear that not knowing them may mean that we don't know ourselves enough!”

The Yasuul Legion is a faction subservient to the Gigaquadrantic Hegemony, located in the Mirror Universe, that has dedicated its efforts on the expansion of the latter for millennia. Led by the twisted Lantians, a mirror version of the Civatrons, the Yasuul are a force to be feared and reckoned with, since their bloody history of war and slaughter has forged the lines of the Yasuul into nigh-demonic entities willing to destroy all things just for the sake of it.

In recent years, the Yasuul Legion has an invasion force slowly advancing in the Chandras Galaxy, ferociously fighting on two fronts, led by Warmaster Lagartoss, an evil incarnation of the late Civatron hero. However, the Yasuul's forces are not fully present in Chandras, for it is assumed that a larger force led by Lord Kroc, the Civatron leader's counterpart, is amassing in the Mirror Universe, waiting for another chance at crossing the Multiversal plane and invade in full force the First Gigaquadrant.

The Legion was officially formed by Lord Kroc when the Lantians conquered the Tigris Galaxy with unfaltering cruelty, conquering and eventually exterminating their Yasuul brothers: the Andross and the Juvax. A thousand years later, the Lantian Empire pledged their allegiance to the Hegemony, recognizing its military prowess and superiority. Despite relenting their lordship of the Tigris Galaxy to the Gigaquadrantic Hegemony, they are regarded by others in the Mirror Universe as the greatest warriors the universe has ever born witness to, effectively mirroring their counterparts: the mighty Civatrons.

Signs of Incursions in the First GigaquadrantEdit

Nothing is much about the Legion beyond their origins, thanks to rescued, fortunate prisoners that did not die in their "Extraction towers" during the Psionic War. However, it is now largely known that the Yasuul had had their hand in the Chandras Galaxy before. They are the ones that, through a great deal of effort, manifested the evil psionic spirits known as Neithil, who became their main agents inside the then Krassio Host, knowing very well that their prime universe counterparts were ones of the few species rivaling their power. The Neithil worked hard to disturb the Krassio and grant the bulk of the Yasuul invasion force a chance to traverse the dimensional plane in the Multiverse.

Their endeavors finally became known by psionic powers during the Great Psionic War, when the Neithil saw an opportunity to infiltrate a psionic virus known as the Syndrome that crippled the Xol'Etra, instigating psionic god Singul'Aren to rise and challenge the Xol Dominion, resulting in the devastating war mentioned above. However, no warring faction at that time was able to truly see the origin of the Neithil hailing from an alternate universe.

The Yasuul invasion became clear for the Chandras Galaxy's denizens when they witnessed the rupture of space and time just in front of the Xol capital system Vof Valar during the intense siege on behalf of the Singularim Pact. Scores of psionic leeches and demons poured from the gigantic portal, heralding a massive fleet that attacked Vof Valar, led by Warmaster Lagartoss. The Yasuul Legion was driven back by a combined effort of the Singularim and Xol depleted forces, marking the first time the Yasuul had ever been defeated in combat.

Now, the Yasuul Legion lurks in numerous systems around the mid rim of Chandras Galaxy, but their true origin is one to be afraid of since the Legion heralds the coming of a larger, more powerful force: The Gigaquadrantic Hegemony. If this is ever allowed to pass, it would require the might of a whole Gigaquadrant to even have a chance to meet them at even odds.

Formed exclusively for war, the Legion's purpose is to conquer, destroy, rally, and repeat the process. It would seem that, instead of a monument to the art of war, like the Krassio once were, the Yasuul Legion seems to be a monument to the art of violence for violence's sake. Thus, it is sure to say that the Yasuul Legion has a "survival of the fittest" type of government, where ranks are attained by the rite of combat, slaying their superior officers to attain a bigger rank.

So far, only two individuals are known in the Yasuul leadership. Perfect, evil counterparts of the heroes known as Lord Kroc and Warmaster Lagartoss. Upon interrogating Yasuul prisoners, they are described as being extremely powerful warriors that revel in the spread of violence and conquest. It is (yet) unknown how does the Yasuul Kroc looks physically. 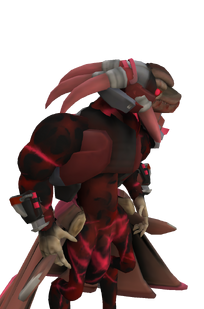 Warmaster Lagartoss, the current leader of the Yasuul Invasion force in the Chandras Galaxy.
Add a photo to this gallery 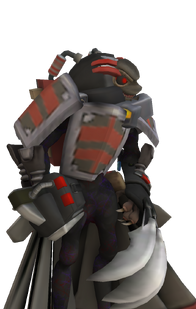 Kharnu "The Unmaker" is a warrior from an unknown species, a warped champion favored by Lagartoss' twisted sense of honor. He leads the Yasuul Blood Fleet in Chandras Galaxy.
Add a photo to this gallery
Retrieved from "https://spore.fandom.com/wiki/Fiction:Yasuul_Legion?oldid=815623"
Community content is available under CC-BY-SA unless otherwise noted.