United Republic of Cyrannus
New Cyrannian Republic
Xora is a female Tezelteän who serves as an officer in the Navy of the New Cyrannian Republic. Xora commanded the Venator-class Star Destroyer, Senator, during the Great Cyrannus War, fighting in battles ranging from the Second Battle of Nosiso and the Battle of Yudumarth. After the end of the conflict, Xora was imprisoned by Rambo Nation and during her subsequent release, was kidnapped by slavers and sold into servitude.

Serving in the slave camp of Xidan, Xora would ultimately be rescued in 03 NE by Claire Rambo, Corva and the crew of the Falcon. After spending a year recovering from her ordeal, Xora applied to join the navy of the newly established Republic, where after three years, she was promoted to the rank of captain once more, gaining command over the Legacy-class Star Destroyer Si-Ri-Mo, named after the fourth President of the United Republic of Cyrannus.

Xora was born on the Tezelteän homeworld, where she lived in peace and relative safety. During her youth, she was often playing outside, resulting in a love for nature and wildlife. When she grew older, she heard rumors of the Federation of United Worlds she wished to join that organisation as an explorer. She eventually joined the space fleet and studied hard to get good results to eventually receive command of a ship of her own.

Xora went to Orbispira where she joined the Navy and received a swift promotion to the rank as captain- due to the Great Cyrannus War there was a shortage on captains. She was given command of the Venator-class star destroyer Senator. In the early months of the war she didn't see much action, mostly guard duties which was fine with Xora.

Hower in the 9th month she was assigned to the Rambo fleet to conquer Yadumarth- a Confederate planet. During the battle the Senator became heavily damaged though with covering fire managed to escape a certain destruction. After the victory she remained at Yudumarth when a month later the Confederacy launched another assault. During the battle Xora was forced to retreat as the Confederate forces gained the upper hand.

After some repairs and she joined Vice-Admiral Rambas II to secure Nosiso, a Confederate planet. During the Second Battle of Nosiso the Senator managed to destroy various Confederate Frigates and aided in the victory for the Rambo/URC allies. When the URC was reformed in the Galactic Empire of Cyrannus, Xora was still in Quadrant 82 and was captured by Rambo Nation forces as the Empire declared the Rambo as enemies.

Saddened by these turn of events she allowed herself and her crew to be captured and brought before trail. After spending a few months in prison she was released (as by that time the Rambo were placed under the protectorate of the Empire. Not wanting to return into the new Imperial navy service, she escaped but during her travel back to her homeplanet she was captured by Saurdoshans near the Quadrantia 82-Cyrannus Wormhole and brought to Sanderhal to be sold a slave at a coming market held by the corrupt and dangerous chancellor of Sanderhal, Xidan. During the eleventh month of 06 AQF, Sandherhal was going to house a large market for various crime lords and slavers. Losing hope at the remote planet, far away from civilised empires Xora grew desperate when she was forced to wear her revealing slave outfit and being placed in a cage for exhibition.

After Xidan, chancellor of Sanderhal walked towards her cage, ordering two of his Saurdoshan guards to haul her out of her cage he placed his hand on hers. Disgusted by the touch of the green skinned humanoid, Xora turned her head away while Xidan took a look at her breasts. Furious, Xidan Xora turned her head away in disgust, refusing to look Xidan into the eyes. Furious, Xidan grabbed her chin and forcibly turned her head so she watched him straight into the eyes. After a sarcastic comment Xidan slapped Xora in the face, sending her to her knees. Placing her hands on her burning cheek, Xora was placed back in her cage. A little while later, a young girl by the name of Claire Rambo was placed in an arena fight with the Saurdoshan Hunter. During the ensuing fight, Voro Acetenus decloacked and freed various creatures and slaves. In the resulting chaos Voro saved both Claire and Xora, together with a Pidarrow he brought them back to the Falcon where Xora was healed by the Emergency Hologram Program and had a talk with Corva, a fellow Cyannian.

Later on, Xora and the crew of the Falcon travelled to New Capricaerón, a planet part of the New Cyrannian Republic. Meeting with the captain of the CRS Valour, Xora thanked Claire and shook her hand before departing.

During the Second Great Cyrannus War, Xora showed her loyalty to democracy by refusing to join the Occupied Republic, and instead pledged herself and the crew of the Si-Ri-Mo to the Revanchist cause. Ultimately, this brought her into contact with the New Republic Remnant, and she was soon assigned to the campaign to liberate New Republic space from the Empire.

Xora is described as an attractive Tezelteän, known for her passion and hot temperament when angered. Yet, unlike most of her people- Xora is quite calm and controls her emotions very well. She is a cunning captain, has a decent insight in battle tactics though lacks any physical battle capabilities. She also like nature and wildlife, and is a great fan of various arts. When captured as a slave, she was greatly hurt in physical strength. As the slavers of Sanderhal managed to break her spirit, her acceptance of becoming a slave was tormenting. Ultimately however, her resolve resulted in her escape and eventual promotion to the rank of captain in the New Republic Navy as the commanding officer of the Si-Ri-Mo. 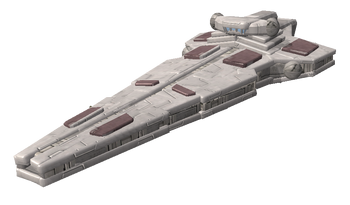 The C.R.S. Si-Ri-Mo is a Legacy-class Star Destroyer currently under the command of Captain Xora. Named after Si-Ri-Mo, the fourth President of the United Republic of Cyrannus, the Si-Ri-Mo honours the strong presidency of her namestake by leading the charge in battle, unleashing fiery superlaser lances from hangar-mounted spherical cannons on both the port and starboard side of the mighty Star Destroyer. The Si-Ri-Mo was commissioned in 08 NE and was assigned to the combined Pax Infinitus fleet under the command of Fleet Admiral Willelmus Cretacea during the Neraida War, being one of the vessels assigned to the campaign in Neraida space.

“You are worthy of my friendship.”

“Not sure about them at all!”

“A fine and capable captain with nice looks”

“A loyal captain in the URC, we must find her and bring her home to the New Republic!”