“... They came out of the darkness swallowing up our former enemies and allies alike. The Xeranbha showed no mercy or weakness...”

The Xeranbha are an ancient alien menace that span space, time and realities. Often equated to an "unrelenting storm", the Xeranbha are controlled by the mysterious black "Purity", a sentient, incurable viral lifeform that directs the unrelenting alien onslaught. Though they have yet to directly influence events in the First Gigaquadrant of modern times, small strains of the Purity virus have mysteriously influenced events across the universe such as the Trucinex War and during the Great Cyrannus War.

The Xeranbha's full onslaught has yet to reach the modern universe, though the unrelenting catharsis has conquered many other of the infinite timelines that make up reality. One of these realities was encountered by a time-travelling group led by Helo Roslia, who arrived in a Gigaquadrant dominated by the Xeranbha. When Roslia and his crew returned to the present, they informed the modern age of the possible threat ever looming on the horizon.

It is unknown where, how and when the Xeranbha came into being. However, it seems likely based on current evidence that Purity was the original component of the interuniversal flood. Speculation leads some to theorise that the virus took form in the aggressive "purity aliens", feral and deadly beings that gestate from selected infected hosts of the virus. These "purity aliens" eventually morph into the final stage of evolution, the Xeranbha themselves. These Xeranbha are of a biological and technological state similar in levels to Ultraterrestrials and in the timeless years after their origins, have spread to conquer universe after universe and timeline after timeline.

Though the Xeranbha remained outside this universe, small strains of the Purity Virus managed to spread its way into the Cyrannus Galaxy. The first recorded incident occurred during the Trucinex War, when a strain of the sentient virus entered the water supply on Nex, infecting thousands of Trucinex civilians. Though this virus was contained, it later resurfaced during the Great Cyrannus War, when a Nosiso Queen managed to infect her drones with the virus, though she was also ultimately defeated.

A far more direct Xeranbha-manipulated event occurred in the closing stages of the Intergalactic War, when the bulk of the Cognatus Battlefleet attacking Capricaerón entered an Oikoumene wormhole in the hopes of entering the land of the gods. Mysteriously however, the wormhole redirected the fleet to a Xeranbha controlled timeline, where it was completely assimilated into the growing Catharsis. A similar incident occurred many years later when an experimental ship developed by the Andromedan Galactic Commonwealth travelled to a Xeranbha-controlled universe, where it was also destroyed.

“By the time the storm reached Cyrannus, the Republic joined our Imperial allies in a final, desperate last defense. Our soldiers fought with bravery and valour. But there was to be no stopping the Xeranbha. Within a few weeks, Orbispira was consumed by the black flood, as was at least half of the Empire's planets and at least three quarters of ours. Quadrillions were consumed into the menace. All hope was lost in the eyes of the citizens.”

In a future timeline, the Xeranbha invaded the entire Gigaquadrant in the year 1100 NE, completely overwhelming it within the space of a decade. Most of the known universe was swallowed up by Purity, leaving only particular areas of the Cyrannus Galaxy, the Quadrant Galaxies and possibly other areas of space unharmed. Mysteriously however, the Xeranbha's "Storm" stopped abruptly soon after hitting Orbispira, resulting in a long reprieve of tense standoff. In 1250 NE of this timeline, Helo Roslia and the crew of the Avenger travelled forward in time to this era and aided the Cyrandian Republic against the threat. When Helo proved to be the only known survivor of the virus, the Xeranbha stalled their advance once more, ominously telling Helo that they would see him again. Captain Roslia and his crew later returned to the present to recount their story.

“I am Xeranbha. Catharsis will be achieved.”

- A "Purity Being" to Helo Roslia.

The concepts of government and politics don't exist within the Xeranbha, which is instead likened to an unyielding storm rather than an actual political entity. Nevertheless, power structures clearly exist in the Xeranbha, with the overlords having a clear position of power over the lower stages of the Xeranbha. Despite this, the Purity Virus itself is the lifeforce of all individuals in the Xeranbha, and though it is sentient, it is unknown if it functions as a collective mind or to what extent it controls the actions of the species within. During a discussion between an Overlord and Helo Roslia in a future timeline under Xeranbha control, the overlord revealed that it was the Xeranbha, perhaps implying a lack of individualism or a central leader.

The Xeranbha are often equated to an unrelenting storm rather than an actual empire. Therefore, the species consumed by Purity generally have no concept of their former native culture. Much like the Neraida Gigamatrix, the concept of individualism is nearly non-existent, though a few infected hosts such as D'anna retain at least some of their former personalities. 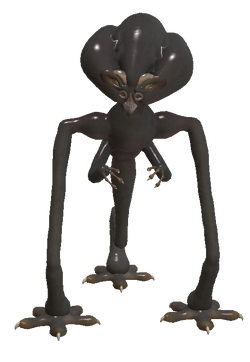 The "Manipulators" are a race that exist within the Xeranbha. Though they appear to be of a lesser position than an Overlord, they are nonetheless powerful members. Like most within the Xeranbha, Manipulators were originally Warriors that morphed into their current form after gestating from a host. Though they do not wield the power of the Overlords, they are roughly as intelligent and often serve as either abductors or scientists before the arrival of a Xeranbha fleet into a new universe ripe for conquest. 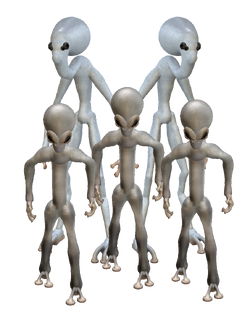 The "Overlords", also known as Purity Beings or Overseers, are believed to be the Xeranbha themselves—the original embodiment of their race. The origins of the race lie directly with the Purity Virus. Once it infects a host Purity will often cause a warrior to gestate from within the host's body. Once conditions are suitable, the warrior will claw its way out of its host and over time will eventually morph into an Overlord.

There are two known types of Overlord, though there doesn't appear to be anything other than cosmetic differences between the two. One is relatively small, with large eyes and no visible mouth while the other is taller and lankier with smaller eyes. When an Overlord contacted Helo Roslia, it claimed that it was "Xeranbha", perhaps supporting the claim that they were the first species to propagate the Purity virus, which like all members of the Xeranbha functions as their lifeforce.

The Overlords are considered to be Ultraterrestrials. 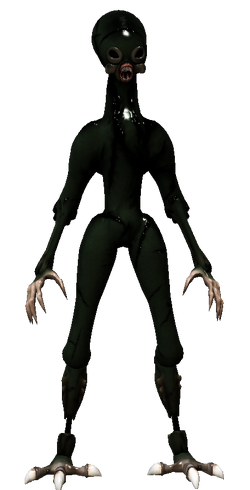 The most simple incarnation of the Xeranbha. Ferals are formed when the Purity Virus causes one to gestate within the body of a host, causing a feral alien to claw its way out of the stomach cavity where it matures. Warriors either retain their form or eventually morph into either an overlord or a manipulator, depending on the environmental atmosphere of a saucer. Though sentient, Ferals do not have language and are believed to speak through telepathy rather than verbally, much like both Manipulators and Overlords.

The Xeranbha have expanded exponentially from their home universe for a countless amount of time. Having conquered many timelines, it is unknown if the Xeranbha occupies these vast spaces or if they simply move on. Though the Xeranbha have conquered the First Gigaquadrant many times in other timelines, they have yet to expand into it in our timeline. However, in a reality experienced by Helo Roslia and his crew, the Xeranbha conquered vast tracts of the universe, stretching from the outer reaches to the Cyrannus Galaxy, with only the Quadrant Galaxies being relatively unharmed possibly due to the presence of Aecor. 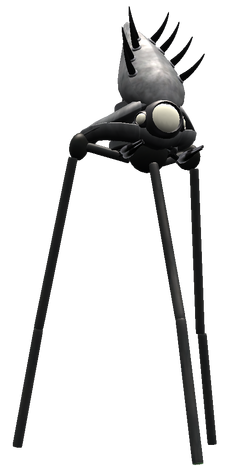 “They landed and spewed the virus all across the planet.”

The Corrupter is a highly advanced bio-machine which, like the Saucer, comes in many different sizes and variations. Often sent as the vanguard of a Catharsis invasion, the Corrupter is often the culprit behind the infection of a world's population with the Purity Virus, turning them into the slaves of the Catharsis, however it is also armed with unknown energy weapons for enemies deemed unworthy of Purity. A large Saucer would often carry scores of Corrupters, with the combined might to invade and conquer entire sectors in a short space of time, coupled with the firepower of the Saucers themselves.

“It was the primary implement used by them in their invasion. They vary in size and have weaponry and shielding indicative of Ultraterrestrials.”

The highly adaptable and feared Catharsis Saucer is the most common vessel used by the Xeranbha, capable of accomplishing feats that would astound even the most powerful of civilizations. Notable for its saucer shaped hull and its maroon colouration, the appearance of the Saucer often heralds a civilization's doom. Unlike many ships, Saucers come in a variety of sizes, from gigantic moon-sized behemoths to small drones only a few metres across.

“The Gigaquadrant has no idea of the shadow looming over its head.”

“Yesterday fortune frowned on us. Tomorrow may it smile.”

“No, no, purity... problematic. They see, they are angry, they do not want their work gone-gone. Yes-yes, kill-kill...”

“Quite possibly the most insidious examples of biological warfare I have ever encountered in my entire life. Not good, not good at all” 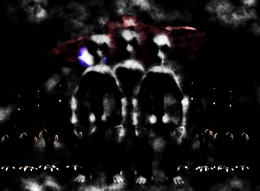 Retrieved from "https://spore.fandom.com/wiki/Fiction:Xeranbha?oldid=860675"
Community content is available under CC-BY-SA unless otherwise noted.