There are many universes in the grand tapestry of reality that is the omniverse. More than a quadrillion have I seen with my own eyes, and many more lie beyond my grasp. How did they come to be? Nobody, not even the Eternal One, knows for sure. Once upon a time, to find some entertainment in my immortality, I sought to find an answer to this question... and I succeeded. The truth I found in the darkest abysms of reality was too terrible to behold.

Indeed, I am no scholar. I am a storyteller. Had you met me before, you would have heard my tales of the Aeons and their unspeakable power, of the Revelation King and the realm he reigned over, of the starfaring warriors of the Ice Worlds... but today, my story will be nowhere as grand. The story of a single world.

But remember, my friends, that Koldenwelt was no average planet, for inside it reigned powers beyond your comprehension. Today, we shall visit the place where ley lines meet...

It had been two days since the beginning of the struggle of the city. The Trilakog, who had stuck to their city, was to be invaded by undead monsters. A people who had kept very much to themselves over the years, not one of them would have predicted these monsters would attack, nor why. But over the two days, the people had suffered from so much horror. Every survivor by now had watched their family be devoured, ripped apart and their homes destroyed, now seeking refuge in the inner part of the city. But as the next great push from the monsters came, it was not long before another army came. The survivors saw glimmers of hope...

That was, until they saw that the other army of live beings was not to come to their rescue. It was geared to destroy them as well.

And the leader, who had identified himself as merely an 'Ordnung General', then followed by millions of soldiers with guns, swords and some who seemed to be mages. But these were no chivalrous knights on horses, but not quite savages, far too organised for that. As the General let out the command to destroy the city and the monsters, the clashes of swords and the fire of weapons tore up the already doomed city even more. The skeletons of the undead breaking apart even more just reminded the few survivors of how little there was left for them.

All the people saw were skeletons battling soldiers and their own, already bloodied city be ravaged further. There was no time to look for the woman and children, no time to ensure they were safe. There was barely enough time to shed tears for them, only to look at the horror that was these two forces facing off against each other.

As the Ordnung General showed himself, the horde of skeleton warriors decided to reveal their leader too. A menacingly tall warrior, with a proud satire, the leader of this force appeared in a burst of flames, though it was only more carnage to the chaos that already ensued.

The 'King of Bones' looked towards the general, fiercely, growling.

Clearly the firey rage built up in Kimorgos, as he growled more. But he laughed. It was more like a rage taken with a pinch of salt; he was clearly enjoying himself. But the fun stopped, as he grasped the general and lifted him up.

The King's eyes lit a burning red, as the proud Ordnung General, who had claimed not just battles but entire cities for decades of war, had his life drained away. The Ordnung fired their weapons - many of which used all sorts of light magic - at the King. But how much did it do?

The helpless Ordnung General tried to pull away from the 7 meter tall monster. Desparately pulling, the King drained his life away in mere seconds, until there was nothing left, crushed his body then tossed it aside, laughing.

And just as an excercise of ego, Kimorgos swung his huge sword at a nearby Trilakog house. He practically tore it apart with a single swing of his blade. And the undead warriors and monsters behind him all rallied through. If they couldn't take Trilakog survivors, they'd take buildings. And if they could take none of them, the Ordnung warriors would fall next. The day was coming to a close, as the Sun was going down, down upon the city, almost as if the Sun had left it behind.

That caused the skeleton army to advice, and it looked like the Ordnung would retreat. They all simply turned from the enemy, backing down, not even turning back to fire their rifle. It was hopeless for the Trilakog, but now too for the Ordnung?

As the carnage ensued, for some reason, everyone felt the atmosphere change. The wind was slowing down, the sky darkening. And when looking up, the Trilakog survivors saw that it was beginning to rain, almost like a thunderstorm was slowly approaching. Of course, now their homes were gone, they had no shelter.

A single Ordnung warrior stepped out, with very little armour, in a black cape, with a sword drawn. He looked up at Kimorgos. Kimorgos laughed.

But the warrior said nothing. His expression didn't change. Everyone stopped, silent, their hearts pounding, having no idea what would happen. Kimorgos, out of arrogance, was waiting for the warrior to make his move. He didn't. And so, the skeleton King swung his sword, but as it came down, it stopped. The warrior's own sword rapidly came to block it. He looked into Kimorgos' eyes.

Kimorgos then tried to send flames towards the warrior. But if they affected him at all, they didn't affect him enough to deter him. In a flash, the warrior had disappeared...but so had Kimorgos' left arm. Shocked by this move, he looked around to see the warrior again. The King swung his blade once more, but the warrior responded swinging his own.

The warrior sent out dark flares around the King, then slashed with his own blade. The King clearly grew annoyed, yet flattered at the same time to fight such a worthy challenger. Their swords continued to clash, until the dark flares exploded, knocking the King back. The King sent out a huge blast of fire, enough to knock the warrior away.

Not enough to kill him. The warrior was gone again, but when he was back, it was on the other side of the King...whose bones were now all cut to pieces, as they lay there, no longer forming the body of a huge King, but just another in the pile of skeletons.

A few hours later, the Ordnung king Goldemar, in his throne, oversaw his new labour force move to the underground. The Trilakog were taken as slaves to their new place, while some were kept in their city for the Ordnung to rebuild it. Goldemar sat there, a fat and small King who clearly had never tasted combat in his life, and never shown any signs of emotion to anyone. It was said that no one has ever seen Goldemar bleed or cry, never heard him upset, nor ever touched him in any way but a handshake, which was strikingly clean. No one had ever seen him do more than laugh and grow fat, while he looked down upon his underlings from his palace.

He wasn't exactly the most competent of kings, and as such, needs advisers. This was where Alareich - his right hand man - came in. An ordinary looking figure, Alareich wasn't one to speak unless spoken to, his mind always seeming to wander as he thought about things no one understood. While it would appear as if he were daydreaming, anyone who requested a response from him would get one instantly. The two then discussed their labour force.

Goldemar's snout twisted in a facsimile of a frown.

Both Goldemar and Alareich smiled devilishly as they were lost in the daydreams of conquest.

Chapter One: The Mystery of the FrontierEdit 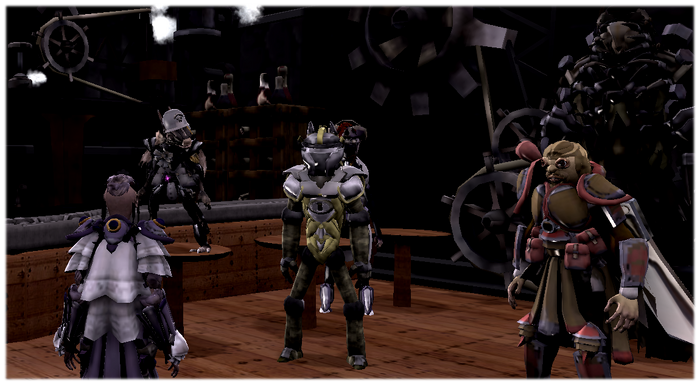 The first part of our story begins in the frozen north, in the Frontier, once a wondrous land - as wonderous as the land ruled over by fascist xenophobes can be, that is. And then- and then... it was... scarred. Devastated, split in half, warped by a sorcerous cataclysm unlike any other - though, if you heard other stories of mine, you would probably know shatterings much grander than that, hah! Since then men came to call the thing that destroyed their... just that - the Scarring - and then, forgot it. Having given name to it, they deluded themselves into believing that they were safe from the cataclysm's further wrath. They were wrong, wrong, but there was only one man who understood that - hah! not even a man, but a boy, yes, like you once were and like I, ages ago in times gone by, was... ah, the memories.

His name was Valdemar, a mage of the Imperial Academy of Saphronia. Once, before the Scarring, he knew a girl named Sefarina - ah, and what a romantic story it was, and how delightfully beautiful their love was!.. except that there wasn't any. They were just that - friends, because you see, the boy was a bookworm and did not really have much time to think about these big things that come in pairs and attract men. Whence the cataclysm came, they were separated - Valdemar escaped, Sefarina, alas, did not. The older mages told the boy that all things in the corrupted land were gone, dead, and the boy mourned his girl - almost as strongly as he mourned his beloved Imperial library.

Then, one day, she came. A girl from the dead north, into his house. Pale, bleeding as if she was impaled on a few spears like a cushion, she knelt before Valdemar and said but one word before dying in his hands.

She was alive, out there in the scarred lands.

It was then when the hero of our story realised the awful truth and strode to find out what really happened to his friend, his home, and, what was most importantly, his beloved books...

Retrieved from "https://spore.fandom.com/wiki/Fiction:Where_Ley_Lines_Meet?oldid=596118"
Community content is available under CC-BY-SA unless otherwise noted.