Control of the Phradox Galaxy, Waging war against the Juggernaut

“Protect the Phradox Galaxy at all costs.”

“We wish you were not destroyed. The galaxy would benifet from your benovelent presence.”

The Watchers Imperium was a race of highly advanced creatures native to the Phradox Galaxy. They are now extinct, but a remnant exists.

The Watchers, themselves are extinct, but the Vapariegals evolved into the Norgon Empire, the AlphaBlue AI Collective is a member of the Rotatcid Alliance, and the Enigmytes disappeared and are presumed to be galactic vagabonds.

Most of their early history is shrouded in mystery They evolved in a region at the very center of the galaxy, near the Galactic Core. Because there were no other space-fairing species in the galaxy at the time that they evolved, they had little trouble expanding into a major galactic power. A majority of their colonies were in the Hieron Arm, Yerucrim Arm (later the Mercuris Arm), and the Galactic Core.

The Watchers also established millions of facilities in all five arms of the galaxy. Many of them were inner-connected by wormhole networks called "tunnels". As many more early civilizations emerged, they began to admire the Watchers, and in turn, the Watchers helped protect them from war and foreign invasions.

Millions of years ago, before the Screebles ascended, they visited the Phradox Galaxy and enjoyed good relations with the Watchers. This close alliance benifitted both sides, and they both gained many new technologies. However, later the Screbles disappeared, and the Watchers were left in the Phradox Galaxy. Further details are unknown, but it is known that Screeble architecture can be found on many Watcher planets. 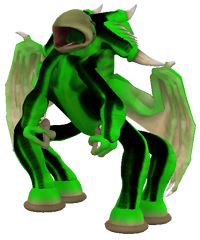 The Pishoiyouanolexitherae, or simply the Watchers, were a race of highly developed creatures that evolved totally naturally, and did not use eur technology to alter their evolution in any aspect. They created numerous technological advances and, during their time, they were one of the most technologically advanced races in the universe.

The Watchers had a stout, short torso with a small, beaked head sporting a large, foldable frill and six compound eyes, capable of perceiving multiple wavelengths on the electromagnetic spectrum. Their arms are relatively slender, yet muscular with three long, bony claws on each one which can be utilized for a number of purposes. Four tentacle-like legs ending in suction-cupped feet allow the creature to walk on nearly any surface. The Watchers also have a pair of large wings with membranes extending between long, clawed fingers.

Their culture revolves around the belief that the races of the universe are inferior and weak, and that they require protection. Their government is a monarchy and also has a council of essence sages. There is also a high importance on aristocratic authority.

The §↨•|•↨§, or simply the Enigmytes, were a race of energy-based and highly advanced organisms that were formed at the dawn of their universe by reactions caused by colliding matter and antimatter. They lived in their universe for many hundreds of years, gaining much advance in technology as they expanded to control almost their entire pocket-universe. But, soon after that, the Enigmyte universe began to collapse and, unknown to them, fuse with the Juggernaut Overworld universe.

The Enigmytes have slander, humanoid bodies with a wide chest and thin hips that allow for a wide range of movement and makes them quite agile. They have several crests on their heads and sport sharp teeth and eyes that can detect infared, visible light, ultraviolet, as well as dark matter and energy. They have thin, and partially muscular arms and three clawed fingers as well as opposable thumbs. Their muscular legs have flexible ankles and suction-cupped feet that can grasp a variety of surfaces. They also possess a single nucleus that performs most functions in the body.

Their culture is a benevolent and justice-oriented society. It is centered around a Grand Preator and four other Preators who govern areas of space. They believe that alliances benefit both sides and they mostly are peaceful, causing them to dislike Militocracy. 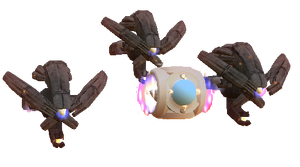 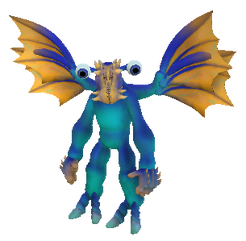 The Watchers Imperium sees themselves as superior to most other lifeforms, and they view the rest of the universe as pitiful, and they feel the need to protect all of the weaker life. This causes them to hate the Juggernaut Armies, and most other militocratic organization.

The Watchers have a very organized and orderly government that sets up strict rules to govern and protect the rest of the Imperium. There are many "sectors" of the government where different rulers have power.

Imperial Magistrate Harpons'Ananan, leader of the entire Imperium
Add a photo to this gallery

Grand Praetor Rata, leader of the Enigmytes and the Home Sectors

Praetor Selvens, leader in the Milky Way Galaxy and the Uncharted Sectors

Praetor Xelon, leader in the Cyrandia Territories
Add a photo to this gallery

"Allies, in our quest for justice!"

Retrieved from "https://spore.fandom.com/wiki/Fiction:Watchers_Imperium?oldid=598377"
Community content is available under CC-BY-SA unless otherwise noted.