The War of Arbitration

Juggernaut Conquest on the Universe

This event is not entirely a War, but a series of interactions that cause and result in the War of Arbitration itself. The main conflict will be the Watchers Imperium versus the Juggernaut, with other empires such as the Great Temoin Empire manipulating the sides to their choosing. The main plot will mostly be written by the War's administrators, although, anyone who joins here may discuss subplots and write them if they are approved. There are a few rules, such as no enormous invasion forces with billions of ships without administrator approval, and always check to see if you are able to write your subplot. 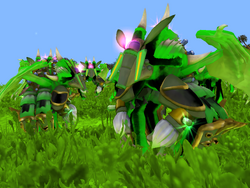 The Pishoiyouanolexitherae War lasted for many years before finally coming to an end. Billions died during the long conquest, but at the during the darkest times of the War, the Watchers united all into one faction, the Watchers Imperium.

The Watchers Imperium eventually met new species. These species would join them in their mission to help the universe prosper for as long as it is in their hands to do so. But, as the forces of order keep universal peace for a very long time, the evil Juggernaut Armies, led by a near-omniscient hive mind, conspire against the Imperium and plan to rule the universe with an iron fist.

But, the Imperium will not relinquish their defense of the universe, and blood will eventually be shed...

A Juggernaut of Awesome Power Edit

Somewhere, in a dark, secluded area outside of the universe..


All of the various, alien figures in the room were bowing to a platform in the center of the room. The platform was encased in a gigantic, glass, tube which clouded it from view. The glass tube lifted to reveal a mass of contorted flesh with seven surrounding tentacles that extended to the walls. This gruesome creature was, in fact, the Hive-Mind of the Juggernaut, a massive conglomeration of various races from different universes. When it spoke, it spoke in a contorted, deep, low voice that seemed to emanate from everywhere and penetrate the minds of the creatures inside.

All of the creatures in the room rise and the frontmost one, whose name is Orgas, begins to speak.

Everyone bows again, and one-by-one, they all leave the room. Then, the Hive-Mind begins to contemplate to itself.

And, just as he is speaking to himself, several scout ships travel through the wormhole, and to the planet Whiprastus to analyze and strike fear into the population, and no pathetic lifeforms would be able to get in his way...

An unidentified ship landed on the planet Whiprastus and an Enigmyte task force was sent with an important individual called, Praetor Selvens. Praetor Selvens was one of the five Praetors on the Enigmyte Council, and he controlled the Uncharted Sectors in the Imperium. The taskforce landed on the planet easily and set up a small camp in one of the few buildings on the planet. The ship seemed to be projecting some sort of sensor-supression field about ten meters around the ship in every direction, so the lifeform and technology sensors were unable to detect anything in or around the ship.

Eventually, a taskforce of both Enigmytes and another, humanoid species called Namus were sent down to the unidentified ship to investigate it with a scientist. The taskforce approached the ship slowly, with a sniper tower covering them from behind. The commanding officer, General Oresh, was tentative as an officer approached the ship.

The Officer continued walking, albeit hesitantly, toWards the ship and touched it with the tip of his finger. Suddenly a bright light appeared and several small creatures with four legs, two arms, a beak-like head, and odd-looking backpacks appeared. The, a portal opened in the sky and two other ships flew out, and species of several different types landed and began to assemble before the scientist in the Enigmyte taskforce.

A flurry of activity populated the area all around the ship as multiple more ships began emerging from wormhole-like portals that kept appearing, dispatching more and more alien creatures, until there were well over sixty aliens of different species.

Many of the unidentified alien creatures began to gather in front of the scientist, who had a very excited look on his face and was bursting with anxiety to make contact with these odd creatures, their faces expressionless. After a moment of silence, the scientist spoke.

Immediately, the aliens with weapons all turned, and fired their energy-based weapons at the Enigmyte, killing him on the spot. The taskforce immediately ran and began firing back at the alien forces as they were being pursued. The snipers in the tower behind them, immediately began evacuating and shot backWards in a frantic attempt to Ward-off their alien attackers.

They only just managed to enter the base's perimeter and activate the deflector shield before the aliens were able to capture, or kill, them.

The Juggernaut besieged the fortress on Whiprastus for three day before finally managing to weaken their defenses somehow. But, the Namu strikeforce was about to receive reinforcements.

A few hours later, a fleet of about six ships arrived and began immediately attacking the alien fighters.

Just a moment later, a stream of lasers ripped through the fleet from above, and the men saw an enormous ship at least twenty kilometers long looming over the planet. The strikeforce knew that they had to get out before that gigantic ship got to them and ripped them to pieces. They knew that there was an evacuation shuttle at the bottom of the bunker, but there was also the challenge of escaping the planet itself. They boarded the shuttle and took off and their seemed to be no opposition and the alien fighters just appeared to let them go. They cruised clearly for a while before meeting up with an alien ship that sent them a transmission.

Then, they detected atomic excitement behind them and saw a gigantic excavation beam heading toWards them and incinerating the ground as it went. The shuttle immediately shot strait up and exited the atmosphere and went into hyperspace, just before the gigantic ship incinerated the space they had occupied not a minute before...

The Rhuaiden and Malernum were two advanced tribes native to the planet that controlled huge empires with millions of systems in the Phradox Galaxy. The two tribes had been at odds for hundreds of years with two vastly different and sometimes opposing cultures. The Rhuiaden were benevolent and protective of weaker races while the Malernum were aggressive and crushed any civilization in their way. The two had minor skirmishes over the years, but when the Malernum attacked a Rhuiadin civilian planet and left all of the surviving natives as refugees struggling for shelter, the Rhuiadin swooped into action in order to defend the helpless and homeless refugees.

They sent a diplomat to negotiate a truce with the Malernum. The two delegates met on a flat plain between Rhuaiden and Malernum territories. The two approached eachother and began to speak.

The Malernum, who towered three feet over than the Rhuiaden, glared at him in silence.

The Rhuiaden reached to his back to pull out a scroll with a treaty on it when the Malernum roared loudly and lunged forWards, plunging his Triblade into the Rhuiaden's body, killing him instantly. The Rhuiaden army, the Gold Eagles, saw the fatality and plunged into action.

The Gold Eagles moved in and used sedative tasers to incapacitate the Malernum and take him into custody before the bulk of the Malernum, who had superior soldiers, arrived. As the Gold Eagles evacuated, the Commander of the Red Vultures a special regiment of Malernum watched them depart and then walked away slowly.

He boarded his ship and left the planet. Shortly after reaching space, a strange, alien ship approached him and a blurred transmission was received.

Meeting of the Truce Edit

In preparation for the eminent Juggernaut invasion, many powerful races of the universe decided to meet to declare a state of truce and alliance for mutual protection.

They chose to meet on the Watcher homweorld of Rhigheus to discuss possible battle strategies and contingency plans to stop the threat looming on the universe...

The armada of Katakti̱tés ships moved slowly through the endless void of the Dranscius Universe to locate a quantum-singularity that will lead them to a location near the Phradox Galaxy.

The transmission was cut as the fleet moved ever-closer to the singularity. Vorbote, a hyperintelligent, sentient machine was massive, larger than the other armada ships. He originated from the void between galaxies, and was called a Titan for his size and strength. There was only one of his "species" present, himself, but there were billions more, and they were waiting...

The Katakti̱tés fleet split ways when they reached normal space in the First Gigaquadrant, and only Vorbote continued on the course toWards the Negaspace Void in between the Milky Way Galaxy and the Andromeda Galaxy. This was where the rest of the Titans lay in hiding for millions of years. He navigated to a lone star, not in any galaxy's gravitational pull, and traveled to the chronosphere of that star to find millions of gigantic, synthetic, hibernating machines waiting to be reawakened. Vorbote emitted a mental signal that awakened all of the machines, who instantly became self-aWare and began preparing for the invasion.

The massive armada begins to slowly approach the Milky Way as they spelled the doom for all organic life, and they plan to control all of the life in the known universe...

On the Namu planet, Gerillum, life was going on as normal when the sky became cloudy and dark. Many civilians looked up at the sky to see a large shadow descending from the clouds. As is descended toWards the planet, an unusual sound was heard, frightening the natives of the planet. As the shadow came closer, the sound got louder until it was so loud, that it was the only thing anyone could hear. The planet's ships began closing in on the area of the descending object as it got ever-closer to the ground.

After several minutes of descending, the object was almost at the ground. It was now in visual range of the ships and citizens on the planet. It was a large ship, with an elongated body and several arms coming out of the front. As it neared the ships a single laser beam fired, tearing through several of the ships at once.

The mysterious ship continued around the planet in an unstoppable onslaught until every single city and ship on the planet was left in ruins. The ship abducted only one Namu and began to communicate with it...

“Look at this universe. Broken and shattered. Only the light of justice can save it.”

“We are on the verge of extinction! What kind of universe is this!?”

“We will assist the Juggernaut in destroying the Watcher's Imperium. At all costs.”

“Hm... This War would be a good place to expand my interests, yes.”

Retrieved from "https://spore.fandom.com/wiki/Fiction:War_of_Arbitration?oldid=607919"
Community content is available under CC-BY-SA unless otherwise noted.