Unknown (too difficult to understand)

Legion of the Deathmarch

The Vyro'Ralza, better known as the Traffphyds, are mythical mysterious and malevolent watchers of Time, whose role is as destroyers of all its anomalies and abusers. Opposites of the lawful Vyro'Narza (or Taldar), the Traffphyds are apathetic and emotionless beings who know nothing other than their task.

Fall of the Imperium Edit 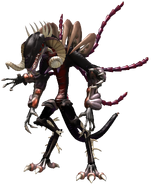 Retrieved from "https://spore.fandom.com/wiki/Fiction:Vyro%27Ralza?oldid=765504"
Community content is available under CC-BY-SA unless otherwise noted.