Emerging from their homeworld of Nammud Xar on the turn of the 22nd millennium BC, the Vranntan Order was formed out of the planetary unification of their species under the rule of an individual historically known in their race as Nammud; the Vranntan themselves owing much of their culture to Nammud and treat him almost like a deified ruler. Though united, the Vranntan remained violent and prone to war, and spread throughout the Pal-Tala sector quickly in order to mine resources from nearby planets. As their species' work ethic evolved rapidly, so did their methods of technological advancement and the will to use it upon whomsoever would stand in their path. This effectively sparked multiple wars across the Pal-Tala Sector, and, with the frighteningly progressive advancements of the Vranntan, knowledge of their war efforts and the effective conquering of the regions within the Pal-Tala Sector was brought to the attention of the Nanusuloan Convocation and the Asilaphean Empire.

The Vranntan then sought to expand their borders to the point where the entire southern end of the Schism was under their control; whilst such a plan was feasible, the Vranntan Order had become subject to attacks from the Asilaphean Empire as they were guarding the early Sumikian Commerce Nexus, and thus their northern borders remained weak to a plausible Congregation attack. A number of skirmishes occurred in the millennia afterwards, including many other conflicts with the Nanusuloans and the Asilapheans. Without many locations to expand towards, the Vranntan slowly began to suffer from a resource crisis that was solved by the formation of the Nijusi Syndicate - Tuk Nijusi, a Sumikian crimeboss became aware of the Vranntan's military might and staged a coup against the Sumikian Commerce Nexus in the Xittan-Yaton Sector, and economic cooperation began between the two states and remain strong to the present day.

Over the years, the Vranntan's relations with the Nanusuloans have improved marginally, although they maintain very hostile relations with the Asilaphean Empire, the Sumikian Commerce Nexus of whom they have warred with for generations.

The Vranntan Order is ruled by the Chanvokk; which is translated roughly to Warlord or more commonly War Arbiter. The Order is built upon a kratocratic regime, and whilst many of the War Arbiters tend to exercise an extensive reign, it is considered a rite of succession to successfully seize and overthrow the War Arbiter so that another, stronger individual is in power. Since the methods are considered primitive even to the Vranntan, the War Arbiters have the freedom of electing advisers to maintain loyalty towards the War Arbiter - although loyalty of advisers is variable, and it is within the War Arbiter's power to execute those that may show hints of defection. 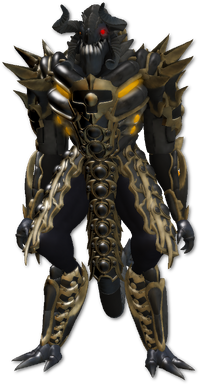 Hrantaec Chanvokk of Nammud Xar is the 444th and current War Arbiter of the Vranntan Order. With over a century of rule under his belt, Hrantaec is regarded as one of the more ruthless and successful of the War Arbiters, using a highly xenophobic and organised rule to remain in power. Under his rule, the Vranntan Order has seen a sharp rise in economic figures, and the production of the Vranntan's overwhelming military has only become larger. The Tuuros Galaxy, including Tuk Nijusi - his current economic partner - fears that Hrantaec will use his excessive force to conquer the Nijusi Syndicate and begin a course of warring against the Tuuros Galaxy in such a manner that it may never truly recover from the losses.

Ammakkut was one of the several Warlords ruling under the War Arbiter. Known well across the galaxy's black market for his interest in precursor technology, namely Zhulultu technology, Ammakkut had a ruthless desire to procure technological might to add to his military power. Ammakkut was also well known for his augmented cybernetic right arm, a weapon of Vranntan design attached to him after he lost it in a bloody battle against the Asilaphean Empire. Ammakkut was in fact one of the more reasonable Vranntan Warlords, but with a fleet of nearly 40,000 ships under his command, was also one of the most intimidating.

Ammakkut was slain in battle by Lord-General Sarhadraxantal in a battle that would spark the events of the Tuuros Galactic War. 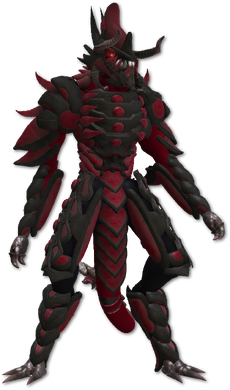 Kkannahrar is a notoriously brutal Warlord who has made his mark on the Tuuros Galaxy by creating a no-fly zone within several hundreds of light years of the Vranntan Order's territories facing the Nanusuloan Convocation. Kkannahrar is known for his greater devotion to Zahamantas than Hrantaec, and has committed atrocities across the Tuuros Galaxy that has warranted disgust from even the Asilapheans. Kkannahrar is not held in high regard by his contemporary Warlords, despite having served longer than most of them. He is rarely contacted by them due to his fanatical and unreasonable demeanour.

Ammkkarad, Kkannahrar's homeworld is a stronghold of nightmarish stories - bearing no honour towards slaves or his enemies, Ammkkarad is decorated with corpses of military leaders who have fallen to his superior savagery, as well as a series of slaves executed en masse to intimidate the extant population. Kkannahrar rules with a sense fear only normally witnessed within the confines of the Asilaphean Empire, with some believing that his cruelty exceeds that of the genocidal machines.

With a territorial expanse of approximately 572,500 systems, the Vranntan Order effectively controls the Pal-Tala Sector, and multiple sectors surrounding it, including the Schism have buffer zones to prevent an invasion from the Vranntan themselves. Under Hrantaec's rule, the Vranntan Order has seen a stronger territorial organisation, placing multiple subordinates in control of regions of space. The centre of the Vranntan's activity, and their capital is the world of Nammud Xar.

While the Vranntan are ultimately isolationists disregarding their policy for aggressive intervention, they believe that the acquisition of a Black Sun Device or multiple would increase the speed of their production a hundredfold. There are also sentiments among the Vranntan that possibly selling off energy sources stemming from a Black Sun Device could prove economically lucrative and possibly compete with the Nanusuloan Convocation on energy production.

A culture built upon the power of an individual, Vranntan culture harbours a cruel yet ceremonial nature to the outsiders of their Order. What is known as the attacchanak nammuduk, or the Code of Nammud comprises the constitution and laws of Vranntan society. It is written within the Code that the worth of a Vranntan is measured by both physical and mental fortitude. Vranntan society is mostly feudal in nature; a Chanvokk is considered the overseer of the Order's eighty-four Katuvokku that control the astrography and assets of the entire Vranntan Order. Whilst the Code is ubiquitous across the Order, Warlords live by their own constitutions that ultimately do not differ massively from each other. There are however a small number of Warlords whose constitutions entail either a more violent or relaxed rule.

The Vranntan adhere to a more modern religion in the belief of their first War Arbiter known as Nammud. Nammud is deified within Vranntan culture and is referred to as a war god to many - in reverence of Nammud, their homeworld was renamed to Nammud Xar after his death. The name of Nammud is used often in war cries and death rites. The belief in Nammud however is an extension of the older native religion of the Vranntan, which is another monotheistic belief in an older war deity known as Zahamantas - as Tuuros is a violent galaxy, Zahamantas to the Vranntan was the galaxy incarnate. In more modern nomenclature, the Vranntan name the galaxy as us'zahamantas, or 'The Eye of Zahamantas'.

“Pitiful primitives. Always running into our guns and believing they are bulletproof.”

“Where Zhuleshxi has failed, I will succeed. You will destroy in my name. There is no alternative.”

“If and when the Schism threatens Tuuros again, the Order may be useful in pushing it back.”