I will take upon any job, if the price is right!

none, independant
The Syndicate

The Sepherian known as Vezktan is a green colored Sepherian, instead of being white colored his green colouration suites his sickening attitude well. Known as the Sickening Smile he is ruthless, shows no compassion and is feared by many within the Cluster. His goal, to satisfy his endless hunger for killing victims, he kills for money or just for fun and is very unpredictable. A new kind of danger is set loose upon the Quadrants!!

Vezktran eventually found his way to Nal Amroth and became assosiated with the Syndicate. Gaining a notorious reputation as one of their most brutal and gruesome employees. 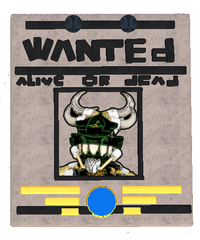 Vezktan was born in the sewers of the homeworld of the Sepherian, his date of birth unknown. First records surfaced of Vezktan around 05 BQF, when he killed his first Sepherians, investigation soon proved he killed to satisfy his hunger for death as he didn't rob his victims, all valuables were still at them. He then killed over 25 Sepherians in a matter of weeks before he was captured and send to jail. Somewhere around 05 AQF/02 NE he managed to escape authorities, stole a Serindia Gwylliöen Class and went into hiding within the Unclaimed Territories, waiting his next chance to still his endless hunger! Among the way, he stole a blaster arm plate, as well as various knifes he keeps hidden underneath the plate. within the following weeks he gained a reputation as mercenary and bounty hunter, taking upon any job if it involved killing, no matter if the price was low or high Vezktan would take it.

Due to his notorious reputation and cruel ways to kill his prey, the Sepherian goverment pledged Rambo Nation to take Vezktan into custody, Rambo Nation complied and issued a "Wanted" for Vezktan due to his possible schizofrenic outburst and danger for the public.

During the 10th month of 07 AQF, Vezktan aligned himself with the re-formed Syndicate and became one of its assassins. Afterwards, he was send on the first Syndicate mission together with the Saurdoshan Hunter and the Muunilar bounty hunter Emtor to infiltrate the royal palace of Rambo Nation in Tirithsilliana. The mission, a joint operation with operatives of the Cyrannian Syndicate and the Vengeful Claw was to assassinate the high profil leaders, Ramashe, Apollo and the young Maryah to disturb the diplomatic meeting and cause war. The mission failed due to various factors, during the ensuing battle one of the ornate and expensive chandeliers fell down upon him, when rising again he was hit by Maryah who used a plate against him. Later on, Vezktan struggled with the Royal Guard of Rambo Nation before eventually retreating. He was amazed by the healing powers of Kara and the magical powers of empress Ramashe.

In june 08AQF/NE, Vezktan was part of a group of bounty hunters that took various New Republic senators hostage at Mou'Cyran. While the others were taking senators hostage and making their demands to president Nexarón Valkistair, Vezktan was placing bombs within the building. With the sudden arrival of Ryen, the bounty hunter regrouped but soon abandoned their "leader" Agrehele to face the warrior alone. Thus allowing himself and the others to escape the building unharmed. With the destruction of the building and the following chaos, Vezktan watched the senate building explode with a lot of joy and satisfaction and remained at Mou'Cyran for a while.

Vezktan is a sadistic and cruel person, with a sickening hunger for killing he is dangerous and unpredictable person. He doesn't show compassion to his allies or enemies, though can feel something for certain things. There are rumors when kiling his victims or prey, he drinks their blood and keeps their hart as trophy within his stolen vessel.

Vezktan is very agile, uses his tail as whip and though quite thin, he posseses tremendous physical strength.

“I wish to drink your blood and take your heart as trophy!!!”

The Endless Hunger is a space freighter, a Gwylliöen Class once build by the Serindia at the Shipyards of Rowar. Vezktan stole this vessel while he escaped prison at Sepheria and since then equipped it with weapons, torpedoes and decent shields.

The Endless Hunger is not very agile nor fast, but sturdy enough. The Endless Hunger has a small bridge, a small hangar bay and two sleeping quarters for the crew, with one being turned into the trophy room of Vezkan. It also features a small kitchen where Vezktan does terrible things.

The ship has a lenght of around 52 meters.

“For the sake of the cluster, I hope the authorities bring him to justice!”

Retrieved from "https://spore.fandom.com/wiki/Fiction:Vezktan?oldid=731739"
Community content is available under CC-BY-SA unless otherwise noted.