The Vexo Club is a major and well known club within the Space in Between and surrounding sectors- centered at the planet Lareg. Primary based upon the entertainment of people, the Vexo Club actually consists out of various establishments and features a well known logo, a well curved human female in a seductive manner with glowing red lights. It is located within the pleasure district of Lareg City on Lareg, the planet of joy and pleasure.

The Vexo Club falls directly under the control of its CEO, a figure who is not well known and rather remains unknown. The Vexo Club consists out of the following profitable establishments: 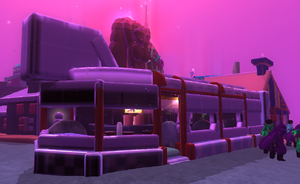 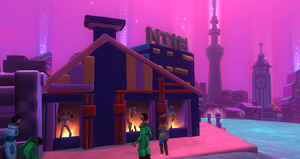 The Vexo Club is a well known establishment at Lareg and its surrounding sectors, founded circa 2300 it is one of the oldest companies within the Space in Between. Over the course of history, the Vexo Club establishments became popular amongst travellers and traders, as well amongst tourists to visit the planet of pleasure of joy. Within the Club the use of recreational drugs that increase senses of pleasure are tolerated and can even be distributed thorugh the club. Though the toloration and distribution brought the Club in various embarissing situation with the illegal import of it with the local authorities.

Around 2850, the criminal slug known as Slugger and his sidekick, Qarley became frequent visitors to the Casino.

The following individuals are associated with the Vexo Club in various positions or jobs.