“You have death gangs like the Unseen Blades, the Death Brethren, Knifebrokers...Vein-Eaters, Venants and Last Breaths - they're all formidable to boot and you'll find mercenaries going between them for a decent pay. But then you have the Vaekalas - mercenaries don't join them. Mercenaries don't know where they are. They're the galaxy's most efficient killers, and you'll find the big shots in the galaxy probably have an agent on speed dial.”

Established on the turn of the twenty-eighth century, the Vaekala Brotherhood first appeared on high-influence worlds - Asilapheos and Sumik among others through the instances of calling cards after several high-profile assassinations that had left Asilaphean and Sumikian politics in disarray for several years. The Asilapheans initially regarded the assassination of their officials as an act of the Nijusi Syndicate and had caused an even further deterioration of their relations and brought them to the brink of war on the Xittan-Yaton Sector border. Whilst possibilities of a war were mitigated by the mediation of the Nanusuloan Convocation, the Nijusi Syndicate were no longer considered suspects of having controlled or hired the Vaekala Brotherhood as one of Tuk Nijusi's board directors, Pas Kajuri was assassinated by another member of the Vaekalas.

Pas Kajuri's assassination had internally destabilised relations within the Nijusi Syndicate; some of Nijusi's subordinates believed that Nijusi himself had hired an assassin to kill Kajuri, whilst others thought it may have been another member of the board. It was concluded as improbable that Nijusi would have hired the Vaekalas to assassinate one of his directors, and multiple enquiries were carried out to find out the culprit, although to no avail for a number of years. During the years of the War of Ages, some Vaekalas were pivotal in destabilising The Congregation's outer territories by killing off leading military officials, eventually causing a recession of the Congregation's territories back towards the Schism.

Following these years, security on Asilapheos has increased - however this has not staved off Vaekala activity upon the planet. Since the establishment of the Tuuros Festival Games on Nijusisumarec, Vaekala activity across the Frontier has increased. Some independently controlled strongholds, such as Hol Hallar have become a hotbed of Vaekala activity, with a small number of Vaekala having been killed between 2800 and 2810. Some leading enemies of the Vaekala believe that their base of operations is within Hol Hallar, although due to the extremity of criminal organisations convening upon the planet, such claims are currently vague at best.

The Vaekala Brotherhood is the Tuuros Galaxy's most feared and secretive organisation of assassins and bounty hunters. Whilst some Vaekala operatives are galactically known by their codenames, nothing is known of the history or true identities of the Vaekalas themselves, which is highly uncharacteristic in comparison to the relative openness of the rest of the galaxy's organisations of a similar medium. The Vaekalas are extraordinarily difficult to contact and it is only though that the leaders or high ranking generals of criminal syndicates, such as the Nijusi Syndicate, have ways of contacting them due to their involvement in Tuuros' vast underworld. The Vaekalas are thus considered natural rivals of many other criminal organisations - lesser organisations go as far to make temporary alliances to apprehend Vaekala operatives or to extinguish activity in potential territories.

As they deal primarily with death, Vaekalas are considered the galaxy's most efficient killers, and proportionately, the price of Vaekala contracts exceed other prices to an extortionate level. Though named a brotherhood, Vaekalas are known to have female operatives in their numbers. Vaekalas are normally associated with high-profile assassinations which befits their charge - their methods of killing are vast, and are often untraceable once having carried out their contract. 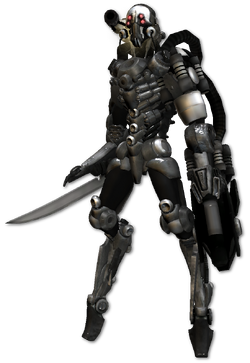 Anamaxinaras or Anamax is an Asilaphean Vaekala; considered one of the Tuuros Galaxy's most dangerous assassins. Having been modified physically during his tenure as an assassin, Anamaxinaras barely resembles an Asilaphean - much rather now equipped with armament that makes him near enough a one man army in most situations. With a price of over twenty five billion units on his head, Anamaxinaras is one of the Tuuros Galaxy's most wanted individuals; although very few are intelligent or insane enough to pursue the task and survive. 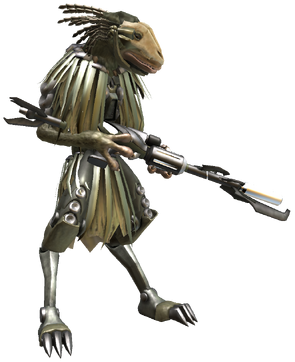 “A hunter is taught to put one's prey out of its misery. The poor fool in the other end of my scope never gets the chance to feel such things.”

Hahrani is a Tuk'Khordaq Vaekala renowned for his skills as a sniper. Believed to have been purchased from the Ezesi'i in his childhood, Hahrani has gone through numerous genetic and cybernetic augmentations; leaving him to bear only a vague resemblance to a Tuk'Khordaq. Named after the ancient Tuk'Khordaq god of war, Hahrani is every bit the warrior his name entails, being an expert in both long and close ranged combat. This is further enforced by him carrying a rifle traditionally used by his people - which is also able to be used as a polearm when threatened in close quarters.

“There is no true honour in killing one quietly. Us Vranntan desire challenge, and we will kill when our opponents look at us. The Vaekalas are cowards; there is no glory in death without war!”

“When one of our own joined the demons known as the Vaekalas, it makes what we have fought to design appear frail. They must be eradicated from the galaxy if order is to be attained.”