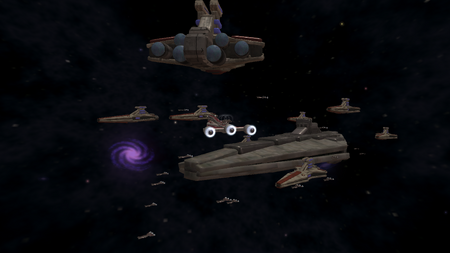 The majority of URC ships are based on Star Wars

The Republic Navy is the primary space force of the United Republic of Cyrannus. It controls many large and powerful ships and its might is rivaled by few. It generally works closely with the navies of the DCP and Rambo Nation in various conflicts across the cosmos. The captains that serve in the navy can be seen here. The Navy is headquartered on Cyroenia, but central power is in the government of Orbispira.

The Mandator Class Star Dreadnought is a scaled down Majestic-class. At 8 kilometers in length, it is still a sight to behold. The ship is made in the shipyards of Cyroenia and is a common flagship for high ranking admirals.

It is said that the Mandator Class is worth well over five hundred Venator Class Star Destroyers in a battle, however its large size, prevents it from being mass produced on the scale of its smaller cousins. The most famous example of the Mandator Class is the Pride of the Core, origanally built by Cyreonia shipyards, it rests under the command of Supreme Admiral Nagala and it is the flagship of the entire Republic Navy. 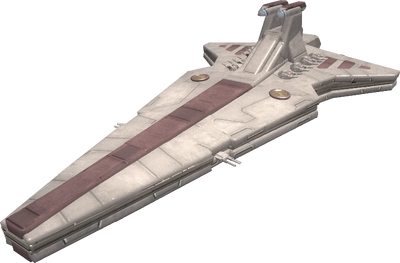 The Venator Class Star Destroyer is the primary warship of the Republic Navy. As the successor to the Hunter Class, it can be seen in all Republic Fleets, often operating in threes.

The Venator is produced by the famous Cyroenia and is an often seen cruiser of fleet admirals. The cruiser can hold hundreds of star fighters and thousands of troops to bring into land battles.

The ship holds thousands of weapons and is a force to be reckoned with. Flagship Venators often have red conning towers to separate it from other cruisers.

The Victory Class Star Destroyer is one of the deadliest URC ships ever intended for mass production. Although smaller, slower and less common then the Venator Class, the Victory has more destructive weapons, making it a prime warship in the Republic Fleet.

Altough newer then the Venator-class, the Victory-class is not as popular with commanders, however it is popular with captains with a desire for firepower. It is a prolific ship-ship combater, but it is also adept at planetary bombardment. The ship holds three squadrons of X2 Starfighters and one squadron of Y-Wings.

The Legacy-class Star Destroyer is a pure battleship used by the URC, which means that it wasn't designed to carry starfighters like the Venator-class. It has superior firepower and superior armour to its more common cousin. The Legacy-class itself is over 1,400 meters long, which makes it rather large compared to other star destroyers used by the URC, but because it is more specialised then the Venator-class it is less common in battles.

Often commanded by top ranking admirals, the Legacy-class is perfect for leading other ships into battle. When in tricky situations, the ship can charge all of its weapons to deliver a dangerous blow, at the expence of its shields and engines. 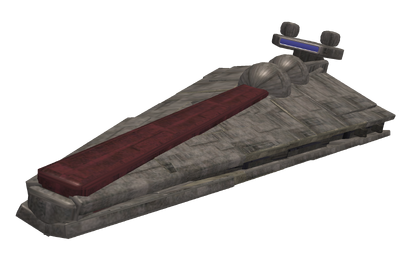 The Restrictor-class Interdictor frigate which was desinged to fill the role of the Interdictor in the Republic Navy. The Frigate itself's primary function is to create hyperspace interdiction fields which prevent enemy ships from retreating by use of hyperspace or warp, but it is also armed with four plasma mortors and three heavy laser canons. The starship also includes a small hanger from which it can launch shuttles, or a small squadren of fighters.

At 700 meters long, it is a relately large ship with very advanced weaponry. 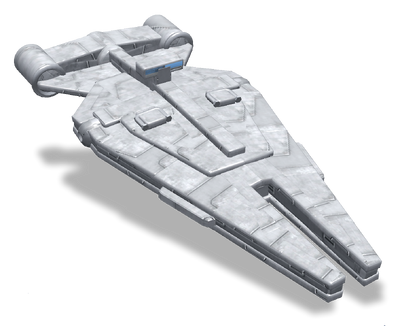 The Arquitens-class Light Frigate is a very common star cruiser used by the URC in many conflicts, such as the recent Great Cyrannus War.

The ship itself resembles a cross between the Venator-class Star Destroyer with the engines of the smaller Ambassador-class Corvette. The Chancellor class is often seen backing up the larger Star Destroyers of the Navy and can take and deal a lot of damage in a battle with its relatively strong shields and reactors, and its many weapon emplacements.

The ship has a special ability were it can fire all its weapons at full power at the loss of its shields and maneuverability.

She is expensive to create, as she comes with luxary rooms, science labs, astrometric lab, sick bay and even a small hangar where flora can grow and be studied. Though she has a lot of room for scientific purposes, she is equipped with heavy weapons. The various scientific purposes were equipped with aid of the URC allies, the Rambo and effectivly making this class able to function in battlefleets and able to explore space or to go to places were long time travel is needed.

The Phoenix-class Colony Ship is one the largest vessels employed by the United Republic of Cyrannus. The class is primarily built at the Athenan Shipyards in the Twelve Colonies, though they can also be constructed at Cyroenia to great effect. The ship is often used in the colonization of planets as its class name suggests, but it can also be used to great effect as a battleship, a commandship and a supplier of ground forces during wartime. The first of these vessels, the heavily modified Spirit of Freedom is the new flagship of the most famous captain in the URC, Admiral Cretacea.

It can be used to transport thousands of colonists onto a new planet, and is equipped with materials needed to establish a successful colony. The ship is also well able to traverse the entire Gigaquadrant in a short space of time, which helps it colonization efforts. 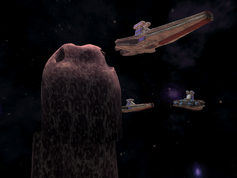 Retrieved from "https://spore.fandom.com/wiki/Fiction:United_Republic_of_Cyrannus/Republic_Navy?oldid=755009"
Community content is available under CC-BY-SA unless otherwise noted.