98 Years
“Honor and prosperity to all of Xiliaan...”

The United Councils of Xiliaan, also known as the Empire of Xiliaan, is the collective territory and governing body of the Xilic race.

At the end of The Seven Year's War, the Xilic government reorganized itself to make interstellar politics easier and more efficient. This included the dividing of Xilic territory into seperate sectors, each with it's own council of leaders. The introduction of a "high council" meant the inclusion of frequent meetings of the sectoral councils to make political and sometimes military decisions. This system, dubbed "Sub-Territorial Democracy", was quickly initiated and installed and was stable within a busy year of it's creation.

The UCX was tested of it's range of expansion when the Council colonized the Andromeda Galaxy. While the governmet was stable in trans-galactic commerce, communication between the colonies and the main Xilic expansion remains sluggish at best. Although the colonies are considered part of the UCX, they act on their own governments in order to circumnavigate slow communication times with the main Xilic ruling body, a flaw in the otherwise firm government organization.

The United Councils of Xilian rely on several regional governments linked into one body as opposed to one large, central leading group. Individual senators are chosen to represent the planet in it's sectoral council, with elections being made by other planetary governors. The sectoral council is then put into contact with the rest of the regions, forming the "Territorial Senate." The high council is made of chosen representatives from each sector who meet on a monthly basis, or on request if the situation is urgent.

The only species currently making up the UCX are the Xilics. While it is possible that a non-Xilic can apply for citizenship in the UCX, it is rare and an exceptionally difficult process. Xilic Biotics are normally considered property of the Xilic military, and are not considered part of the empire's population.

Technology-wise, the UCX is a very highly-advanced species, with advancements specializing in chemistry, fusion power, physics, and bio-engineering. Most Xilic devices are powered by batteries or miniature fusion reactors, allowing a large amount of power from a small device. Their knowledge in genetic engineering is prevalent through the use of living organisms as military vehicles, but genetic modification of Xilics is banned under intercolonial law. The Xilics have also mastered the use of faster-than-light travel, allowing them to cross an entire galaxy in minutes, and travelling between galaxies in a matter of weeks. Their knowledge in chemistry allows them to manipulate chemicals almost at will, allowing the creation of strong alloys and nutrient-rich blood substitutes for use in medical treatment and bio-engineering. Xilics are also skilled doctors, a beneficial side-effect of their extensive knowledge of biology and chemistry which allows them to preform complex surgical procedures, install replacement limbs, and save the lives of those thought to die of serious conditions. As evidinced by The Seven Year's War, the Xilics are well-versed in nanorobotics even using it as a weapon is outlawed on Xiliaan, However, it is still used in the medical field, such as in nanomedicine.

Unlike most other militaries, the Xilics do not widely use themselves as soldiers. Instead, the Xilic armed forces use Biotics for planetside combat. The Biotics are genetically-engineered, lab-grown creatures improved with mechanical parts. These cyborgs have many different variations for different tasks. Contrary to popular belief, the Biotics are actually sentient beings, and each has it's own memories and personality. The Biotics are capable of making friendships, having preferances over certain situations, and even having their own attitude. It is even known that it is common for Biotics to gain mother-child like bonds with their caretakers, and will often be the only Xilic they will interact with if the Biotic is not social. Other "natural" behaviors have been observed with the Biotics such as trophy-taking by snipers, the defence of wounded by infantry, and sightseeing by aerial units.

The Biotics communicate in the "Biotic language", which is similar to binary. Although the Biotics naturally understand the Xilic language, it is impossible for them to replicate due to the lack of mouthparts (though, this is not always the case, since high-ranking Biotic field commanders are usually implanted with a speech synthesizer for easier communication). This leads to knowledge the Biotic language being required for Biotic caretakers and technicians. The Biotic language consists of a series of both guttural vocalizations and electronic beeps arranged in varying pitches and lengths for words, and is used in both communication with each other and Xilics. 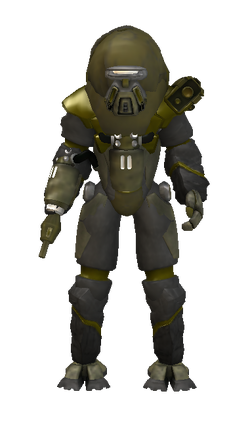 The Infantry Unit is considered the grunt of the Xilic land forces, and are the first in any advance. Encased in a natural exoskeleton plated with blaster-dissipating natural armour, the Infantry Unit is well protected from nearly all common battlefield attacks. The Unit is armed with a heavy blaster in place of the Unit's right hand that is capable of firing anti-personnel rockets, and an optional grenade launcher on the left shoulder. The Units are loyal and nigh fearless in combat, and are willing to fight in any situation with each other. It is common for Units to have brotherly bonds with their squadmates, making them suprisingly gentle and loving when outside of combat. 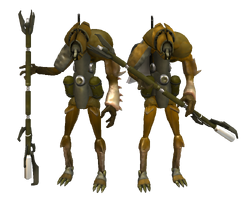 The Sharpshooting units, commonly known as Rirrukil (hunters) to their caretakers, are the silent assassins of the Xilic military. Unlike the mass production of the Infantry Units, the Sharpshooters are grown in pairs in the same growth tank, and are together through all of combat trials. Often considered siblings, these sniper teams are deadly as they are connected. Never will a Sharpshooter accept a mission without it's sibling, and will refuse sleep or nourishment unless it's partner is near. There are even reports that after it's partner had been killed in combat, the surviving Sharpshooter would abandon it's orders and charge into enemy lines, prefering to die than be without it's sibling. The Units are equipped with modified versions of traditional Xilic Shirr, a staff-like blaster rifle deadly accurate to extreme ranges that also doubles as a glaive. These weapons are frequently customized by their owners with paint and engravings marking kills, missions, service life, and other things.

The Xilic Air Support Unit is the primary unit of the air forces of the Xilic militaries. Outfitted with homing missiles and a heavy repeating blaster, along with it's two helicopter-like rotors and advanced targeting, the Air Support unit is one of the deadliest Biotics in the Xilian arsenal. Designed to provide close-support from the sky, the Unit is agile in flight, and can use it's speed and agility to fly fast and dodge enemy fire. 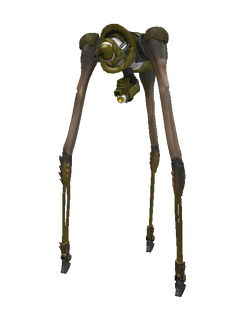 The Xilic Heavy Support Unit is the main unit for providing both long-range artillery support and tank-like firepower for Xilic ground units. With a heavy repeating blaster and a underslung warp cannon, and sharpened legs for impaling enemy trops, the Unit is both agile and well-armed. The Unit is also capable of tunneling through dirt and debris, and is well-suited for both urban and open combat. 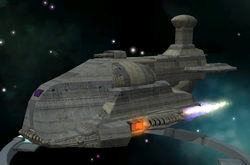 The Ventilator-class Colony Ship is the primary craft for Xilic explorers and settlers. The Ventilator contains accommodation and provisions for an city's worth of Xilics, and features integrated production and processing facilities, allowing the once-landed ships to act as giant factories for providing raw materials to colonists. For defence, the craft supports automated defence turrets for large threats, and carries the gear for 200 fully-equipped Xilic soldiers. Although the craft may not be agile, it's hyperdrive motors make it suited for long-distance travel, and intergalactic trade.

The Cannula-class transport ship is primarily designed as an armored delivery vehicle for both Xilic and Biotic troops. It's armament included a pair of nose-mounted repeating blasters and a heavier, moveable gun turret in between the fized repeating blasters. While it's troop capacity is rather small, the design more than makes up for the fact by featuring heavy armour and powerful engines, giving speed and survivability on the battlefield.

The Bonesaw-class Heavy Cruiser is the workhorse of the Xilic navy, and is perhaps the most intimidating in the arsenal. Outfitted with heavy turbolasers and hangars to support fighters, the Bonesaw is the first line in any Xilic armada. Even it's very design is a weapon, and it is not unheard of for brave Xilic ship captains to use it's superior frontal armour and blade-like shape to ram enemy ships at close range or as a last resort. 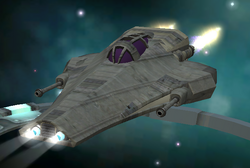 The Scalpel-class Interceptor's very name implies it's nature; a craft for administering quick and precise strikes against enemy ships. Fast and agile, the craft is armed with an array of guided missiles and repeating blasters. Although it's range is short, the Scalpel is light and quick, allowing it to chase down and destroy even the fastest of enemy fighters.

The Retractor-class Frigate is the perfect middleground between the Bonesaw-class Cruiser and the Scalpel-class Interceptor. Although it may not be as agile or fast as the interceptor, or armed and armoured as the cruiser, it is still capable of holding it's own in a fight. Designed for protecting cargo ships and larger, slower cruisers, the Retractor is often used in support for Bonesaw-class ships by acting as anti-fighter defence. Despite it's seeming redundancy, the ship is cost-efficient and is one of the most common ships in the Xilic navy. 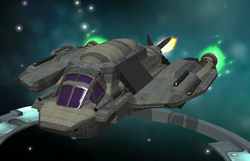 The Rongeur-class Strike bomber is the Xilic's awnser to small, but hardened targets. The Rongeur-class is capable of putting a variety of ordinance onto target very accurately. It's armament include a pair of heavy repeating blaster cannons, and wing-mounted proton bomb launchers. An unusual feature of the Rongeur-class is it's toggleable dive siren. When turned towards the wind, the siren produces a blood-curdling wail meant to scare and disorient inexperienced enemy troops. Although it may be awkward to deploy and use tactically, the bomber is the Xilic's main tool for both ground and naval attacks.

“Let us make our existance known, together.”

“We are honored to have you as a friend.”

“You will meet a dishonorable death!”