"I will be Ugandalore! For every indignity you have caused, that will be my source of revenge!"

Overmaster the first, The Bloodletter

Leader of the Dead Watch

“I Am the true Ugandalore. My men will destroy and burn all before me, and I will rule all the stars in the universe!”

Tox Cano was a Ugandalorian Warlord, leader of Clan Cano, founder of the Dead Watch, and a violent rebel of the Empire, whose actions would plague it for years. Even after his death and the spliting of his people, Tox has remained a dark note in the history of the Mendel people, for his various terrorist actions and need to conquer. His leadership of Dead Watch is a legacy of burned down settlements, Clans torn apart by in-fighting, and violated corpses.

Tox was not always the dark chapter of his people and society. At one point, he was a beloved Clan Lord, with aspirations for leadership and glory for his people. A best friend of Torscka Nitrocon, the High King was not aware of the depths of how insane his friend Tox was, until, jealousy finally nawed away at any sanity Tox had left, and caused him to plunge his people into a violent civil war, that had no end until his death at the hands of Terikalinra.

Tox Cano was a descendant of the decadent and ancient Cano Clan, his people long ago almost wiped out by the deceitful Clan Clett and the ever-powerful rivals of Clan Nitrocon. For ages, they had spent their time in the shadows, rebuilding their numbers, taking babies from other Clans, and cloning their number to make themselves a force once more, while re-awakening old familial bonds between other Clans, such as Clan Verbi and Clan Gredyc. Tox inherited the Clan from his uncle, and began his efforts to gain more power among the Ugandalorian Clans. To do so, he befriended Torscka Nitrocon, the young leader of Clan Nitrocon, now currently, one of the most powerful Clans in Ugandalore space.

Although at first having a bit of a rivalry, Tox and Torscka soon learned to respect and admire one another, many growing to respect Tox's intelligence and charisma, and his personal strength. But as he worked his way up the Clan Hierarchy, Tox had his eyes on the position of High King. To him, nothing would be enough until he and his followers ruled, and decided, the fate of the Mendel people. However, he was shocked and angered to find that it was Torscka, not himself, who was elected by the Clans to lead the Ugandalorian people as High King. Tox angrily demanded a vote be retaken, but The Clan Lords told him that he was a powerful force in his own right, what more could he need?

Tox, however, would not be swayed. Rallying his own Clans and followers, Tox ordered Torscka to stand down and give him the crown of High king. Torscka, angered by his friends' betrayal, refused, and demanded that Tox calm down and speak things over, before he plunged his people into a violent civil war. But the Dead Watch leaders' arrogance blinded him to the truth of the matter, and he refused, a massive battle breaking out. Although the Dead Watch took heavy causalities, Torscka was briefly driven from the homeworld, and onto the moon of Ugandalore, where he would settle his forces in and wait for the Overmaster to arrive.

Tox and his forces did indeed land, and, with the help of Barda Clett, Torscka organized an ambush that saw much of Cano's forces butchered in the attack. However, Tox showed the true depths of his insanity, butchering villages and towns that showed support for the True Ugandalorians, the followers of Torscka's ideals that felt the Ugandalorians' warrior ways where better focused elsewhere, and not on quest as Tox had spoken of so often. With Tox defeated, the true High King took back his throne, and drove Tox and his followers out, though they where never quite defeated.

The Dead Watch would organized raids on the Waptoria Alliance and the Volver Empire, searching for war material and weapons to use in their war. Constantly, Barda Clett and a group of his fines Super-Commandos gave chase, but Tox and his minions always managed to escape. It was during this time, they came into contact with the Unitech Citadel of Sentients, a Waptoria splinter group much like themselves, and formed a powerful alliance.

Tox fought alongside Lord Ne'yon for the Neblorians, in an attempt to defeat Ugandalore the Great. Both he and his servant Lorka Gredyc, and his allies, including Solid, fought hard against the enemies, including the Ugandalorians, the Volver, and Waptoria. He also managed to kill Oskel in battle, though his death was not permeate.

However, On the final battle, his body was possessed by the Dark One, and his soul thrown out of his body. It's believed he died soon after.

Tox is violent and aggresive, but not above working with "peasant-Rulers" of other empires to agieve his goals. he hates Ugandalore the Great and Barda Clett and wants nothign more then to burn them in front of his enemies to bring them inline.

Tox is known to get extremely violnet when Ugandalore the Great or Torscka Clan is mentioned, and will try to stragle any who talk about him.

He is also very argogantic and amoral. Not above killing innocents to reach his goals. 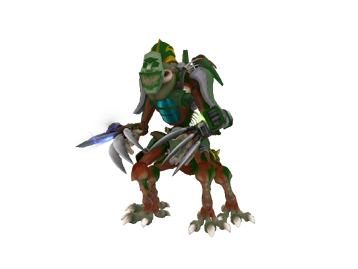 Trained in the Cano clan's forbiden martial arts, Tox in hand-to-hand combat knows how to "Split a man's thraot openw ith his hands", and demonstrated this ability on a failing lacky.

He is an expert with swords and blades, as well as various guns. His favrite gun is the SNorgon Scatter Shotgun, able to fire semi-explosive rounds that send targets flying away.

His abilites in diplomacy, while modest, are worth noteing. Tox is an exceltent speaker, and very good at bribing enemies. He also is good at itimadating at others.

thanks to the corruption virus released by Dormuncka, has the same ravagened features most Ugandals have, inculding Sickening eyes, skeletal limbs and hands, and larger muscle mass.

I work with you only in passing.

Your exsistence is a blight upon my eyes

Quotes from others Edit

“We could've been allies,friends in battle, brothers even. Yet you let the sins of our ansectors cloud your vision. God-bye Tox Cano, For you have sealed your fate.”

“But you can't say anything about Forbila because,well, this is a wiki, Don't want the kiddies picking up language from you. Of course i have seen plenty of fiction with lots of cussing and stuff. Man Am i tlaking or what?!”

“Your goals are foolish. You will one day come across an empire you can't handle.”

- King Glynn of the Volver Empire

“Though our ideals may differ, you will prove to be an excellent ally”

Retrieved from "https://spore.fandom.com/wiki/Fiction:Tox_Cano?oldid=729680"
Community content is available under CC-BY-SA unless otherwise noted.