“Forget the Theriocephali. Even in the noblest elf aristocrat or the most devout human knight, there is the same seed of wildness in their souls as the lowliest of beasts. It is just suppressed, concealed, kept hidden under the veil of culture and sophistication. But one can always break it. One just needs to make a little... push. A single bite, a kiss of the Goddess... and the man is gone. The beast inside awakens, and woe betide all who stand in its way.”

Therianthropy, most commonly known as Werebeast Disease is a magical curse which has been spread through the ages in Koldenwelt. It is characterized by the often involuntary transformation of the victim into a monstrous animal hybrid every full moon. Werewolves are the most known werebeasts, but many other kinds of cursed creatures are known to prowl the night, with some scholars assuming any animal could potentially manifest as a werebeast, leading to unpredictable, and often very grotesque, combinations.

Unlike vampirism, therianthropy has no determinate, recorded origin. It is a much older curse than that of vampires, assumed to have existed since the age of the first immortals. Some scholars claim the curse was created by Isiris Herself, who gave birth to werecreatures to serve as protectors of the world until they were lost in their bloodlust, abandoning their original purpose. Others claim the Simulacrum of Chaos Kalisearan is the creator of therianthropes, having bred them into existence in the distant past for no specific purpose. Some scholars, however, have attributed Harstag to werebeasts, claiming the Simulacrum of Hunt created them to be both hunters and hunted for himself.

Regardless of their origins, werebeasts have caused great destruction for hundreds of thousands of years, leading the civilizations of the world to hate and hunt them at every opportunity. The Duskwoods, a land whose very soil is cursed, is known to spontaneously create different kinds of werebeasts than those commonly seen across the world, with those who escape them coming to inevitably spread their curse at every chance they get.

Therianthropy is a curse of dark magical nature which is transmitted from already-existing werebeasts to other creatures through exchange of bodily fluids; a werewolf can infect another creature by biting them hard enough to draw blood, or a person may be infected by deliberately drinking the blood of a werewolf. Werebeasts capable of launching globs of fluid, such as poison, are especially dangerous due to this.

Most races can be afflicted with therianthropy, including deiwes, beastmen and lesser dragons. Races known to be immune to theriantopy include those devoid of blood, such as Elementals and Golems, and those not native to Koldenwelt - there are no known causes of Outsider werebeasts. Animals cannot become werebeasts, as the curse only seems to affect sapient beings, though they tend to see werebeasts of their species as one of their own, i.e. a pack of wolves would see a werewolf as just another wolf. Due to their great size and power which allow them to fend off werebeasts, there are little to no reports of Greater and True Dragons afflicted with therianthropy.

The effects of therianthropy are very obvious; whenever Kaurlus or Mehnot go full, the victim is forcefully transformed into a feral animal hybrid, crazed for blood and violence who loses control over their actions until the next sunrise, where they return to normal. The transformation is often very painful as it tends to restructure the bones of the victim, with special mention given to Theriocephali victims - cases of, for example, reptilian beastmen being transformed into mammalian hybrids, tend to be especially grotesque to behold, and these werebeasts tend to be far more violent than deiwes as a result. Werebeasts of different species cannot breed, but two humans afflicted with the same curse could give birth to a cursed baby. Therianthropy and vampirism are not mutually exclusive curses and their hosts can infect one another, creating a vampiric monster known as a werepyre.

Being afflicted with therianthropy comes with an array of advantages. Firstly, the physical prowess of a werebeast is amplified to extreme levels upon transformation, their perception and agility are enhanced, and they gain incredible regenerative powers; stronger werebeasts can shrug off the blows of certain weapons, and the wounds they do suffer tend to be healed in a matter of seconds. Werebeasts can regrow lost limbs minutes after they are lost, and their regenerative abilities are visible (albeit reduced) even when not transformed. A therianthrope also gains access to any abilities of their animal form, if any - most bird werebeasts gain wings which grant them flight, amphibian werebeasts gain the ability of breathing underwater, etc. Therianthropy also enhances one's lifespan considerably - though it does not grant biological immortality - and the oldest werebeasts are widely known to be the most powerful, some of them gaining the ability to become fully conscious in their beast form and achieving the power of changing into animal shape at will.

However, werebeasts also possess numerous weaknesses. Most of them lose their ability to think upon transformation, becoming little more than rabid animals. While incredibly tough, they are universally weak to silver and anti-magical metals such as cold iron - being struck by weapons plated in silver causes great pain in werebeasts and also disables their regeneration, making them susceptible to agony and the loss of limbs. Werebeasts are also universally vulnerable to light magic, which burns through their bodies while ignoring their enhanced toughness. Most therianthropes dread the nights when Kaurlus or Mehnot go full at the same time, for when this happens, werebeasts truly lose all rational thought and become little more than insane wrecks, attacking everything and everyone around them until they pass out of over-exertion. A werebeast who is subject to extreme amounts of stress while transformed may lose their sapience and become stuck in their hybrid form for the rest of their lives, a fate typically considered worse than death by most experienced therianthropes. 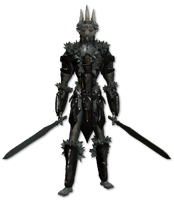