The Progeny are the various species and factions whose existence and advancement are linked to the direct or indirect influence of the Psal'Jinnai Symmetry. While no formal political bonds exist between the Progeny as a whole, particularly those with hostile relations or isolated territories, the growing realization of their connection has led to an informal "progeny movement" advocating for the creation of such formal bonds. This has notably resulted in the altruistic intervention of the Eovinjai Sovereignty in the Teyan Subjugation War.

The Tvolii are the oldest of the Progeny races, having developed their early civilization under the guidance of the Psal'Jinnai. Originally intended as an elite class of Essence-wielders within the Symmetry, as well as hosts for the next wave of Pheoxchiala minds, they unknowingly adopted the role of a successor species following the fall of the Symmetry. The Lieschi, Tyle'ans, and Nech are also regarded alongside the Tvolii as the "High Progeny" for the direct impact of the Psal'Jinnai on their evolution, and are generally the most powerful races within the Phero Ecumene. The Okra and Oslun are also included within the Progeny due to their indirectly Psal'Jinnai-aided advancement.

Progeny society and culture tends to be more meritocratic than most, with a "rule of five" often being seen in ruling bodies, a trait inherited from the Symmetry's ruling pentarchy, which now controls the Phero Ecumene.

An angular triskele or some variation of it is generally used to represent the Progeny, as well as the theoretical union or common allegiance of thereof.

The Progeny is vast, and incorporates a large number of different species from across the First Gigaquadrant into its ranks. From Andromeda, Tuuros, the Milky Way, and beyond, the species who claim Progenic heritage are found in many places. 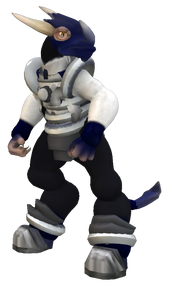 Ankoran
The Ankoran are a Progenic species of homosaur reptiles originating from the planet Usse, in the Milky Way Galaxy. Although largely united as a species, with a single empire spread across the Milky Way, and Andromeda galaxies, several factions of Ankoran exist.
Belphrim.png
Belphrim
TBA
Ceone.png
Ceone
TBA

Eovinjai
The Eovinjai are a proud, logical, amphibious race hailing from the tropical world Eovinj, accustomed to humid coastal rain forests and wetlands. Of the numerous biological species uplifted to sapience by the Psal'Jinnai, they were the first to independently develop spaceflight, at least of those which presently exist. They are a distinctly rational and organization-prone race, strongly valuing routine, efficiency, and trust in intellect. Eovinjai are also known to deeply venerate genius and similar instances of rare but extreme benefit, and can be easily annoyed or saddened by any squashing of perceived potential. 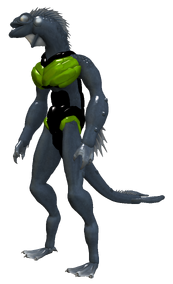 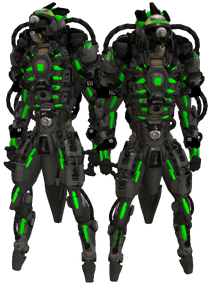 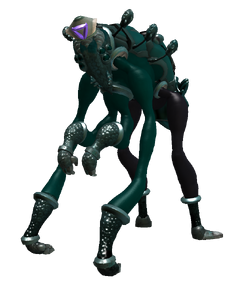 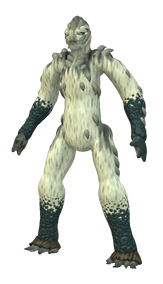 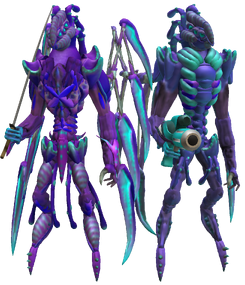 Tei'aine
The dominant race of the Hegemony of Astrath, the Tei’aine (Astrath Primic: Indigo Progeny) are a race of rather alien angelomorph. The Tei’aine are, in essence, shells - the true Tei’aine lies in a swirling, sapient collection of Essence sealed away by a “skin” substance combining the qualities of flesh, bone, and rock that keeps the Essence inside the Tei’aine protected and functioning. The Tei’aine resemble avians - and the closest equivalent to the type of life they are on their homeworld are indeed almost avian, with “wings” of bone and blade-like appendages and being capable of limited flight and levitation on their homeworld. The Tei’aine are notably Essence-attuned - powers over Psionic and Elemental come almost second nature to the Tei’aine. The Tei’aine are, surprisingly, immune to anti-essence powers - while their powers over Essence will obviously be disrupted, their Essence cores will remain perfectly intact. 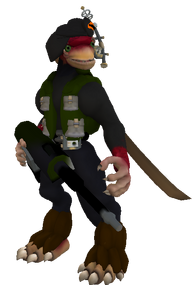 Teyan
The Teyan are a Progenic reptilian species of red-scaled humanoids originating from beyond the First Gigaquadrant. Their home galaxy was supposedly destroyed during the Annihilation, causing the species to migrate, splitting into two warring factions of grotesquely different sizes. Potentially one of the youngest races in the Gigaquadrant, their primary source of infamy is the Teyan Blitz, in which The Grand Teyan Empire destroyed the Mithadorn Republic, and scatted their rival Teyan faction, the Teyan Imperium of Andromeda, in less than a single galactic-standard year.

Tvolii
The Tvolii (singular Tvolis) are a race of gas dwarf-native invertebrates that make up the hegemonic ruling class of the Phero Ecumene. Having evolved through a combination of natural selection and Psal'Jinnai interference, the Tvolii built a large Conglomerate centered around their homeworld of Tvolai, which lasted for centuries before being taken over by the Tvolai Convergence. They would become instrumental in the founding of the Ecumene in the late 1700s CE, and their population has rebounded significantly following their near-extinction at the hands of the Oracular Mind. 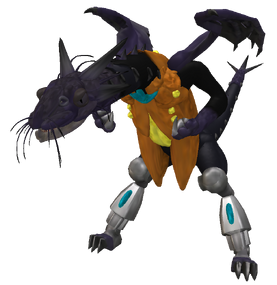 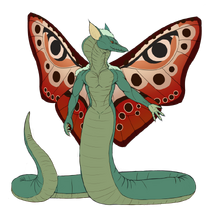 Vanara
The Vanara are race created by the ancient Precursors known as the Multus Esse, specifically by the Persacron, to battle the Eitren as psychic support troops, and latter repurposed to study, understand, utilize, or even fight the supernatural (if it proved necessary). While weak in body the Vanara are strong in mind with strong learning abilities and unyielding tenacity, coupled with innate psychic abilities and a natural affinity for the chromatic magics of Accel Space. While often times stereotyped as sadistic, something not entirely unwarranted, the Vanara are a hardy race known for their determination, loyalty, and spirit that has lend them through the darkest of hours time and time again. 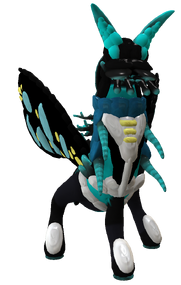 Retrieved from "https://spore.fandom.com/wiki/Fiction:The_Progeny?oldid=823387"
Community content is available under CC-BY-SA unless otherwise noted.