The Junction uses a a large variety of different synthetic species in their army. Some of these, however, are almost universally used in all in and out-world missions of the empire. 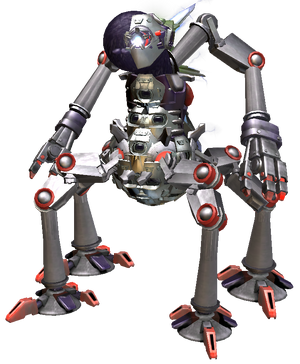 The Labour Drone is the backbone and the "citizens" of the Junction, composing almost 50% of it. Their job is to maintain conquered planets, supressing the native life in the progress.

Labour Drones by themselves are very weak, but on large numbers, they are very large to beat. They are experts on building weapons from scrap metal and using their dark energy as power sources. 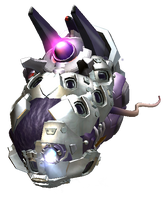 The Bioscanner is a small camera-like floating synth used by the Junction to spy on enemy territories, and also to scan areas in search for escaping prisioners. Bioscanners are also used to oversee enslaved cities or tribes, to make sure no one tries to rebel against the Junction.

Bioscanners are very fragile and weak, their only mean of defense being a blaster gun. After being damaged, they may attempt to crash into their enemies, taking them out with them. Bioscanners are usually seen before a large Junction army attacks a city. 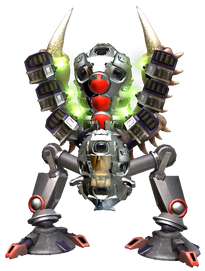 The Bioturret is a sentry gun used by the Junction as area denial. They have a very fast rate of fire, as well as high resistance to damage and highly damaging energy bullets. However, they are totally immobile, and must be manually moved around by other synths.

Bioturrets are commonly used in Junction buildings, colonies and planet fortresses. They can also sometimes be moved on Gatlig Crabs's backs, giving extra power against enemies and firing on directions other than just straight lines. 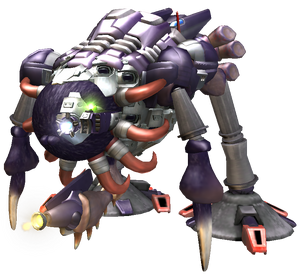 The Gatling Tank is a large, bulky synth used as a tank-like foot soldier. Its most notable feature is a third arm coming from its chest, holding a gatling gun-like weapon that can fire energy slugs at incredible speeds. Gatling Tanks are very resistant, and can also charge at enemies, easily destroying machines or buildings with their sheer brute strength.

Gatling Tanks, while large and bulky, are usually slow and have a hard time aiming at their enemies, being more efficient while shooting at straight lines. However, these monster should not be undestimated, as one of them alone can easily burn an entire city to the ground. 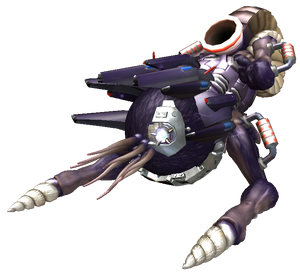 The Aerial Devastator is a floating synth used to attack targets from the sky. It's usually used along with the Gatling Tank in battles, where they support their land cousins by destroying those who may try to attack them. Aerial Devastators have 4 cannons in their limbs, used together to fire a large explosive mortar.

Unlike the Gatling Tank, the Aerial Devastator is a lot more fragile. However, it has much more accuracy, and can also travel between places faster. Aerial Devastators are also much smaller, being harder to hit. 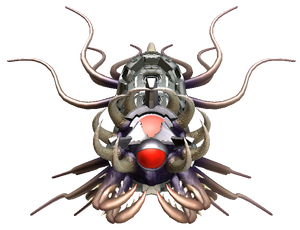 The Nanotick is a nanosynth used by the Junction to weaken the defenses of their enemies by deploying them as infestation pods. The Paraticks can enter a creature's nervous system and make it slowly paralyzed, leaving the Junction's other synths free to kill the victim the way they like.

While the Nanoticks can easily surrender a city in a matter of minutes, they are very vulnerable to cold temperatures. Nanoticks are heavily slowed by cold or icy weather, making regions such as the planet's poles safer against them. 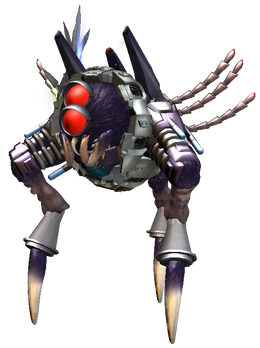 The Chaser Striker is a dangerous foot soldier with the main objective of escorting and scouting. They are fast, agile, bulky and have high firepower. Chaser Striker are also used to protect their giant cousins, the Dominator Strikers. They attack by firing fast energy-filled flechettes from their eyes, which are capable of vaporizing biological matter in a large radius of the flechette's explosion.

Chaser Striker are very resistant to projectile damage, but have been seen being more vulnerable to blunt trauma. However, meleeing a Chaser Striker shouldn't ever be counted as a valid tactic, because this powerful tripod is more than capable of melee combat itself, piercing its sharp legs through attackers.

The Junction Overseer, codeveloped by the Junction and the Drakodominatus Tyranny immediately before the Borealis Campaign of the Great Tyranny War was a monstrosity that combined the very best of Junction synth technology and Dominatus bioengineering. The result was a monstrous supersoldier that could more often than not defeat a Tyranny Overseer in single combat. Frighteningly fast, agile, strong and resilient, they were often spotted at the front lines of Junction assaults, where their intrinsic power as well as their extremely advanced energy weaponry played key roles in breaking through the Tyranny's positions.

While they are resistant to all forms of conventional damage and highly resistant to infantry-scale weaponry, they could be damaged and killed by sufficiently advanced small arms such as those wielded by the Tyranny's Synthetics and Overseers, and could be dealt with effectively by vehicle grade weapons. This was somewhat rectified when the Junction upgraded them with short-range teleporters so that they could close the distance faster and thus negate the power of the Tyranny's long-range weapons. Aside from this, their only weakness was their relative rarity, as even with the industrial capacity of the Junction, the costs involved with the Junction Overseer meant that they could only serve as an elite fraction of the Junction's forces, much as they did within the Tyranny's.

The Dominator Striker is one of the largest and most powerful synths of the Junction. This building-tall tripod attacks by firing head-monted pulse guns at infantry, but they are mostly feared for their warp cannons, incredibly powerful weapons capable of tearing down even the most armored vehicles and veporizing them into nothing in the process.

Dominator Strikers have very few weaknesses. Despite their big sizes, their legs are very flexible, allowing them to crouch and sometimes even crawl to their objectives. Dominator Strikers are nearly always escorted by Chaser Strikers and are usually sent to attack in packs of at least 12 at a time. 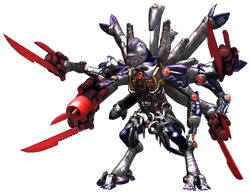 Mind-Kings are commander units sent to lead Junction forces into planets. Mind-Kings are hivemind "beacons", allowing them to coordinate attacks and strategies in a way that regular synths are not capable of doing without the aid of a Junction Mind.

Mind-Kings are tremendously strong creatures, rivalling the physical prowness of War of Ages-era Xhodocto in both offense and defense. They are equipped with Dominator Stiker pulse cannons, have missiles launchers on their backs and are capable of using psychic powers in a similar way to Junction Minds, but less powerful. The oldest and most powerful Mind-King is Silver Death. 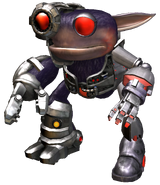