The Junction, conquerers of dimensions

Beyond the Onuris Universe

“They come, and they cannot be stopped. It eats through your mind...crawls through your skin...you can feel them. And they turn you into these...monsters...and used them to fight your own kind. This is not evolution. This is murder!”

The Universal Junction of Species, otherwise known simply as the Junction, is an immense and powerful interdimensional empire, composed of a massive variety of both allied and enslaved species, in an eternal mission of gathering all kinds of technology and resources for themselves, not caring for whatever happens to their original owners.

The Junction is an ancient empire, billions of years old, expanding through several different dimensions. They are commanded by a race of artificially-evolved slug-like creatures known as the "Junction Mind". The Junction is almost entirely of cyborg creatures, known as "Synths". They are experts in interdimentional teleportation, and most of their technologies are powered by dark energy.

The Junction is known to attack civilizated worlds, brutally turning all of their original inhabitants into synths and sucking all the resources of the planet, turning them into poisonous deserts after several years have passed. Because of this, they are often seen as an evil and malevolent force of dictators.

The Junction only had brief interactions with the First Gigaquadrant, and much of their history is unknown, however, the Junction and the Delpha Coalition of Planets have been in some communication for some time.

They came from a disintegrating universe they refer to as Dimension Zero, one far older than the prime universe. Stars had long ceased to form, and the last few were mere moats of decaying iron floating in a sea of near-nothingness. Black holes had long evaporated and even the proton had decayed. The last few races sought any few traces of heat they could find, changing their bodies into the perfect heat absorbers, being near-perfect spheres and having their physiology adapted to conserving energy. But even time had almost ceased in the tired universe, with so much little energy to extract it took long timescales to even think a single word. As the last dead iron stars turned to seas of subatomic particles sucked into the void, the last few races were about to succumb to the death of heat, until they chanced upon a jitter in the darkness. Like moths to streetlight, the last lifeforms in the universe - as they were turning to dust themselves, reached an object of immense age.

It was a cosmic string, one stretched and coiled into a higher dimension. As they watched their very atomic structures crumple like dry paper, they were forced to "climb" the cosmic rope, up, up into a higher dimension, beyond even the multiverse. They had entered another space, a shadow brane which runs parallel to the rest of the multiverse, its influence causing expansion in the universes of the multiverse to speed up, known as dark energy. The brane was timeless, and contained energy that had very little interaction with them (the shadowverse was as much a void as their previous home). The races could only percieve the cosmic string, which they called "Junction". They found the cosmic rope descended into other universes as well, some were too incompatable, but one, was just like their's, but still young and warm.

The Junction as they now called themselves, observed the universe. For the first time they saw stars that glowed, with a connection to dark energy they had a lot of power in their hands. But they were not alone, something The Junction were not used to. They realized they were in competition for resources just like how ones of their own kind would once fight to the death over the slightest scrap of heat. They realized they needed to assimilate new technologies and adapt them with dark energy. They met a few civilizations of interest, The Catharsis, another discoverer of dark energy, the Grox who are considered their competition, the DCP who have become aqainted with. But as they stretched into the universe, the inhabitants stretched into their's, one of them, an AI from the Technoosphere, Exodium, seaks to control the expansion of the universe to create pure order, and if thats means taking the shadowverse as its then Exodium shall try...

Before the War of Hyperspace, The Junction was contacted by a mysterious entity which named itself Exodium, who unknown to the Gigaquadrant was a Precursor AI that planned to destabalise all forces that could oppose its projects. The DCP had recently discovered hyperspace stars, the largest known collections of hypermatter and the Entity made a lucatritive deal with The Junction that it would help them secure stars of their own. Exodium was also manipulating a commander of operations of the Delpha Coalition of Planets, making the DCP go to war with The Junction. The first strike was a succsess, using warp bubbles to destroy The Junction's newly built infrastructure in hyperspace. The Junction quickly rebuilt however and recieved word of the DCP's aggression by Exodium.

When the DCP struck again, The Junction used a subspace weapon to bring them into realspace, where they found themselves surrounded by a cluster of what looked like black holes (but were really dark energy stars where The Junction lived in). Surrounded, the DCP fleet was destroyed quickly by the spacetime weapons of The Junction.

The Junction then proceeded to attack the DCP's main center of command in Hyperspace, and forced the DCP to retreat, however, the Coalition still had the upper hand with hyperspace-star launching capability, and planned to target the Borealis galaxy, which was leading up to a final desperate conflict.

The final battle never occured, as Exodium's true-light had been revealed. Instead the DCP and Junction allied again to fight the greater foe, along with the Dominatus Tyranny, Andromedan Galactic Commonwealth, rest of the Polar Crystal Alliance and several empires like the Drodo which were caught up in the war. In a bold statement, they challenged Exodium together, but the fleet was annihilated by a Nicoll-Dyson beam. Luckily some of the allies, including the Junction have survived and were taken close to Exodium's mainframe hub in hyperspace, giving the allies chance to upload a mysterious package of information given by another AI friendly to the allies. It contained the knowledge Exodium needed and he was no longer a threat.

The Junction would later confront the Drakodominatus Tyranny during Attero Dominatus' Borealis Campaign, where the AI Alfabusium grew an interest in the Dominatus race and decided to assimilate them. Fooling the Tyranny to believe they were in friendly terms, Alfabusium quickly backstabbed the Dominatus and launched a gigantic crusade on their Borealis territories, which resulted in the destruction of the Tyranny's territories in Borealis and all surviving Dominatus being assimilated by the Junction. The Junction would later be present during the Mirus Campaign and most importantly the Battle of Demogorgon Prime, where Alfabusium viciously destroyed and assimilated all Dominatus in his path until there were none left for him to take.

Following the end of the War of the Ancient Three, investigations done by the Polar Crystal Alliance on the Junction's former claimed territory revealed they had disappeared - it is widely believed the Junction departed from the Onuris Universe to another one, perhaps one which would present less resistance in their attempts to conquer it.

The Junction does not possess a society. Junction Minds are completely devoted to their goal of become more advanced and as such, do nothing else but plan new technologies or plan the conquering of other nations. Synthetic slaves have absolutely no say on the hivemind and have no choice but obey, their original selves being long gone and incapable of fighting back.

Dark energy forms the basis behind the Junction's technological trump card, and is used by the Junction as their main power source. Dark energy is though to exist on shadow braneworlds (a higher dimensional membrane the multiverse is attached to) anchored to our braneworld, meaning it has a very powerful force universally. Due to this, the Junction's control over dark energy could allow them to literally reshape the entire universe if they wanted to. However, they don't have any reason to do that, as there wouldn't be any benefit from it, and it is unknown how much control over dark energy they really have.

Dark energy stars, are astrophysical objects that are externally almost indistinguishable from black holes, but internally, they are an entirely different animal. They have an event horizon which is similar in some ways to a superfuid, infalling matter becomes part of the superfluid. However, as material passes through, the proton is forced to decay quickly, creating an incoming flurry of radiation. Virtual energy is also forming at a faster rate poppong in and out of the void. Spacetime, unlike a singularity is being pushed out by negative pressure, so its is reasonably calm inside.

The Junction have made use of dark energy stars. Living within the bubbles, they have access to a rain if infalling energy, and as the bubbles expand they join, making a "habitat" or colonies for the Junction races. Outside each star, orbit vast cities of assimilated technology and huge fleets.

The Junction are capable of creating rapid localised expansions in space and time itself, both for creative and destructive purposes. Creatively, they can use void bubbles for an advanced form of warp travel, but destructively they can cause space to rapidally expand and contract back again, causing chemical structures to be severely altered. Such void bubbles can be on the microscopic scale (used as a form of nanotechnology), or can be the size of an average sapient to over the size of a star. In combat, void bubbles could be used on lifesize structures too, as well as destroying enemy fleets or colonies.

Probably the technology the Junction values the most is their interdimentional teleportation. By using colossal dark energy reactors, the Junction is capable of creating safe portals to other dimensions which may remain open for hours or even days. 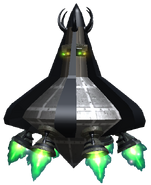 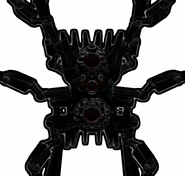 Alfabusium
Master AI of the Junction

“Continuation of your existence is preferable at this time.”

“It is said that this mysterious yet powerful civilization uses dark energy, which makes up most of the universe. It is something our's and nearly everyone else still searches for. If so, they will have very few if any competition, and might be one of the strongest civilizations known. However, since they use the universes "dark stuff", they themselves will be almost invisible to us.”

“Rather powerful for 3 Dimensional beings... I hope to play a role in this races' future.”

“I respect them as much as I am completely terrified of them.”

“A great alliance equal to our own. This alliance deserves to stand by us for eternity.”

“I don't know what to say. Our war with the Vissadar is hard enough, but fighting a multidimensional empire of synthetics? I give credit to the races in the past and present who put up some kind of resistance to these monsters.”

“To fight the Junction is to fight not a civilization but a force of nature. It is to fight a wave or purple as a solitary rock. Though the rock can push the waves back, the waves always come again, and in due time the rock is eroded away. To fight against them is to stare into the abyss of time and think that a force as primordial as them can be stopped and then to have that hubris and pride chipped away as the stones on a white cliff near the sea. I learnt this lesson late, and now I am one with the ocean.”

Retrieved from "https://spore.fandom.com/wiki/Fiction:The_Junction?oldid=751550"
Community content is available under CC-BY-SA unless otherwise noted.