All over Andromeda Galaxy

The Artifacts shall be protected.

The Divinarium
Draconis Empire
Brood of War
Legion of Badmanz

Andromeda War
“We are the Inheritance. The Artifacts shall be protected. You shall be destroyed.”

The Inheritance is the system of robots and artificial intelligences in the Andromeda Galaxy which has been seen protecting the Artifacts during the Andromeda War.

Little is known of what is the Inheritance and where they came from. It is believed that they are the creations of the ancient, forgotten civilisation - perhaps the same one that created the Artifacts. Carbon dating of the destroyed Inheritance robots has revealed that they are, in fact, millions of years old.

Most likely, the Inheritants are the "guardians" of the Artifacts, created to protect the legacy of the ancients from the young races.

The Inheritance has been awakened during the Andromeda War by the Legion of Badmanz first, who have been searching for the artifacts on the planet in the Twilight Sector. Afterwards, the Inheritance military force has appeared on the planet and immediately destroyed most of the Badmanz' forces, forcing them to retreat.

Afterwards, several other Inheritance nodes have been found by other civilisations. They are generally aggressive and tend to be dangerous.

The Guardbots are the most common type of Inheritants encountered; they are large, Draconis-sized (some, however, appeared to be Loron-sized) androids made of unknown nano-alloy and armed with what appears to be gravitation weapons, being able to literally rip the enemies apart. 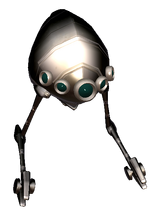 Servibots are smaller type of Inheritants, being as large as a small Radeon. They are often seen accompanying Guardbots and supporting them in fight using their laser weaponry. 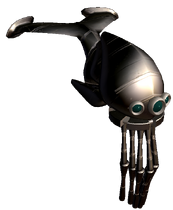 Laborbots are the largest type of Inheritants yet encountered (save for spaceships), at the size of a Koda. They are generally supporting other robots in battle, transporting them and fixing them if they are damaged. If threatened, however, Laborbots can fight using the graviton cannons attached to them and their tentacle arms. 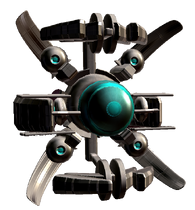 Engines of the Gods are large, vehicular Inheritants which can travel in space and carry other Inheritants with them. They are armed with graviton weapons and differ in sizes - some Engines are small while others are as large as small moons. 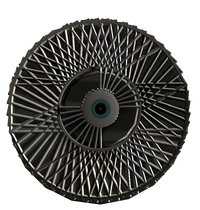 The Infobots are the hypotethical sentient type of Inheritants who command their armies and rule the Inheritance. So far, there is no proof of them existing.

Robots of the Inheritance (also known as Inheritants) are different in form and physiology, as seen above. However, they share some 'physiological' traits. They are all made of the unique nano-alloy, similar to the nanometal used by the Divinarium but far more advanced. Due to this nano-alloy, the Inheritance's robots have immense endurance and can survive even the open fire of the Zazane shidium weapons.

Little is known of the Inheritance's behaviour outside of combat. They seem to be centered on protecting the Artifacts, but nothing else is known.

The Inheritance apparently has extremely advanced technology, including spacetime engineering, gravity manipulation and dyson spheres. It is also rumored that they can control time using Gyronic technology, but that is nothing but a rumor.

The Inheritance is the civilisation of machines, and thus they have no true "society". While they have some hierarchy, it is unknown if the Inheritance robots are even sentient.

The Inheritance is found on the worlds close to the locations of the Artifacts, and remain unseen until the artifacts are threatened. It is presumed that their cities and buildings are usually located underground.

All Inheritants are robots and so they are all techically "vehicles". Only Laborbots and Engines of the Gods are, however, treated as such.

Being robots, Inheritants have no need for devices - whatever is needed is wired into them directly.

The Inheritance has several types of weapons used by them. The primary weapons are graviton cannons, large blasters which warp gravity and can either turn the organic lifeform into the bloody mess, tear their skin and flesh or send them in the air. They also double as engineering tools.

In addition to graviton cannons, the Inheritance also uses lasers and plasma weaponry, although it is rarer.

So far, only one major Inheritant is known. 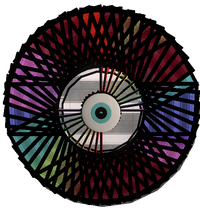 Infobot Imperious is the mysterious leader of the Inheritance who is believed to know the truth about the Artifacts.

“A force of pure horror and destruction. If only they could be convinced to help us...”

“The Brood of War shall not negotiate with machines!”

- Tyraz of the Brood of War