The Fleet of Retribution, or the Allied Armada, is a major space fleet of the Allies navy during the days of the Trucinex War, the Second Galactic War, the Intergalactic War and the Great Cyrannus War.

This armada was formed immediately after the Trucinex attack on the Twelve Colonies. It is under the command of Admiral Cretacea and Vice Admiral Rambas II. The elite captains of the Fleet won many victories for the nations of the allies against the Trucinex, Imperial Alliance, the Cognatus and the Confederacy of Allied Systems.

Recently, talks have suggested that the Fleet of Retribution be a Cyrandia-only fleet, however this is controversial. There was no need for any controversey when the Delpha Coalition of Planets, who once contributed to this fleet were destroyed during the Annihilation.

With a lot of fighting during the Great Cyrannus War the fleet grew even more elite and better then they once were. Sadly with the rise of the Galactic Empire of Cyrannus made an end to the Fleet of Retribution upon Rambo Nation becoming a protectorate of the Empire. What remained of the Republic-aligned Fleet fell under the control of the Republic in Exile.

Empires with ships in the FleetEdit

The URC founded the Fleet and have huge amount of warships participating in the wars, the current commander of the URC task-force is Admiral Cretacea of the Resolute which is a Venator Class Star Destroyer, many citizens of the URC celebrate the FoR as being the most elite fleet in the universe. When the Galactic Empire of Cyrannus was formed, a small portion of the Fleet of Retribution under the command of Admiral Shavalera and Captain Roslia was left wondering the Quadrant Galaxies without anyway to get back to Cyrannus. This faction became the nucleus of the military of the Republic in Exile. 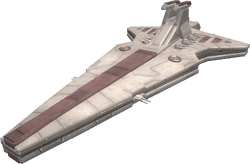 The contribution by the Rambo to the Fleet of Retribution is quite large and most are captains which have fought together for a long time. However, though the FoR has perminent ships assigned to her, the fleet is often aided by other Rambo Nation ships, battle stations or supply ships when needed and when availible. 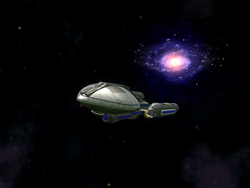 Since 05 AQF the Xiaan Alliance decide to also contribute 4 ships to the FoR. Though 4 would seem nothing compared to the larger contributions by the URC and the Rambo, the 4 Poseidon Cruiser are far more powerful and advanced. Considered the strongest ships (besides the Rambo Angforst) in the Quadrant Galaxies.

The Fleet engaged in many battles across the Trucinex War and the Second Galactic War and it is infamous to its enemies as an elite fleet that rarely loses a battle.

During the Trucinex War the foundations were laid to the forming of the Fleet of Retribution as Rambo Nation and Uniter Republic of Cyrannus (then known as the Capricyránae Sector Alliance) operated together to combat the Trucinex, though these battles were incidential and not planned before going into attack. 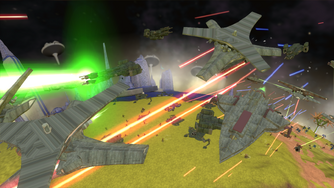 When the Imperial Alliance launched a massive campaign against Rambo Nation they called for aid, and both the URC (still the CSA) and the Delpha Coalition of Planet answered the call. The Second Galactic War became the first war the three empires operated together in battles, coordinating their attacks and giving command of task forces to various captains of the mentioned empires. In fact, the battle of Tuacio marked the official forming of the Fleet of Retribution.

Battle of Tuacio, the first FoR battle

A small section of the fleet defending the Rambo Capital. 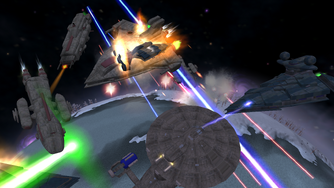 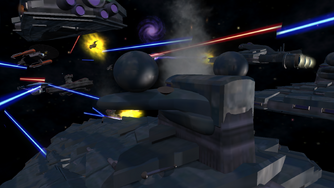 During the Intergalactic War the dreaded and vicious Cognatus attacked the URC and Rambo Nation. Bounding together again they used the FoR (now an elite fleet) to combat the Cognatus threat, but the war took a heavy toll on the FoR as there were many casualties on the allied side. 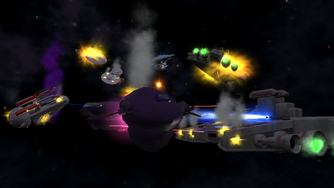 Battle of the Quadrantia-Cyrannus Wormhole 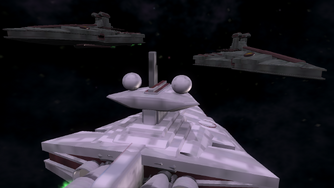 The Fleet of Retribution meet the ARS Protector 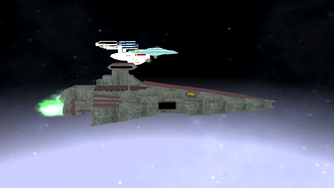 CSS Pegasus and USS Capricaerón, flagships of the FoR in orbit of Eire 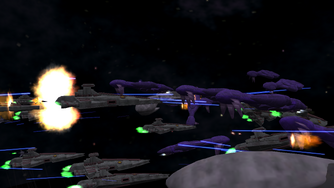 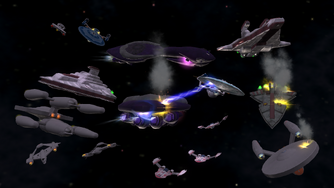 Rambo fleet arrives at the Battle of Scorpia 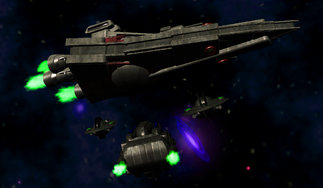 Grido Ships come to aid the allies in the Intergalactic War 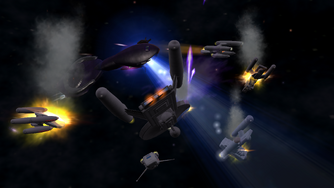 The USS Déluge under siege (introduction of the V2 fleet) 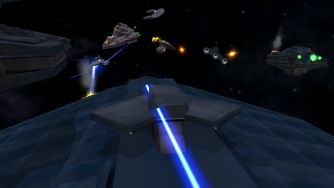 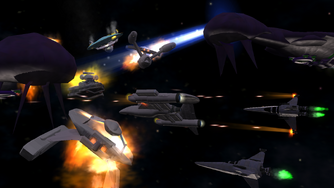 Imperial invervention during the Final battle 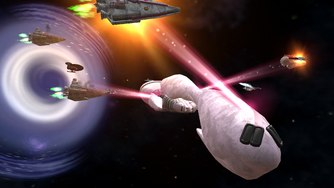 A Battle with a Cognatus Assualt Carrier

Battle of Eire.
Add a photo to this gallery

With the start of the Great Cyrannus War the FoR wasn't really used in the early stages of the war, and some believed the FoR was retired from service after both the URC and Rambo Nation experienced a short period of relative peace. Some believed this to be true as the FoR didn't see action during the first two months of the war. Yet due to the increasing Confederate threat and victories over both the URC and Rambo Nation the FoR was once again called back to the frontlines, charged with the task to protect the Cyrannus and Quadrant Galaxies.

However during the Great Cyrannus War the FoR also learned various valauble lessons, that they were able to lose battles, and losing they did quite sometimes during the war. Updated soon 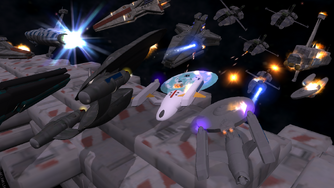 Battle of Cyroenia, the first FoR during the third month 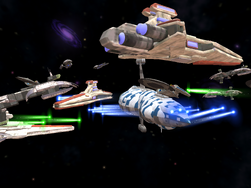 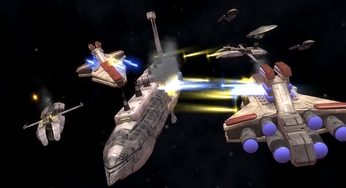 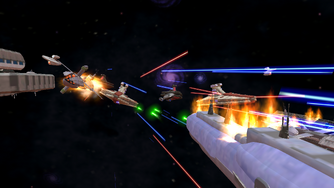 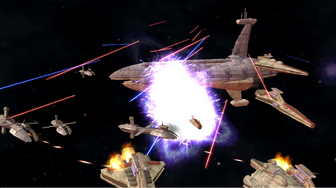 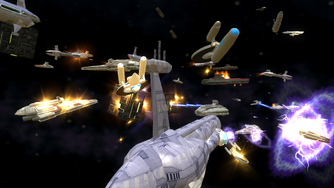 Clash in the Outer Rim of the Cyrannus Galaxy 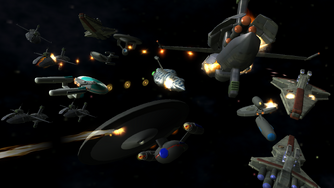 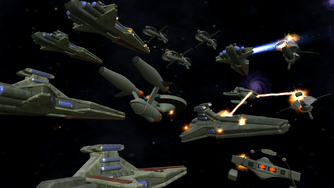 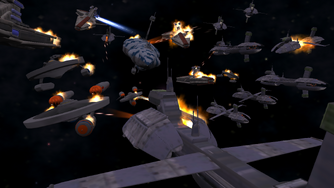 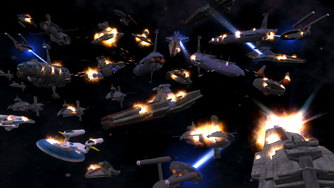 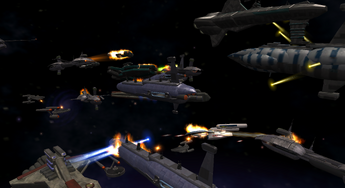 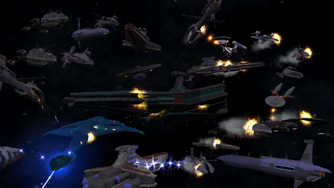 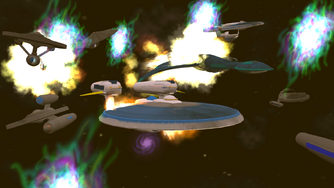 Second Battle of Nosiso (2)
Add a photo to this gallery

All the ships lister above were mostly retired from active service after the Second Galactic War, and during the early weeks of the Intergalactic War, however these ships were replaced by the V2 updates, a stronger and more reliable ships that are now the main fleet of Rambo Nation.

The V2 Cyrannus Task Fleet is the new fleet that is part of the Fleet of Retribution and the fleet consists out of the newly V2 ships, and are commanded by FoR veteran captains who recieved a new V2 fleet, thus making them more dangeorus and effective than ever before. The fleet also recieved more ships than the early FoR Rambo Fleet. A few years later, some changes were made as various Rambo ships recieved an upgrade to the V2 Mk. II status.

The fleet is led by Vice-Admiral Rambas II, though with the V2 Mk. II ships coming into service the face of the Rambo side changed again, smaller and more efficient.

Retrieved from "https://spore.fandom.com/wiki/Fiction:The_Fleet_of_Retribution?oldid=755015"
Community content is available under CC-BY-SA unless otherwise noted.