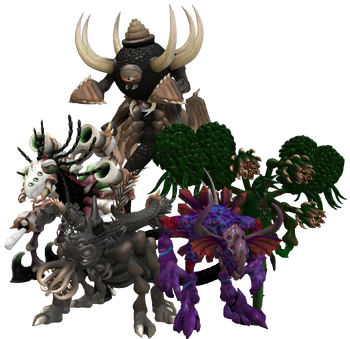 “The Devourer chose five individual creatures to act like the heralds of his dark march across the universe. The five bringers of doom destroyed entire worlds, followed by the Devourer's black fog...”

The Shu'trokermave (Vida'Rra language: They Who Brings Doom), most known as The Dark Five, were a quintet composed of the most powerful Prime Corruptus Demons of the Corruptus.

The Dark Five was first created during the War of Black Fog, almost 10 billion years in the past. Shu'rimrodir chose five specific possessed creatures to lead his forces against the universe. The Dark Five caused massive destruction to the Vida'Rra, until they were eventually defeated and frozen in Dream Energy by Rhigeo Fuerq. Eleielord, Okastana and Gobongogon were all trapped along with Shu'rimrodir into the Realm of Dreams, while Kolossus and Laidar escaped imprisonment and wandered around the empty vacuum of space for billions of years, until their prisons grew weak and they managed to free themselves. 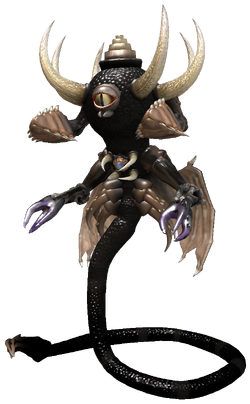 “Surrender to the Corruptus, or face a timeless suffering.”


Kolossus was the leader of the original Dark Five. An unique being of Vyro'Ralzan nature, Kolossus was unique for using entropic energy, psychic powers and Dark Chronoscopic against his enemies. He was the smallest, yet he most powerful of the original Dark Five, and possessed no associated demon race except for his Loron'Kikra creations. During the Second War, his target galaxy was the Ottzello Galaxy.

During the Second War, Kolossus was destroyed by Mac and Tyraz while he was leading a Loron'Kikra invasion into New Draka. Kolossus was brought back to life after the Annihilation, but he no longer serves the Corruptus. 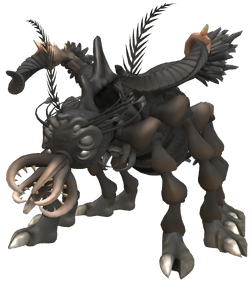 “We feast on the flesh and soul of the weak!”


Eleielord, the Spider Lord of Doom, was an arachnid-like monstrosity of almost 30 kilometers of height. With six immense legs and two arm-like limbs with gigantic spikes, Eleielord was one of the most well-built of the original Dark Five. His associated demon race were the Eleiethae. During the Second War, his target galaxy was the Andromeda Galaxy.

Eleielord's skin was terrifyingly resistant, though not as tough at Gobongogon. Prolongued orbital bombardment did little damage to Eleielord, though the Draconid Imperium managed to pierce his skin and wound one of his shoulders. His skin continuously bred new Eleiethae demons which swarmed those who tried to fight him. Personality-wise, Eleielord was hot-blooded and enjoyed the destruction he caused more than any other Dark Five member. 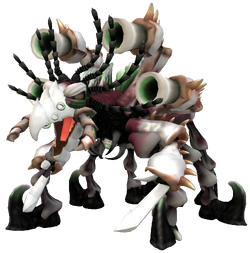 “Under my sight, all who oppose the Devourer will suffer!”


Okastana, the Sniper of Darkness, was an avian-insectoid creature of 16 kilometers of height and the only member of the original Dark Five identified as a female. With several cannon-like structures coming out of her back, Okastana was created to be a planet-destroying artillery gun. Her associated demon race were the Okasthae. During the Second War, her target galaxy was the Cyrannus Galaxy.

Okastana's artillery cannons fired large blasts of Nightmare Eneryg, powerful enough to take down highly advanced spaceships. Her air was exceptional and like her title suggests, she could snipe targets from extremely long distances with ease. Her endurance was the lowest out of all original Dark Five members, and if forced to fight at close range, she would use a pair of immense entropic crystals which were located where her hands should be. Personality-wise, Okastana was power-hungry and showed frustration when she lost the opportunity to become more powerful. 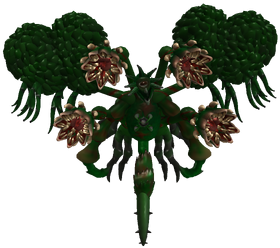 “I demand blood! Mortal blood for my roots!”


Laidar, the Floral Menace, was a demon-turned planet reaching 41 kilometers of height. Displaying a gigantic tree-like structure, Laidar was the second largest of the original Dark Five. His associated demon race were the Laidarthae. During the Second War, his target galaxy was the Milky Way Galaxy.

Laidar displayed extreme toughness, more so than Okastana and Kolossus but not as much as Eleielord and Gobongogon. His vines could grow deep into a planet's interior so he could then crush its crust from inside out, leaving nothing but an asteroid belt after he left. His mouths were notably more vulnerable to damage than the rest of his body. Personality-wise, Laidar was one of the scariest Dark Five members as he displayed extreme pleasure in devouring mortals alive and have their blood run through him, almost as if he was seeing it a fertilizer for his roots. 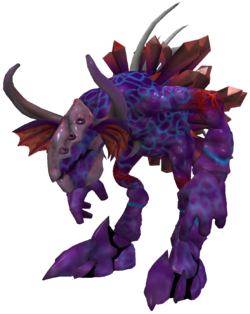 
Gobongogon, the Crystal Beast, was overall the weakest and by far the largest member of the original Dark Five. However, he was by no means weak. He was fairly humanoid in appearence, sporting a gorilla-like build, but having a beaked, eyeless visage and immense crystals coming out of his spine. His associated demon race were the Val'dahr. During the Second War, his target galaxy were the Grox Meta-Empire's stronghold galaxies.

Gobongogon notably had the trait of being nigh-invulnerable. Lasers, explosives, blasts or pulses did not even scratch his hard skin. However, his internal organs did not sport this ability, which eventually proved to be his undoing when the Grox ghost-phased through him and planted explosives on his insides. Personality-wise, Gobongogon was frightening cold and content with his role of being a destructor, considering mortal life wrong and seeing himself as a bringer of true harmony. He spoke in a slow, almost tired voice.