“We Ravenrii are not a violent species by nature. But when we're aroused, we tend to... ignore our nature”

The Grand Army of the Federation of the Core Worlds is the standing army of the Core Federation. The Army is the largest military organization in the galaxy, composed of 35 trillion capital ships divided into five 7,000,000,000,000-ship Grand Armadas. The Army is led by three High Generals and two General Lieutenants, chosen by the Federation's High Viceroy. It is used to capture and invade worlds by the Federation, protect its colonies, patrol the Empire's trade routes, blockade enemy worlds, attack other Empire's enemies, and support attacked or ravaged Federation worlds. The Army's three leaders respond to the Ministry of Defence. For the hierarchy and leaders of the Army, look here.

The Army is composed of 35 trillion capital ships. Three High Generals command three of the Army's 5 Grand Armadas, and General Lieutenants command the remaining 2. The Army has long been stationed in Xanthrus Spiral, but has recently had several fleets deployed to fight in the Second Galactic War, the DCP's Civil War and the War of Ramvelkys. The Army was created to protect the Federation's interests. There are also approximately 980 trillion active "troopers"-mostly consisting of bio-droid forces, as Ravenrii troops are very valued and rarely ever used.The entire standing Army was commisioned and built by the Core Federation's CoreFleetSystems ship manufacturer, and is funded by the InterGalactic Bank of the Core.

The list is organized by each ship's classification size.

The single largest starship built by the Ravenrii, the CSF Supernova is a leviathan of Chronium and steel, the personal flagship of the Federation's High Viceroy. It is over six-hundred-thousand miles long and four-hundred-thousand wide. The ship has enough room for the entire High Court to hold sessions within it, requiring a living crew of over 3 million Ravenrii, though it is partly automated. It is one of the most costly starships that the federation has ever built, dwarfing even the massive EMPEURON-class Worldship: contruction almost bankrupted the Bank of the Core, the CorFed's reserve bank. It is also a formidable fighter against capital ships, though it is rarely seen in battle. It is regarded by the Ravenrii as a new generation of Worldship.

The EMPEURON-class Worldship is the single largest army starship pruduced by CoreFleet Systems, the largest ship manufacturer of the Core Federation. The ship, deemed massive by usual standards,is over four-hundred-thousand miles long and three-hundred-thousand miles wide. It is the complete epitome of the Federation's wealth, as it is extremely costly; only five were ever produced, one for each of the Federation's five Grand Armadas. the ship is also the federation's second most powerful, boasting over 900 plasma ion cannons, 500 mega-turrets, strong frontal and side shields, five VORTEX-generators and 60 squadrons of over 80 CELIAM-class starships. Besides VORTEX-class ships and the CSF Supernova, it is the only other class to have vortex generators. 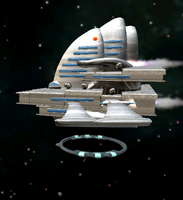 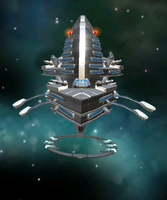 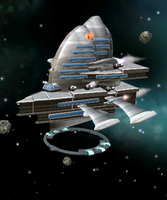 The CORONA-class super star destroyer is the second-biggest ship produced by the Ravenrii's CoreFleet Systems. Usually used as a command vessel by the CorFed's army commanders and grand admirals, it is also the Federation's bulkiest ship and its second most powerful. CORONA-class Super Star Destroyers are ususally the commanding vessels of COLOSSUS-class and PERSECUTOR-class Super Star Destroyers. Much more common than the EMPEURON worldships, the ships were built on a massive scale and are the second most-common of the Army's ships, after the COLOSSUS destroyers. They have over 600 ion cannons, 300 mega-turrets and 30 squadrons of 80 CELIAM starships. 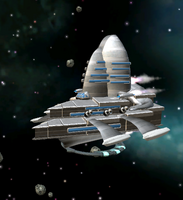 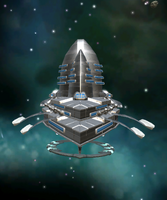 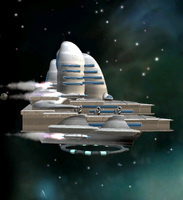 The COLOSSUS-class of super star destroyers are the Ravenrii's third-largest ships. They form the bulk of the Army's fleet, and are the third most heavily armed, with over 500 ion cannons, 150 mega-turrets, a crust ray and 25 squadrons of 80 CELIAM-class starships. The ships are some of the most durable in the universe, covered by solid Chronium hulls designed by the Spectrum Design Collective. Their weapons systems are also suited to attacking in large numbers, as they have strong side shields to protect their parties from heavy fire. COLOSSUS-class ships are also suitable for planetary sieges-they possess, besides the standard weapons, a single crust ray that can blow over a capital ship with a single shot, utterly perforating its hull and inner structure. 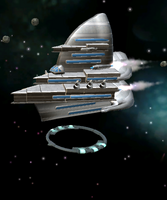 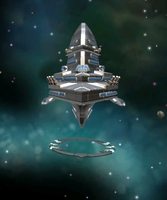 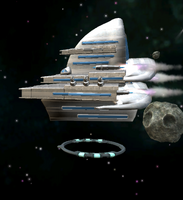 VORTEX-class star destroyers are perhaps the less-known ships in the entire Army. They are the Army's most unique ships its fourth-largest, as well. VORTEX destroyers possess special Ravenrii technology developed by the Spectrum Design Collective called Vortex Generators. The generators, which look like large disks on the sides of the ship, produce gravity wells and electromagnetic vortexes that immediately neutralize any ships within radius. They short-circuit communications arrays and stop ships from contacting enemy fleets, while at the same time grounding their engines by reversing the gravity flows around them. Because of this, the ships are among the mpost precious of the Army's ships and are always heavily escorted-the energy that the generators require do not leave surplus for weapons on board. 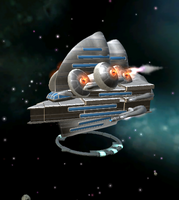 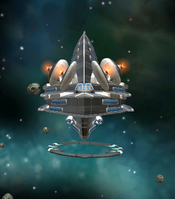 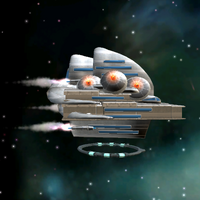 PERSECUTOR-class Star destroyers are the smallest of the Ravenrii's capital ships-they usually form the first wave of attack, backed heavily by much stronger ships, like COLOSSUS and CORONA-class Super Star Destroyers. As all of the CorFed's ships, they possess a chronium hull that deflects most attacks. Since PERSECUTOR-class ships are only around three miles long, they attack in hordes, much like the CELIAM and CLAWCRAFT starfighters, and try to pass through enemy lines as larger ships pound on their forces. These ships are unusually flat, unlike other Ravenrii craft, which usually have a tower going through the middle of the ship. 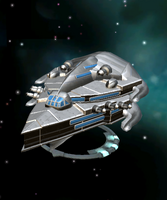 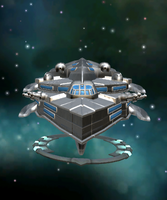 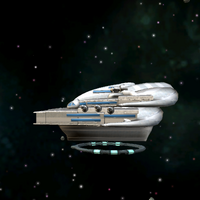 Average-sized starships measuring up to half a mile in length, CELIAM-class ships are found in groups on Core Federation capital ships. they almost always possess a small horde of CLAWCRAFT-class starfighters, which they sometimes store in their cargo hold. During an attack, CELIAM ships aboard capital ships are deployed, usually in groups of 80, each with a 20-CLAWCRAFT starfighter group around them. While they lack the major firepower that capital ships and Super Star Destroyers possess, CELIAM ships attack at relatively close range on enemy vessels to try to disable their defenses. These ships are widely used for other funcions as well. 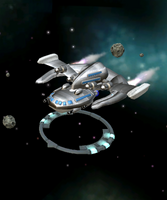 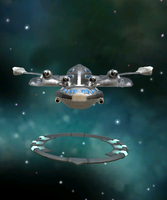 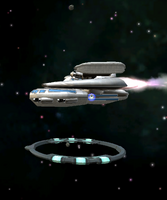 Clawcraft-class starfighters are small, small-tripulation starfighters that are deployed in massive numbers from aboard CELIAM starships, Star Destroyers and Super Star destroyers. They have a unique, plasma-based propulsion system that cannot feed larger ships. 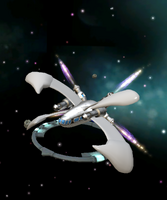 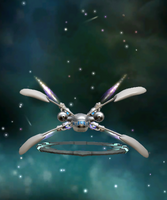 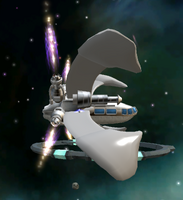 Besides all of the levels of starfighters, starships, Star Destroyers and Super Star Destroyers that the Army builds, it also constructs non-military ships, such as the Galria-class dimplomatic shuttle. Most of this ships are commissioned by the very wealthiest of the Ravenrii, as expemplified by Queen Alestra's exceptional star yatch, the Gliding Star. Star yatchs, pleasure starships specially equipped for comfort and luxury, can sometimes reach the size of small capital ships-such is the case of the CFS Gliding Star, commissioned to the Army at the begining of Queen Alestra's rule to serve as her royal luxury yatch and entertainment ship. Diplomatic ships, which usually have space only for a few dozen, are regularly unarmed but have strong shields, all the better to emit a peaceful aura. they're usually built for the Corfed's Federal Diplomatic task Force.

Most of the Army is currently stationed within critical points inside Xanthrus Spiral. However, one of the First Armada's three regiments, composed of 6 billion ,four million ships was deployed to fight in the Delpha Coalition of Planets, as the Coalition's government is allied to the Federation. Additionally, the Ravenrii's special Ravenriii troops shall accompany Queen Alestra during her official State Visits to the Core Federation's allies' galaxies. There are also deployments of troops that have accompanied the colonists to the Cyrannus and other allied Empire's galaxies, and the Ambassadors to such Empires. The Ambassador to the Jarquvix Federation, for instance, departed with 200,000 starships. In recent times, the Army has sent a full Armada to aid the Sylit Republic in the War of Ramvelkys.

Other than the 35 trillion war ships that the Federation owns, there are more forces that it uses to protect federation dignitaries, for diplomatic missions or for foreign wars. These regiments are usually rarely mentioned with Army listings.

Federal Diplomatic Task Force(FDTF)-5 million ships.This task force is used to escort foreign digintaries, such as other Empire's Ambassadors, into their assigned planets or Embassies within Xanthrus Spiral.They can also be sent on diplomatic missions to guard the Federation's envoys to other Empires, excluding the Queen or the High Viceroy, who have their own forces.

Royal Federal Guard(RFG)-400,000 ships. This elitetask force is charged with the protection of the Queen and Highj Viceroy of the Federation. they are precious, as they are unique forces of assigned and especially-trained Ravenrii.They also Escort the Queen on state visits.

Retrieved from "https://spore.fandom.com/wiki/Fiction:The_Core_Federation/Grand_Army_of_the_Federation?oldid=700961"
Community content is available under CC-BY-SA unless otherwise noted.