If you are a member of the Milky Way Cooperative you can edit this.

The Milky Way Cooperative had now spread its influence to many more civilizations around the galaxy, apart from xenophobic ones too hostile to accept a mutual civilization, or Tier U intelligences so alien they are incompatible. The galaxy began to recover, especially minor races and even Truly Alien life fell under its protection.

But ultimate aim was to enhance the galaxy for all its members, building up to Post-scarcity so there was less wars over common goals, a stronger defense against external threats and to expand the Milky Way's influence ever further. But now the Cooperative had to build its infrastructure, in three simple steps. The first step is to find the space to use. Luckily, the Core Federation had recently given up much of its territories in the Treaty of Galayru. The Commonwealth Realms, consisting of the Delpha, Tax'Ta and Jave'Ruii were prime candidates, a wealth of 38,000 systems. Its members must establish joint military outposts in order to claim it. In the second step simultaneously as the first colony and scientific ships scour the galaxy for more technology and resources and finally in third step, the DCP would help set up its infrastructure.

Despite the recent Vartekian War, fleets of "The Civilization" were mobilized almost immediately to gain control of the Milky Way Commonwealths. The Human Republic was soon to re-colonize Uranus, while other members secured other CoreFed colonies.

Due to its proximity to the Delpha sector, the Commonwealth of Delpha was absorbed quickly. The DCP dispatched 5 Gargantuan class Ultra Dreadnoughts, each flanked by a hundred Dreadnoughts and even more Colony ships to the Delpha region. The colony ships released clouds of Von Nuemanns, self-replicating assemblers programmed to multiply and spread out, building small automated defense outposts and Drove Hunter bases.

The Gargantuan and Dreadnoughts secured a strategic perimeter around the Commonwealth. As the Von-Nuemanns explored, they terraformed sites to prepare them for colonization. The beautiful, yet ghostly cities of the Core Federation were beginning to be re-populated, although much of their technology was gone with them. As new sunrises began, ships crossed their skies once more. The Commonwealth of Delpha was where "The Civilization"'s infrastructure building would start.

The new Commonwealth got plundered by a Vartekian and MSP trike, winning over 36 battles, many of which claimed by their Ensembler superweapon. One of DCP's Gargantuans faced off against the Vartekian supership, but neither destroyed each other. After that it was stalemate, and "The Civilization" could continue.

The Commonwealth of Tax'Ta was close to Taxton space, one of the richer Milky Way civilizations. The Civilization decided to share Tax'Ta, the Taxton who tend to avoid contact since their Grox allies were defeated minded their own business. Colonization of the Commonwealth by the Gjigantrox Interstellar Empire has begun. The Gjigantrox were quick to sign the Treaty of Galayru, and though they are saddened by the departure of their allies, the Ravenrii. They are making all haste to colonize Tax'Ta, although the process is occurring much more slowly than it is in Delpha.

Situated near the Jovar Empire, this location also held a strategic position. The empire had recently split, but the Joran Planet Alliance has accepted membership. Colonizing this region will prove more difficult as the split factions continue to deteriorate. "The Civilization's" members agreed to set up some military outposts to support JPA colonies.

Once enough discoveries were made, the DCP began to build the infrastructure for "The Civilization".

The Grid - built top down Edit

The Grid's main component is a spatial lattice of Superluminal tunnels (also known as Krasnikov tubes). They are usually constructed by sending a very heavy mass of exotic matter close to the speed of light in a straight line. The Grid was planned to integrate nearly 50 systems throughout "The Civilization". However, they could also be created from subspace, meaning that the project would not take thousands of years to complete. The Grid was built first, there is always some uncertainty where the tunnel opening will be, and it would be a waste of resources if the Dyson bubble enveloping the star would have to be shifted.

Within another few days the DCP had created the tunnels. They collapsed due to subatomic feedback, but new ones were outfitted to replenish them from occasional bursts of a gravitic beam. Some particles were sent through to make sure the structure was "clean" and to flush out any topological defects. 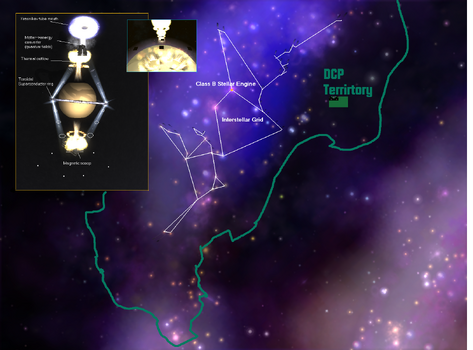 The Dyson bubble construction did not take long either. The DCP had mass produced millions of mirrors and energy transferors and matter-energy converters. The mirrors were of a special kind, and orbit the star, collecting its star light and then reflecting the light as pure solar energy. But the more advanced part of the structure collects the plasma its self from the star in a process called Star lifting, an advanced technique used by civilizations that are Kardashev II.5. A huge ring of superconducting magnets orbit the stars equator, and generate a magnetic field which squeezes the star slightly, causing powerful coronal mass ejections and channels it towards the Krasnikov Tubes. But first it must enter a matter-to-energy converter, which using quantum fields crush it down into pure usable energy which is pumped through the Grid, to be received on the other side.

Once constructed, within 2 weeks, the Grid was linked to the 50 systems, the Straggler cluster and to the wormholes which lead to the Cyrannus galaxy. The process usually has taken years, but the DCP used a combination of faster than light travel as well as mass production in conjunction with other members of the Cooperative to achieve this goal quickly.

Some of the Grid stars were cloaked by concentric shells of Computronium, clouds of programmable nanotechnology, which use the star's immense solar energy to calculate and compute massive programs that are important to the DCP and "The Civilization". The stars were dimmed almost to the microwave background, because each shell used a different temperature radiated. This led to controversey in one system where an inhabited planet was undetected. Usually the DCP would leave the world to die, but under "The Civilization" its life was relocated.

The DCP decided to do something they had never attempted before - create a star (though they have made them unstable or tweaked them). The DCP injected about 100 Q balls. Usually Q balls are used to disfigure the weak force in stars by causing them to collapse, but this was already a psuido-star that had died in its infancy. The star would not last forever, but in the q-ball's reaction great heat would revive it, creating a fusion reaction that could last for several centuries. 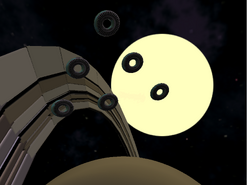 The easiest way to achieve goals and industry in space is to move industry to space. The DCP planned to build at least three Disk orbitals for "The Civilization", to be used as industry and research hubs. They were not massive system-sized Rings however, but they were still the diameter of small moons. A Disk orbital is distinct from a ringworld, it is shaped like a CD, but its circumference means that it can have multiple biospheres on the top facing the sun, and industry/urban levels on the back side. But perhaps the most interesting feature is that they are CD's. As sunlight hits the disk, they can be used to program massive computers, as well as controlling the amount of sunlight hitting a planet. They can focus sunlight into powerful laser too for self-defense. The DCP estimates that they will be completed in a couple of months, using replicators, nano-assemblers and vast resources they have at their disposal.

The black hole in the center of the Straggler cluster was actually an Intermediate-mass black hole. Due to the dense population of stars crowding around the black hole, material for stellar wind, hydrogen and solar material accretes around the black star, supplying it with many materials. The accretion disk becomes superheated, which using superconductors such as the ones in Stellar lifting, can be extracted. The jets that is emitted by the accreting matter is also a powerful but unpredictable power source. But the energy the DCP wants to extract most of all is Virtual energy (Hawking's radiation). Virtual energy exists in every point in space, two pairs of particles flit in and out of existence so quickly nature doesn't "notice" (no violation of the conservation of energy laws), one is positive and one is negative mass. When they form around a black hole, the negative particles fall in (decreasing the mass of the black hole), but the positive mass particles escape. This is an almost unlimited power source and also generates exotic matter.

The Milky Way Cooperative's Kerr Metric gate will be built around the black hole. The exotic matter it generates will be used to spin the singularity into a ring - a portal to another domain. The DCP already has several Kerr Metric Gates, and this one will be shared in times of need. It will also become a Matrioshaka brain.

There was at least several wormholes leading to the Cyrannus galaxy, but none of them were very safe to transverse. Using the new Gravitic Resonance beam, the Milky Way Cooperative will hopefully be able to "slow the current".

Retrieved from "https://spore.fandom.com/wiki/Fiction:The_Civilisation/Goal_3_-_Galactic_Infrastructure?oldid=680714"
Community content is available under CC-BY-SA unless otherwise noted.