Troubles of the Jenassian Kind

Troubles of the Jenassian kind focuses on the Jenassian Regency and its colonial setor in the south of Quadrant 82, bordering both the Rambo Nation Badlands Colonial Sector and the eastern borders of their enemy, the New Cyrannian Republic! First contact with Rambo Nation proved disasterous and set tension tight between the Rambo and the Regency, though both didn't want an armed conflict and ordered their officers to prevent such a course of action.

But others might even take advantage of the tense situation and would be glad to see a new armed conflict now that the New Cyrandia Wars have ended after the fall of the Cyrannian Imperial State at Vasuband. 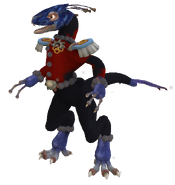 Star date 03.01.08AQF, the third of january, two days after the new year the recently promoted captain S'aur sat in his command chair, pleased by the performance of the new Oberth-Class short range scientific light-cruiser. His science officer, lieutenant Chiäe Giusti lookd at her sensor readings, at behest of vice-admiral Ramcard she and S'aur were to take the Oberth-Class on her maiden test voyage. So far the USS Grissom performed well and without any hick ups, they even discovered an interesting asteroid just outside the borders of the Badlands Sector.

S'aur waved his hand in dismissing.

As the USS Grissom approached the asteroid, Giusti laid back in her chair, crossing her legs she read the scientific report. This asteroid appearance was rich on materials, perfect for harvest and studies. Suddenly the humanoid helm lieutenant warned the two of a proximity alert. A brownish vessel dropped out of warp and approached the USS Grissom. S'aur looked surprised, and ordered a yellow alert, with shields raised Giusti opened a channel for the captain with the unidentified vessel. Coming in view screen was a humanoid reptilian male, who looked all but happy.

Giusti and S'aur looked surprised, the two never heard of the Jenassians before. While S'aur apologized and replied, Giusti checked the Rambo Command database but found no reference about them.

Before S'aur could issue a red alert and charge the phasers, the Jenassian cruiser fired its weapons. The first target the port nacelle, the second the bridge and the third the port nacelle again, the precise method and high energy impact overloaded the shields of the Grissom and disabled the warp drive as a fourth beam caused hull fractures. Rising from his chair, various Jenassians beamed abort and raised their weapons, with no choice S'aur issued a surrender for his 35 crew members, though Giusti did manage to send out a general distress before being back slapped in the face as punishment.

At Rambo Command headquarters, marscalcus Kya looked at the report in awe. The USS Grissom, the test bed for the new awaited Oberth-Class short-range scientific light cruisers send out a general distress call before contact was lost. Something happened less then a light year beyond Rambo borders with the Grissom. Sighting she contacted the nearest vessel, the USS Brittain, a Miranda-Class that was patrolling the Badlands Sector border to investigate and retrieve the vessel in hopes nothing happened to S'aur, Giusti and their crew.

Leaning back against her chair, Kya sighted again. This was the worst part of being the Marscalcus, highest authority of Rambo Command, sending loyal and devoted officers to their possible doom, something that remained a heavy burden.

Elsewhere, the USS Brittain crossed the borders of the Badlands Sector in search of the missing USS Grissom. As the Miranda-Class approached the mysterious asteroid, Venullius was informed that warp traces were detected, matching that of Rambo vessels and another unknown. Beaming onboard some debris, Venullius was informed that it matched that of the Grissom, though it was impact damage only, there was no sign of the ship, meaning that it was not (yet) destroyed.

His helm officer, a male Libertus confirmed. Turning away, the Brittain began following the trace. After another hour, long range sensors detected a space station, as well as the USS Grissom docked there. Narrowing his eyes, Venullius surveyed various brownish/yellow vessel surrounding the station.

His tactial officer, a female Qhumanoid informed him that Rambo databases did not recognize them, though engine readings suggested they probably hailed from the Cyrannus Galaxy. Signaling his Libertus helm officer, the USS Brittain laid in a course towards the station, with shields raised and tried to hail them.

The moment the signal was send, two larger Jenassian ships dropped out of warp, arming their phasers and raising their shields, captain Venullius looked rather disappointment. His tactical officer informed him the signal was answered, they were allowed to provide a dignitary to treat with the representatives of the Jenassian Regency!

Stardate 04-01-08AQF, half an hour later after their arrival at the station, captain Venullius boarded the station with a security detachment. As a natural diplomat he was eager to find out what the Jenassian wanted. The delegacy was welcomed by Gul Arritzia Dar'Aehl. The Jenassian talked smoothly, about their great Regency and the possibility for a cooperation.

The Jenassian officers looked uneasy at Arretzia, Venullius guessed the attack on the Grissom was done without permission of the Jenessian authorities.

Looking rather startled, Venullius chose his next words carefully.

Arretzia nodded, with Venullius offering more insight in Rambo matters and borders, the two officers gained a mutual respect for each other, though didn’t trust each other at all. Near the end of the gathering, Venullius set the first steps in motion for a diplomatic build up between the Regeny and Rambo Nation. The Jenassian agreed to release the crew of the Grissom as a gesture of good will as well, and both ships leaved the station unharmed and unchallenged.

Approaching Lianna-station after leaving Jenassian borders, Venullius could only wonder how the New Cyrannian Republic would react to the Jenassian presence so close to their borders. After all, he had agreed at their behalf that the Jenassian were allowed to use the Ramsoria Run as well, including the facilities on the station. This was something its commander probably would not be happy with, as captain Rambas II was a well-known supporter and open minded pro-Republic officer with Rambo Command.

Gul Arritzia Dar'Aehl watch in discomfort at the leaving USS Brittain, under command of that annoying diplomatic Venatioa, captain Venullius. His unprovoked and unauthorized attack at the USS Grissom, that was under command of a HarbronrSaurien, captain S'aur left his position as a Gul uncertain. Something had to be done, to save the Jenassian Regency from oblivion and secure his own position, diplomatic talks had to be prevented.

Leaving the station onboard his Praxu-class, the Renassian Arritzia and his crew travelled to remote sector, deep within the Jenassian Colonial Sector. Dropping out of hyperspace, his own cruiser was intercepted by two other Praxu-class cruiser.

The helm officer replied and the two cruisers allowed the Renassia to dock with the far larger Tevada-class. At the bridge of the Tevada, Arritzia smiled, his experimental design proved a succes already. Sitting in the chair, he alerted the crew:

Retrieved from "https://spore.fandom.com/wiki/Fiction:Tertius_Bellum/Troubles_of_the_Jenassian_kind?oldid=708275"
Community content is available under CC-BY-SA unless otherwise noted.