Immensely powerful, lost to the ages

Lost to the ages

Lost to the ages

Many, lost to the ages

Hundreds of quadrillions; now, none

Millions of years
“Everywhere. Everywhere we find them. The ancients. Elder beings from the past, all across the gigaquadrant. One thing puzzles me. Why all of them, despite all their might, all their greatness, have been destroyed, vanished without a trace? Vida'Rra of Milky Way. Precursors of Bunsen. Cold Ones of Borealis. Temoin of Cyrannus. Hrezi of Kraw. Countless other ancients ALL OVER THE UNIVERSE. And now... Tertamians of Andromeda. Why? Why does the hand of Grim Reaper always have to come after the great beings? Why is death inevitable? It is always coming, always coming...”

The Tertamian Alliance is the ancient civilisation of Andromeda, reigning millions of years before - but after Venhokwe. Inheriting technology of other precursors of the galaxy, the TA managed to expand in power and become even greater than their predecessors. However, an unknown event, presumably a great war, caused its destruction - similar to what happened with countless other ancient civilisations.

By the will of chance, the Tertamian Alliance is the most well known to the young civilisations among other Andromedan ancients, due to some databases left on the faraway world that survived whatever destroyed Tertamians. Databases stated that Tertamian Alliance originated from a planet in Segmentum Crepusculum known as Il'larion, after a devastating nuclear conflict all across this planet and beyond, on the entire system that was called Tertame. After the war nearly destroyed the whole system, Fabulus Noraes, the leader of the Alor Republic that controlled small but powerful territories all across the system, proposed a creation of the united federation that would unite the decrepit worlds. Since Alor Republic was neutral during the war it was not seriously devastated and its economic power resulted in most of the nations accepting the proposal, planning to rebuild.

Shortly after the unification of Tertame, a grand invention was made as the way to move across the galaxy was found, and the FTL warp spaceships left Tertame shortly after. However, they encountered yet another threat lurking in space. The deadly Cyber Rabies, the mechovirus corrupting all life, attacked them, turning the Tertamians into mechanical monstrosities. For several decades, cyborg Tertamians roamed the galaxy, slaves to the virus, spreading the corruption. Only by the powerful weapon used by the Grox could Tertamians be liberated, and when they were, they found themselves scattered across the Segmentum Crepusculum with new powerful technology but with little recollection of what happened before. Thankfully, using mechanisms used by Cyber Rabies, Tertamians quickly restored their might and magnified it, and once again many scattered Tertamian nations started to rebuild, fighting each other and colonising new lands. During this time, they also met the Delly, another species that suffered similar fate. Eventually, small Delly and Tertamian nations eventually united under a new banner, and on Il'larion, a treaty was created that gave birth to the new power, the Tertamian Alliance.

The newly-formed alliance then quickly expanded, unifying more species from all over the Segmentum under its sway. During this time, the TA also managed to befriend the Grox, forming beneficial if somewhat unstable relationships between two civilisations. However, it also resulted in its eventual downfall. Another empire from the Segmentum Draco, the terrific Hydrargyrum Galactic Commonwealth. While it is described as tyrannic and warlike in Tertamian scripts, nothing precise is said about this civilisation. Neverthless, it is clear that this Commonwealth has united many species with anti-Grox policies to strike against both the Grox Empire and its allies. A massive war soon erupted, resulting in much of the Andromeda being devastated. At first, Tertamian Alliance proved no match for the HGC, but eventually, they managed to succeed thanks to arrival of a new species in the alliance, the Timpus Empire.

Coming from another galaxy, Timpus Empire was powerful and with advanced military technology at the level of HGC itself. Why have they sided with the Alliance is unknown, but it is presumed they had some conflict with HGC before. Striking a deadly blow, scales of war were put to a balance and the leaders of both HGC and the Alliance signed a truce. For several decimillenia, Andromeda knew peace, until a new force called the Memfian Imperium, led by deceptive Rades and the mysterious Neodominath, attacked both empires, starting a bloody war between three sides. The second war took lives of many, but after the war, a terrible event happened.

Tertamian Alliance was gone, as were all other Andromedan empires. Nobody knows what happened, and nobody wants to know... 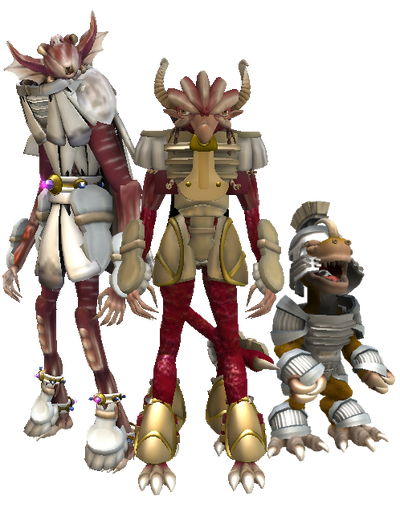 Tertamian Alliance was composed of many species all across Andromeda, but three prime species are known: Tertamians, avian creatures who were the founders of the Alliance; Delly, their first allies and powerful scientists, and finally Timpi, extragalactic warriors that composed the military force of the Tertamian Alliance. Other species were here as well, but their names are forever lost to history.

Tertamian Alliance is believed to have liberal, democratic society that considered invididuality to be the most important; however, it was also quite corrupt and often hypocrital, conquer small and week civilizations that held important resources for the sake of "bringing democracy unto the tyrants". This gave them a fairly dark reputation among many ancient Andromedans. However, it had its good sides as their society was greatly meritocratic and species discrimination was nonexistent, and talented people were generally honoured. Art, music and culture flourished under the rule of the Alliance, although exact things are generally unknown, lost to the past.

Economically, Tertamian Alliance was capitalistic, most of the industry ruled by large cartels that held high authority in the Alliance society. Overall, it controlled worlds across Segmentum Crepusculum, Segmentum Draco and Outer Andromeda, the exact amount of planets being ~20 millions. As such, the Alliance was vast, and as its name would imply, was generally only a federation of thousands of small civilisations that were all different in culture and advancement. Among these millions, there were both shining ecumenopoli, pastoral and backwards feral worlds, burning mining colonies and many other planets, all united by shared law of the Tertame.

Tertamian Alliance was a federal republic governed by a vast and powerful bicameral parliament known as the Grand Council of the Alliance. Thousands of Councillors met within the assembly on Il'larion, debating to decide the nation's future actions. Greater power was given to the upper house of parliament, the Inner Circle governed by ten Lord Senators. Lord Senators were elected on a fairly long term that could last several decades.

Tertamian Alliance was a parliamentary republic; as such, it had no single leader. Generally, the state was represented on diplomatic meetings by one of the Lord Senators - which one depended on the matter of circumstances.

As a tier 1 civilisation, Tertamian Alliance's technological prowess and advancement were quite powerful. Many technologies were inherited from Venhokwe or Cyber Rabies while others were bought from Grox Empire or developed in the Alliance itself.

Only three ship types of the Tertamian Alliance have survived its fall, still frozen on the derelict planets across Andromeda. 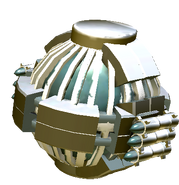 Tertamian sphereships are small cyan frigates 10 m in diameter. It is believed that they served as the mainstay of Tertamian fleets.

Galactic Tyrants were, as supposed to be, primary warships of the Alliance, based on Timpus designs. Remaining Tyrant relics are certainly extremely powerful, and AGC leaders plan to use them in battle against the current Grox threat.

Tertamian Arks are the most powerful and ancient Tertamian spaceships encountered. Only one of them was found so far, being more than 5 kilometers in length, invincible and destructive. Their purpose and exact characteristics are unknown to AGC currently.

Tertamian Alliance used many powerful weapons to empower its rule among Andromeda, ranging from simpel battleknives and fusion guns creating miniature thermonuclear reactions to the dreaded Glaci-Terra cannons that turned the whole worlds into iceballs in the matter of seconds, or the dreaded Veil of Flame that could induce supernovae. Some of these weapons are still here in Andromeda, machines of terror that remain frozen, thankfully for eternity.

Outside the warfare, Tertamian technology was impressive as well. It is said that via gravity control, the Alliance moved the stars freely to create stellar art, to make constellations and attracted planets closer to stars in order to make them habitable. It is also believe that they were able to control Gyronic energy via their technology, making them able to commit short time travels to various points in the past and the future. This was considered to be the Alliance's main advantage against its enemies, as it gave it ability to alter the history itself.

However, for all its might, Tertamian Alliance was greatly dependant on energy and resources; despite all its might, it had not developed any powerful quantum replicators and zero-point energy; at such, it primarily relied on stars and planets for gathering whatever it needed to build its machines.

Many think that Tertamian Alliance had created the Inheritance and possibly even the artifacts of the Andromeda War, but these are mere rumours.

“The Precursors. They are everywhere.”

“Their tech is most interesting. The reason precursors die, is because most get blinded by arrogance, and their weakness. That is why our race is eternal.”

“I remember spending my earlier years studying artifacts archaeologists would bring in from various worlds. Tertamian designs had a certain elegence to them that I could never quite understand - even their warships could be elegant enough to pass as luxury liners.”

“It's a shame they died out, I must say. They were very intelligent beings.”

“I remember your citizens in our worlds. Our races were linked in many ways.”