The weak shall not bring shame to our home.

19,368 years old
“The Gros. Horrid creatures. They enjoy destroying out of spite for who they consider weak. The day they are put on their place is the day we will finally have a reason to feel any happiness of our lives.”

The Stratocracy of Karnagtah was an empire whose territory extended through Segmentum Exterioris at the Andromeda Galaxy. Created about twenty thousand years ago, it served as the empire of the Gros race following their rise above their former slaver masters, which they turned into slaves themselves, and had its main philosophy that the weak had to serve the strong, and the strong had to serve the Gros.

The Stratocracy was an empire which promoted war, conflict and slavery, with the latter becoming the most famous trait of it through the ages. While the empire terrorized their sphere of influence through its existence, it was eventually destroyed by their own hubris and by the machinations of the Brotherhood. Today, the Gros are a fragmented, weak and forgotten race, and the fate of their former slaves is ambiguous at best.

The Stratocracy was formed nearly 20,000 years ago, when the Gros rebelled against the race that had enslaved them, the Kahiwag. Taking the Kahiwag's empire for themselves, the Gros expanded through their sector, absorbing smaller empires into their own and turning them into their own slaves. The Stratocracy's presence outside of Exterioris remained unknown for over a thousand years, having no interactions with the Confederation of Andromeda other than rumours of each other's existences. After all these years, the Gros started to explore other galaxies as well.

The Gros were present during the Asgord Genocide, where they considered the Asgords of the Friendly Republic of the Asgord incredibly easy to conquer. During this time, the Gros also found and allied with the United Lanat Empire. After enslaved the population of about 3 entire planets, the Gros left the Kraw Galaxy, not before leaving the Kraw especially annoyed. During the Annihilation, the Gros were saved alongside the rest of Andromeda. After some moths, they manage to recover their losses.

The Gros' next action after years would be returning to the Kraw Galaxy once again to launch a new attack on the revived FRA, this time with the intention of totally eradicating it. Establishing a forward base in the form of a space station in hidden territory, the Gros launched their attack. This time, however, the Gros met resistance in the form of the Kraw who risked themselves to protect the FRA. The Gros would then cause the destruction of several Kraw Empire planets and the death of billions.

The Gros were eventually defeated, however, when the Tyrek Dominion attacked their base and surrended Commandant Kolger and his fleet. The fleet was spared and the Kraw attempted to use them against the Brood of War, however the Gros turned on the Kraw and escaped the galaxy, leaving the Kraw fleet to die alone.

During the course of the New Dawn, the Stratocracy began plotting against the Andromedan Galactic Commonwealth, thinking it as unworthy of being rulers of the galaxy. To do so, the Gros began creating links with powerful organizations such as the the Brotherhood, the Khaxvis Resurgence and Blackforge. This would backfire, however, when the current Grand Admiral Gnorvi was descended by Volkarus Khaxvis, which attracted the Corruptus demon Varugr into their territory. Varugr took over Gnorvi and turned him and Commandant Kolger into servants, and began exploring the Streatocracy's links and secrts for his own intentions.

The Gros and the Brotherhood began working together to develop the superweapon known as Project Adaru. However, following an attack on Karnagtah by the members of the New Dawn, the Gros broke their alliance with the Brotherhood, blaming them for the attack. The Brotherhood retaliated by unleashing Project Adaru on the Stratocracy, destroying it. As an emergency measure, Varugr ordered Ocularivs to swarm into Gros worlds, take them over and transport them to the Dominion of the Xhodocto. Meanwhile, other Gros managed to escape both the Brotherhood and the Xhodocto Dominion, taking residence at the Andromedan Galactic Commonwealth and becoming sub-citizens. With the Stratocracy destroyed, most Gros now wish to be forgotten. The fate of their slaves and their Kordalu Zazane allies remain unknown.

The Stratocracy of Karnagtah, as its name stated, was a stratocracy, a government controlled by the military. The highest authority of the empire was known as the Grand Admiral, which served as the equivalent of an emperor and led for all of his lifespan, only to be replaced by a new one on death. This emperor-by-another-name was advised by numbers of Admirals who also served as sector governors, with individual star systems and planes being under the rule of Delegates. The slave races of the Stratocracy had no say on the government and no representing individuals in it whatsoever. The last Grand Admiral of the stratocracy was:

Because the state was ruled by the military, their culture was based around the idea of domination and security. The Stratocracy was an extremely strict and controlled empire, upholding order above anything else. To achieve this, the Stratocracy actively exterminated criminals on sight in a similar fashion to the Indoctrinate Collective, except the Stratocracy's death sentences were far more dreaded. However, the Stratocracy made extensive use of bounty hunters or space pirates when they see it as profitable. Slaves had absolutely no rights in the Stratocracy and were seen as property shared between all citizens, meaning any citizen from any age, species or wealth had the right to tell a slave what to do. It also meant no citizen "owned" a certain slave.

The Stratocracy lived in large cities built in two parts: citizen districts and slave districts. Citizen districts were vast cities of silver-looking buildings, with extremely tall skyscrapers where the citizens lived, and patrolled by robotic drones and soldiers daily. The slave districts, however, were located underground, with little living conditions, and only robotic guards keeping the slaves in check. However, it should be noted that not all citizens were so slave-rampant. This trait was actually centered across the territory surrounding Karnagtah itself. On more distant colonies where it was not so heavily controlled, the colonists had developed indifference toward slaves and saw them merely as poor citizens. However, freeing a slave was considered a grave crime in the Stratocracy, meaning these colonists could not help these slaves escape, even if they developed a liking for them.

The technology of the Stratocracy of Karnagtah was never studied in depth by other races of Andromeda, but what was seen of them has been compared to that of the Terran concept of a Tier 3 empire, more advanced than the younger races of the galaxy but ultimately inferior to the Galactic Commonwealth. It is widely agreed that the Stratocracy never stood a chance against it.

The Gros did not have the concept of worshipping a deity, and because of this, the Stratocracy was mainly an atheist empire. However, they were known to worship the original Grand Admiral founder of the Stratocracy, the Gros named Koawrar Vokarion, as a legendary hero. Because of this, the Grand Admiral of the Stratocracy was always seen and referred to as a figure to be respected. However, when it came to religions involving the worshipping of deities, the Gros were atheists, with traits of antitheism. Their "weak serve the strong, strong serve us" mindset made them against the idea of a higher being than themselves. Other citizen races were allowed free religion, as long as the Gros were not affected by it. 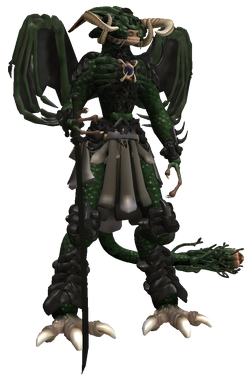 “You failed me, you insects.”

Varugr Kriese is a Zazane servant of Shu'wokerama who served as the real mastermind behind the Stratocracy of Karnagtah. He planned to use it to fulfill his plans, and used Admiral Gnorvi's body as a puppet to interact with other Gros without exposing himself. His plans, however, failed and he instead forced the Gros to join the Xhodocto Dominion as punishment. 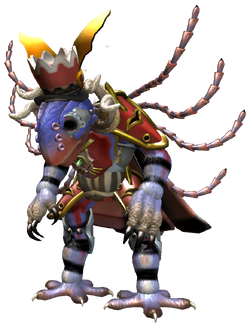 “Bow to our presence, weakling.”

Grand Admiral Gnorvi was the final leader of the Stratocracy of Karnagtah. An old warlord of considerable power, Gnorvi seized the throne of the Gros by force. Very expansionist, he seeked to make the Gros known and feared across all of Andromeda. He was eventually killed by Varugr and his body was completely destroyed alongside the rest of Karnagtah. 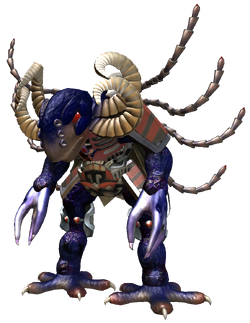 Commandant Kolger is Varugr's personal assistant and formerly the highest military commandant of the Stratocracy of Karnagtah, having complete control over its military and serving as Varugr's personal enforcer. Created in a laboratory to serve as a supersoldier, Kolger leads the Dominion Gros' forces into war and conquest, being famous for his campaigns against the Kraw Galaxy.

“We shall fight together to exterminate all weaklings.”

“It's either death or servitude. Make your choice.”

“We shall honour our agreement, I swear it... together, we shall rule.”