A Star Destroyer is a type of warship characterised by its long and pointed, usually dagger-shaped, hull. In the narrowest sense, "Star Destroyer" refers to ships filling a particular role, primarily ship-to-ship and space-to-ground combat with limited carrier and troop transport capacity, typically between one and three kilometres in length. In the broader sense, Star Destroyers include any vessel that utilises a dagger-like shape for the same purposes, from smaller frigates such as the Acclamator-class troop transport to Star Battlecruisers, between three and eight kilometres in length, and larger Star Dreadnoughts or "Super Star Destroyers" such as the Executor-class command ship.

The main purpose of this shape is so that firepower can be both delivered in powerful broadsides and focused beyond the front of the vessel, at the cost of having a less defended rear. Star Destroyers are mostly associated with the starfleets of the Cyrandia Cluster, although they are used throughout the Gigaquadrant.

Befitting for the galaxy most associated with the Star Destroyer design, some of the earliest known vessels of the type were from the Cyrannus Galaxy, where the Phaedric Empire used them in their wars against the First Republic from the 46th to 24th millennia BNE. However, there is no sign of continuity between these and later ship classes. Cyrandia-type Star Destroyers are also present in parallel universes, such as the Aretenus-class of the Gigaquadrantic Hegemony.

The modern Star Destroyers of Cyrannus trace their roots back to the Cavaneu, who used them from at least their war against the Basileus in 10640 BNE, and the closely related Tenerensis in the 6th millennium BNE. Later, the Capricorn-class was deployed by the Capricorn Sector Alliance.

Apparently independently, the Lizardians of the Quadrant Galaxies developed Star Destroyers some time prior to the formation of the Imperial Alliance in 10 BQF. After seeing their effectiveness in the Second Galactic War of 0 BQF, the United Republic of Cyrannus began work on new Star Destroyers, which led to the deployment of seven different classes based on the design, including the iconic Venator-class and the first "Super Star Destroyer" in the form of the Mandator-class Star Dreadnought. Shortly afterwards, Rambo Nation introduced the Acclamator-class, the Orodreth-class, and the Caradhras-class Assault Carrier.

The beginning of the Great Cyrannus War in 3 BNE saw the introduction of the first Star Battlecruisers, the Procurator-class, which were designed to be intermediate in size between Star Destroyers and Star Dreadnoughts. In 1 BNE, the New Basileus Empire introduced the Basileus-class Star Destroyer in order to match the Republic's Venator-class. Both of the Republic's successors, the Galactic Empire of Cyrannus and New Cyrannian Republic, have continued the development of Star Destroyers, Battlecruisers and Dreadnoughts, with one of the most ubiquitous varieties being the Empire's Imperator-class Star Destroyers. Following their lead, in 12 AQF Rambo Nation upgraded the Caradhras-class to the size of a medium Star Battlecruiser, and in 20 AQF deployed the Paragavatus-class Star Dreadnought.

In one future timeline, by the 13th century NE the Star Destroyer had evolved into the smaller Apollo-class used by the Republic, while the Empire had replaced them entirely.

The Jovar Empire developed a variety of Star Destroyers remarkably similar to Cyrannian designs. Strictly speaking, Jovar Star Destroyers only came in two classes, the Ardent and Imperator, with the Dreadnaught, Immobilizer, and Terrorizer being smaller ships of similar design, and the Earthbound-class being a large Star Dreadnought. When the Jovar Empire split into the Joran Planet Alliance and Jovar Socialist Republic, both states only maintained one class of Star Destroyer each, the Allecto and Defender classes respectively. The Alliance also fielded the larger Reliance-class Star Cruiser and Tachyon-class Star Dreadnought, before both they and the Republic were destroyed in the New Grox Wars.

The Delpha Coalition of Planets fields the Monitor-class Star Destroyer, which mainly functions as a transport or escort ship, while the Star-class Dreadnought possesses a front similarly pointed to that of a Star Destroyer but much thicker.

Native to Milky Way's satellite Girdo, the Girdo Empire used the Imperium-class capital ship, an elongated pyramid-shaped variant of the Star Destroyer concept, from the 2750s onwards. The same design is still used by Apalos.

During the New Grox Wars, the Grox Empire was inspired by the largest vessels of the DCP and Girdo Empire to develop their own class of Super Star Destroyer.

Seemingly by coincidence, the Defensive Systems Bloc's own destroyers, of the traditional role of fast, maneuverable long-endurance warships intended to escort larger vessels, have distinct dagger shapes like other civilisations' destroyers rather than the DSB's traditional bulbous designs.

The earliest known Star Destroyer was the Vyronicia Star Destroyer, created by the Taldar Empire as part of the Vyronica Fleet. It has been theorised that these inspired the development of Star Destroyers by later civilisations. The Vyronicia Fleet was later used by the Blyro'Tralzica in the Great Blyro War between 2310 and 2324, before being passed on to the Unified Nation of Ottzello in the 2780s during the Coming of the Vague, and their successors the Union Republic of Ottzello during the War of the Ancient Three.

In Mirus, one of the native powers there, Unified Federation, would utilize their own Star Destroyers, based on designs by their Creators and Karpine engineers. The Star Destroyers, would come to be a controversial note in Federation history, many viewing them as a sign of the Federation growing too powerful and too reliant on its military. The Exalted-Class Star Destroyer would become their strongest vessel, given the most cutting edge weapons the Federation had, and guided by an advanced Aurora-class AI unit on board to advise the captain and guide crew functions. Any criticisms were quieted after the first three Exalted-class Cruisers managed to blunt the assaults of many fearsome enemies of the Federation.

“There is only so much diplomacy can do. Some situations call for a giant Star Destroyer.”

- Grand Mandator Deoclet Caesarius of the Galactic Empire of Cyrannus 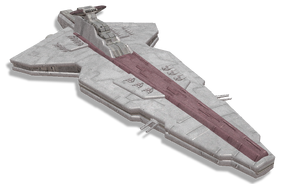 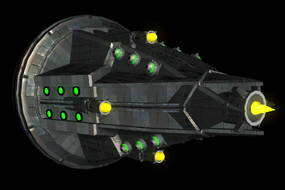 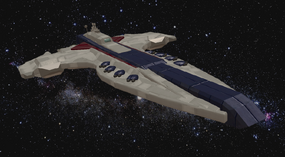 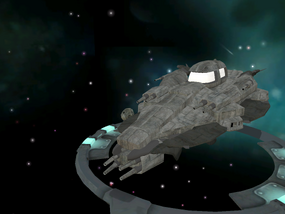 Retrieved from "https://spore.fandom.com/wiki/Fiction:Star_Destroyer?oldid=810162"
Community content is available under CC-BY-SA unless otherwise noted.