“It becomes increasingly difficult to consider the Kingusian people cut from the same cloth as their Dracogonarious masters; a proud people driven deeply by value of their identity, their will retaining no bounds to tie them down beyond their adoptive progenitor-kinfolk. One must suspect what may have become should they had been abandoned and allowed to mature and grow in the absence of their extraterrestrial parentage - and the devastation their pride would have driven them to.”

The Spinkers, called by themselves Kingusians, are a species of shark-like reptilians of vaguely draconic build native of Planet Kingus in the Milky Way Galaxy. A proud and somewhat aggressive people, the Spinkers are creations of the Dracogonarious who bioengineered their ancestors and guided them into space, with the two species sharing much of their genetic codes. Militaristic and eager for combat, the Spinkers are one of the founders and most influential races of the Indoctrinate Collective.

While generally friendly, the Spinkers are known for being stubborn and sometimes intolerant creatures, with their near universal hatred for religious races being a staple of their culture. They are warmongers by nature and feel great pleasure in the defeat of anyone who may wrong them, though these traits have somewhat lessened with time and today they live in the company of dozens of other races. Some more extremist Spinkers have fled to the Vengeful Claw in order to not be subject to the Collective's peace-imposing government, but nonetheless, the Spinkers remain a very important species in the Milky Way, holding great influence in Gigaquadrantic affairs.

The Spinkers were originally a species of aquatic insectoids creatures native of Planet Kingus. Thousands of years ago, the Dracogonarious Empire arrived on the planet and decided to make biomodifications on the Spinkers' DNA structure, changing them into what they are now. After the Dracogonarious left the planet and left the Spinkers to evolve by themselves, they eventually achieved sentience and united their planet through war. The empire of the Spinkers evolved fast and violently through their home sector, dominating and destroying other races on their path. At the time, the Spinkers were led by the dictator called Thomikas Spinkarius, who believed the species deserved the territory they were claiming. This eventually ended in the "Battle of the 40 Stars", where the Spinkers were crippled by the Ernai Empire and Windey Spinkarius took over the government. 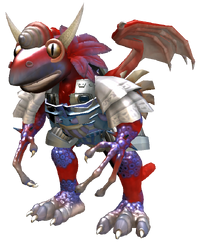 Spinkers are red dragon-like creatures. They share much in of common with the Dracogonarious, thanks to the bioengineering they were created from, and as such, share some traits such as reptilian structure, large wings, red colouration and large claws. However, they possess various differences. Spinker skin is more lean and clean and has a deeper shade of red, and their heads are more pointed and shark-like, as opposed to the Dracogonarious' crocodilian build. Spinkers possess three rows of sharp, pointed teeth, with an average of sixty teeth present on their mouths at all times. They continually shed their teeth, and due to their very long lifespan, some Spinkers can shed over one million teeth over the course of their entire lives.

Spinkers are, naturally, aggressive creatures. Evolving from very predatory descendants, the Spinkers' society has always been based on the idea of the strongest being in charge and leading through intimidation. While this changed with the coming of Empress Windey Spinkarius, the species still retains a degree of bloodthirst. However, despite this aggression, Spinkers are fiercely loyal to their allies, especially the Dracogonarious, who they see as the responsible for allowing them to travel through the cosmos.

Spinkers are physically superior to both humans and Dracogonarious, displaying around three times the arm strength of a human adult. They can use their wings to fly and can resist hot temperatures without needing to drink water for extended periods of time. Spinkers are also poisonous creatures, capable to spit orbs of venom from their organs at their foreheads. This venom is capable to cause third-degree burns on less resilient species and intense disconfort on others. 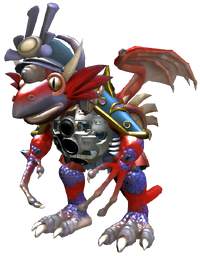 Koluap is by far the most famous Spinker in the galactic community, famous for being one of the Royal Admirals of the Indoctrinate Collective, for ending the Battle of the 40 Stars and for being under extremely dangerous situations, such as facing Shu'rimrodir up-front or exploring a Xhodocto Vault. Koluap is notable for spending most of his life suffering from insanity due to a spaceship crash, though this has eventually died out following his retirement from the military. 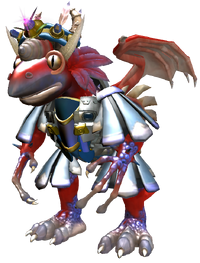 “Guess where mindless violence leads you to? Death. That's where.”

Windey Spinkarius is Koluap's wife and the second and last ruler of the Spinker Empire prior to it becoming the Indoctrinate Collective. A woman of strong values who believes in the concepts of diplomacy, Windey allowed the Spinkers to expand more than her father ever did. She currently serves as a Supreme Advisor of the Collective. 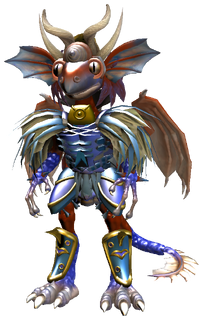 “I will make my predecessors proud.”

“Your species is a perfect contender for the next mass sacrifice; imperfection runs deep into your history.”

“They may not be as strong as us in strength, but they are in no way lesser to us.”

“Prideful, strong, not shy of their instincts, they remind me of my own kind in a way.”

“Brutish. But admirable. In a sense.” 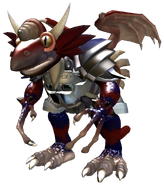 A Spinker corrupted by entropic energy 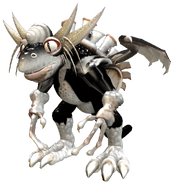 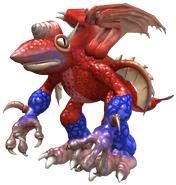 First model of the Spinker