Sector within the Endless Space of the Cyrandia Cluster

“A place of beauty, magic and wonder, origin of the evil and darkness known as Morgandaûr, and home to mysteries beyond imagination.”

The Space in Between, also known as the Corridor, is a region located within the Endless Space of the Cyrandia Cluster, between the Cyrannus Galaxy and the Quadrant Galaxies. The Corridor is one of the three ways to enter the Quadrants while travelling from Cyrannus, and vice versa, harbouring one of the three wormholes linking the inhabited regions of Cyrandia.

A realm of mystery, it is often said of the Space in Between that the rules which govern Cyrannus and the Quadrants are not quite the same within the endless systems, which are often characterised by a strong connection to mysterious energies, magicks and forces unknown to those elsewhere in Cyrandia. This has attracted many scholars in the past, such as the sages of the first Aldárae Order, and the mystical elves, both of which sought to understand the mysteries of this unusual region of space.

Historically the sector was remote for decades, until Rambo Nation discovered its location and allied the elves of Carnthedain. Upon the signing of the Nim-Glaré Concordat, the Space in Between fell under the authority of the Galactic Empire of Cyrannus, which constructed various outposts to keep the Corridor trade route safe. The Corridor itself a free passage amidst the anomalies which pervade space between the galaxies of the Cyrandia Cluster, and is the only extragalactic region close to Cyrannus and the Quadrants that is unaffected by the galactic barriers, created by the Oikoumene and Atlantica, surrounding it.

Much like the rest of the Cyrandia Cluster, the origins of the Space in Between are shrouded in mystery, though it can be assumed that, given its name, it has existed for as long as Cyrannus and the Quadrants have existed. Indeed, Space in Between is believed to be the only extragalactic region of the Cluster that is safe for travellers, though 'safe' is a relative term when faced with the deadly anomalies in the region. A place of strong magicks and unusual civilisations, it is known to modern historians that the first Aldárae Order were among the first to explore the region, establishing various temples and outposts to study and learn from the mysteries of the heavens. Archives found on Aldár tell that the ancient Aldárae believed that the Space in Between was the purest region in the cosmos, filled with the glory of the gods and blessed by the guiding Light.

However, the region was also the birthplace of great evil and darkness. From the verdant planet of Carnthedain, the evil sorcerer Morgandaûr spread his dark reach across the heavens, with goblins and orcs marching under his banner. Meanwhile, the elves of the region grew in power and grace, establishing great and beautiful cities, which they swore to protect against the dark influence of Morgandaûr, dragons and other dark forces. Eventually, the region was happened upon by Rambo Nation, which made an alliance with the elves of Carnthedain and began exploring the Space in Between with greater frequency, charting a wormhole connecting the Quadrants and Cyrannus used by the first Aldárae Order in ages past.

With the rise of the Galactic Empire of Cyrannus, the region fell under the baleful glare of the Oikoumene Dark Emperor Tyrómairon, who sought to expand his dominion over all within the Cluster. To accomplish this, the Dark Lord established outposts throughout the region, to protect vital supply lines in the Quadrants and to uncover dark artifacts and acolytes to further his plans. With the outbreak of the Second Great Cyrannus War, many within the Cyrandia Resistance have begun to explore the Space in Between—a place where those who wish to become invisible can easily dwell. The Rambo Loyalist resistance and Legatus Finduilica forces clashed in the month January of 2820 (22AQF) over Isle Blue. After the battle, the Space in Between fell into hands of Legatus control once more.

The Space in Between hosts a diversity of planets and native inhabitants, though also harbours species which originated from other regions within the Cyrandia Cluster. Most of the Space in Between is devoid of life, due to the constant presence of the dangerous and often lethal anomalies. Marking the area with a high amount of scientific celestials for study. Though rather isolated from the rest of the First Gigaquadrant, it does have active wormhole connection to the Quadrant Galaxies and the Cyrannus Galaxy and is often seen as a place where you can escape the everlasting watch of the Imperial and Rambo authorities. It also seemed to have housed the presence of the original Aldárae Order before it went defunct. The Space in Between directly borders the Finduila Sector.

Major and influential states within the Space in Between include the Legatus, while minor and more local states include Ordinis Sancti of Calcutta. 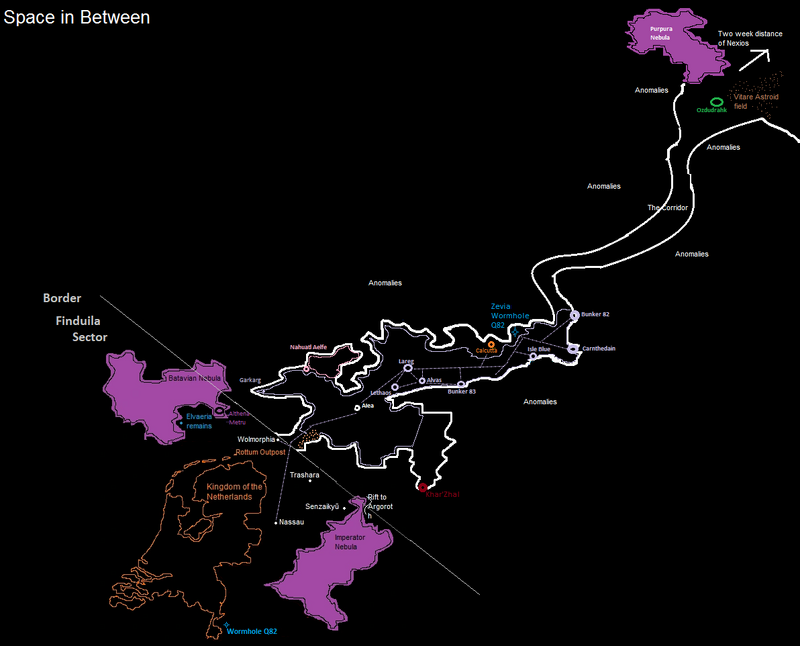 A map of the Space in Between and the Finduila Sector

The Space in Between features various planets, home to a variety of species and nations with each its own climate, wildlife and alignments.

Retrieved from "https://spore.fandom.com/wiki/Fiction:Space_in_Between?oldid=858224"
Community content is available under CC-BY-SA unless otherwise noted.