Sinistaria is the Duke of Terra Desaria and upsurper of House Barask. A cunning, calculating and elderly humanoid, Sinistaria dreams of uniting the human planets behind his banners so the Humanoid Empire could be reborn once more. Sinistaria loves to plot, never hesistating to remove those who are in his way.

Sinistaria was born in 56 BQF at Terra Desaria in a noble house. During his childhood, he was prepared to become a knight like his father and his father before him. Eventually Sinistaria became the Arena Master of Terra Deseria, where summoners and trainers could use their Scions against his to earn the skill token of Terra Deseria. Sinistaria disliked losing, so instead made it a more of a game after he caught a Rhidor, instead of combat the two trainers stand on a plateau and each trainer has to use it's Scion to push the other of to win the match. In 0 BQF, as the Second Galactic War plunged the Quadrant Galaxies into chaos, Sinistaria used his cunning to overthrow House Barask and named himself the Duke of Terra Deseria. Ever since, Sinistaria has been plotting and researching for ways to increase his power so he could unite the humanoid planets behind his banners, allowing the rebirth of the once promising humanoid empire.

During the 10th month of 07 AQF, Sinistaria aligned himself with the re-formed Syndicate and became one of its slavers.

Sinistaria is a calculating, cunning and intelligent human. Though elderly and not as strong as he used to be, his keen political insights and authority make him the most powerful men on Terra Deseria. Sinistaria is often described as cruel and mean as he desposes of anyone who stands in his way. He is a gifted Scion trainer though.

Sinistaria has the following Scions:

Catscion, a Scion he uses as personal pet 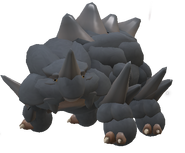 Rhidor, the Scion he uses most during Arena battles
Add a photo to this gallery

“Useful and loyal to my cause!”

“I guess we can cooperate”

“You shall be destroyed!”

Retrieved from "https://spore.fandom.com/wiki/Fiction:Sinistaria?oldid=667268"
Community content is available under CC-BY-SA unless otherwise noted.