The Simhaslaeo Province is the most sparsely-populated province of the Gigaquadrantic Hegemony, with the entire Simhaslaeo Galaxy as its official territory, but a population consisting of a mere 200 trillion individuals across 100,800 inhabited systems.

As a successor to the Zuckhs Empire, Simhaslaeo is officially a theocracy led by a Pharaoh, but the Hegemony's influence has limited the religious nature of the leadership so that it is a de facto Zuckhs-ruled aristocracy.

Little is known about the ancient history of the Simhaslaeo Galaxy, as any native species were apparently annihilated when the Neraida Gigamatrix settled in Simhaslaeo after having fled the Cyrannus Galaxy in 76 BHR. When a Hegemony fleet arrived in 10 087 HR, the Neraida began to refocus their effors on their old enemies, who themselves were determined to destroy the Neraida once and for all, and space was opened up for new inhabitants.

In the 16 160 BR, the Girdo Galaxy fell under the control of the Apalarchy. Many inhabitants of the galaxy fled to Simhaslaeo, where they were forced to remain in hiding from the Neraida. Over the next three millennia, two species that had happened to settle sufficiently far from Neraida space built up large empires, accumulating vast reserves of mineral wealth by sending automated asteroid mining operations to distant star systems: the Zuckhs, theocratic warriors or knights with its capital at Noph, and the Tsajaginykar, a confederation of traders and economically influential planet-states, of which the most influential was Tjenu.

After many Neraida-Hegemony battles, both civilisations would send starships to investigate the wreckage of Hegemony ships, to bring back samples of technology for analysis and Hegemony personnel for questioning. From this, they discovered that the Hegemony would attempt to annex their empires after defeating the Neraida. Not wanting to deal with a war, the Zuckhs decided to take advantage of the situation by focusing on their economic development, with the intent of willingly joining the Hegemony and getting the best possible deal out of it. When the Neraida were finally destroyed in 19 597 HR, the Zuckhs Empire contacted the Hegemony and accepted annexation.

The Hegemony gladly gave the Zuckhs control over the Simhaslaeo Galaxy as the newly-named Simhaslaeo Province. In return, the Zuckhs used their economic power to purchase tens of thousands of outdated and heavily-damaged warships for their fleet, which they then set to work on repairing and upgrading. Many Tsajaginykar worlds willingly sided with the Zuckhs, including Tjenu. However, the majority chose to fight against outside interference. The Simhaslaeo Province made full use of its new fleet to quickly conquer the rebel strongholds and enslave any survivors who still refused to submit to Zuckhs rule.

The Zuckhs are feathered herbivorous mammalian humanoids, based on the planet Noph. They built a large colonial empire in Simhaslaeo before the arrival of the Hegemony, setting themselves up as a ruling species. Each Zuckhs is given shining armour and shielding after hatching, and upon reaching adulthood, they are further gifted with additional technological items which are used to keep unruly members of other species under control via mind control and trickery. Ultimately, the aim of this is to make the Zuckhs appear to be in possession of magical powers, maintaining their religious control as well as providing physical protection.

The Tsakaginykar are two-armed quadripedal carnivorous reptilians, based on the planet Tjenu. They are the diplomatic species of the Simhaslaeo Province, responsible for maintaining relations with the rest of the Hegemony. Although originally vicious predators, the Tsakaginykar eventually developed into a spacefaring confederation of traders and merchants, with influence spreading across the whole of Simhaslaeo. 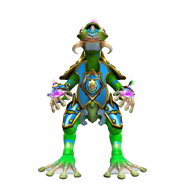 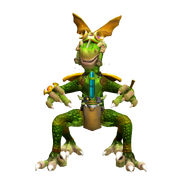 Tsajaginykar
Add a photo to this gallery

The Simhaslaeo Province inherited the political structure of the Zuckhs Empire, with a priestly Zuckhs aristocracy led by a Pharaoh. Other species occupy lower levels in society, being divided into several castes. For example, the Tsajaginykar occupy a diplomatic position in society, with castes including ambassadors, political scientists, economists and (for the descendants of those Tsajaginykar that opposed the Hegemony) embassy servants. Mobility and marriage between castes is legally possible, but practically unachievable, while becoming part of a caste dedicated to another species is completely forbidden.

The government itself is composed of the Zuckhs castes. The pharaonic caste is the ultimate ruling authority, consisting of the Pharoah himself, his second-in-command the Vizier, the Nomarchs (leaders of individual star systems), and their large extended families. The day-to-day running of the Province is controlled by the bureaucratic caste, while loyalty and authority are maintained by the priestly and military castes.

Crime is punished harshly by the military caste, usually with instant execution. While Simhaslaeo operates an "innocent until proven guilty" policy, omnipresent surveillance means that they consider trials to be unnecessary, as any criminal activity or plotting against the Zuckhs aristocracy within the Province's settlements will be immediately discovered. Meanwhile, travel to areas without surveillance is heavily restricted, and individuals who do leave the web of sensor foglets are monitored at all times.

The Simhaslaeo's portion of the Hegemony Navy contains around forty million warships. These are, however, all obsolete designs that the Province purchased from other parts of the Hegemony; while they have all been refitted and have all of the most up-to-date technology, they are on average inferior in combat to modern designs.

In particular, the most prevalent ships of the Province's fleet are the Imperial and Venator classes of Star Destroyer, being the two most commonly used during the Great War. Meanwhile, the pride of Simhaslaeo's fleets are the Nemesis-class Star Dreadnoughts, which are used to defend the most important worlds such as Noph and Tjenu. The lesser but more numerous Assertor, Bellator, Executor and Mandator classes guard other important systems, while for the majority of worlds, their greatest defences are their dedicated Star Destroyer flotillas.

- May forever reign the Hegemony!

- He who is not for us is against us.

- You are not even worthy to be spat upon.

“We kept your secrets Holy Pharaoh... and others'.”

Retrieved from "https://spore.fandom.com/wiki/Fiction:Simhaslaeo_Province?oldid=752740"
Community content is available under CC-BY-SA unless otherwise noted.