Fear that which you will never understand.

High Demon of the Corruptus

“THE SCUM, WHO HIDES IN THE DARK
IT HIDES IN OUR SHADOWS, DEVOURS OUR SOULS
IT LAUGHS AT OUR FEAR, FEEDS ON OUR DESPAIR
IT BEGETS DOOM AND RENDS US APART
IT WILL NEVER END''”

Shu'ytrogarva (Vida'Rra: That Which Terrorizes) is an incredibly ancient and powerful entity who serves as the third authority of the Corruptus and as the leader of the Garvathae demon race. One of the very first nightmare demons to be created and one of the most powerful, Shu'ytrogarva exists to be an instrument of fear in servitude of Shu'rimrodir, plaguing the dreams and destroying the hope of those who oppose the black fog of his master, displaying cold efficiency in these actions and causing entire civilizations to dread the very mention of his name.

As one of the four high demons of the Corruptus pantheon, Shu'ytrogarva is among the most powerful entropic lifeforms in reality, having such power to be considered a deity of his own right by others. Nearly emotionless and with a complete lack of empathy for mortals, Shu'ytrogarva is among the most dangerous demons not just because of his great power, but also because of his immense intellect and influence over the psychological side of his enemies. Few would dare stand before the Corruptus' most dreaded lord, and even fewer dared stand and survived to tell the tale.

Shu'ytrogarva dates from nine billion years ago, following Shu'rimrodir's rise after he was descended by Diafthora. His exact origins are unknown, but he is widely assumed to have been the very first member of the Garvathae race to be created, being given immense power by Shu'rimrodir in order to lead the rest of his lesser servants. Shu'ytrogarva's first major act in the universe was to wage war on the Vida'Rra in an attempt to conquer the ancient Milky Way Galaxy, leading to the deaths of billions in the process and to teach the Dream Energy lifeforms the concept of fear through the use of terrible nightmares and night terrors. However, after thousands of years of war, Shu'ytrogarva was defeated by the fabled hero Rhigeo Fuerq after he was frozen alive in a Dream Energy prison and sent to the depths of space, where he remained imprisoned for the next nine billion years. Unlike Shu'wokerama, Shu'ytrogarva is believed to have become completely dormant during the whole period.

Shu'ytrogarva was freed from his prison by Arrtkar Crowart an indeterminate time before the Second War of Black Fog. During the war itself, Shu'ytrogarva remained in the shadows, antagonizing the Dracogonarious Empire and its allies through the use of horrible, morale-breaking nightmares which hit the dreams of certain individuals such as Apollo, Herquie, Old Fang, Tyraz and Zr'Ahgloth. Shu'ytrogarva was more physically active during the war following the death of Corruptus Overworlds, where he led the demon legions of the Corruptus through the Milky Way alongside the Marinoxidiz, ultimately leading a charge into the Kicath Empire for the purpose of destroying it.

When the Dracogonarious Empire and its allies came to the aid of the Kicath, Shu'ytrogarva confronted Jerkon, Koluap, Herquie, Kithworto, Keldar and Sesoka, trapping them in a nightmare but leaving himself exposed in the process. The combined effort of the group was enough to slay the Nightmare God, saving the Kicath Empire of his rampage and causing the disappearance of the Garvathae of the Corruptus, considerably weakening the demonic faction. After Shu'rimrodir was brought back by the Xhodocto, Shu'ytrogarva was revived by him, and aided the Legion in destroying the multiverse during the events of the Annihilation.

Shu'ytrogarva was the leader of the invasion in the Realm of Dreams during the Third Xhodocto War. Following the death of Macin Xermilin, Sonhadromerith was distracted for a split second. This was enough time for Shu'ytrogarva to attack and strike at the Dream God, shattering his body into pieces. Ordering the Realm to be consumed by the Nightmare Region again, Shu'ytrogarva then began studying ways to safely mix Dream and Nightmare Energies so he could master both and replace Sonhadromerith as the Realm's avatar. To aid him, Shu'ytrogarva created an army of "dreamy" shades creating of the Onuris team to act as his guards, as well as obtained the service of Mordathai, Murangon Nal and Geltastra.

Shu'ytrogarva engaged the team in combat and at first showed him to be completely invincible even against Agent Nu's Chaos Energy. However, the team eventually had the idea of harming the Realm itself, weakening Shu'ytrogarva and freed Dreamy Hachi by breaking the demon's heart. Dreamy Hachi sacrificed himself to give the team reality warping powers, making them in equal terms with Shu'ytrogarva, and engaged him in battle. Eventually, the team used their powers to revive Sonhadromerith, who emerged out of Shu'ytrogarva's body with his power restored, and then proceed to crash the demon into the floor and break his body apart. Shu'ytrogarva was last seen when the team returned to their ship, being taken back to the Onuris Universe with them. Too weakened to move, Shu'ytrogarva warned the team to not underestimate the Dominion, as his defeat was a "mere setback". Following this, Shu'ytrogarva finally passed away, his energy burning away and reducing him to a skeleton.

Not too much longer later, though, Shu'ytrogarva would be resurrected by Shu'wokerama during the Cataclysm in the Neutral Zone through the use of the remaining energies of the Corruptus Overworld Brezank. Following his rebirth, Shu'ytrogarva returned to the Dominion of the Xhodocto to await for new orders, retaining his new form obtained during the Realm of Dreams but losing his power over Dream Energy.

As of currently, Shu'ytrogarva appears as a wraith-like Garvathae of usually great size, though he is known to be able to change his height at will. His head is decorated with several rows of curved horns, while spikes grow out of his back all the way to the end of his body, which is composed of many writhing tentacles. Shu'ytrogarva's immense, bony arms are much larger and more disproportionate than those of a normal Garvathae, and his bony fingers are nearly as long and sharp as his entire head. A pair of large spiked tentacles is often seen hanging from his back.

Unlike the other demons of the Corruptus, who are notorious for their foul temperaments and visible hatred for all mortals, Shu'ytrogarva is cold, quiet and collected. While he displays disdain for mortalkind much like all of his kin, he never makes these thoughts apparent as he maintains a stoic stance in nearly any situation. Even during the time he became more powerful than his master by obtaining Dream Energy, Shu'ytrogarva remained with an air of indifference and reacted to his following death with mild annoyance at best. Shu'ytrogarva lack of emotion is considered one of his most dangerous traits, for it is extremely difficult to determinate what he is planning or how he is feeling. However, it is certain that he shows a gleeful sadism in the haunting of mortals' dreams, one of the few occasions where he is seen emoting.

Shu'ytrogarva's power over entropic energy is considered godlike and is surpassed only by Shu'rimrodir and Shu'wokerama, allowing the demon to alter reality to fit his needs with little difficulty. Between the four high demons, he is considered the most nimble and agile while also the least resilient, though considering his sheer power, he is still more resistant to damage than any other lesser demon in the Corruptus. Shu'ytrogarva fights through the use of fast, focused blows on his enemies' weakest points, using his bone-made blades and tentacles as weapons which have been seen cutting through most, if not all known alloys. Shu'ytrogarva also invades the dreams of individuals in order to break their morale and, in most extreme cases, rend them completely mad through terror.

“The Master's will is to be fulfilled.”

“The black fog is to be spread.”

“Your dreams are my plaything.”

“My blades thirsts for your blood.”

“Nightmares do not last forever. Try as you might, I will not be swayed by them.”

“They say it is always darkest before the dawn. If so then the harder you torment me the more determined I shall become.”

“The dreaded dreams of the Assassin tell those that witness upon them of their deemed fate: tormenting demise and the unfairest of destinies, accursed nightmares of untimely conclusion. The most truthful prophets teach not their followers of hope... but of the truth granted unto them.”

“Hmph, no punk or whatever illusions he can conjure up will convince me to give in to my fears. True, the Assassin and his cronies will haunt and stalk your dreams, but then cowards will always hide behind others to do their work for them.” 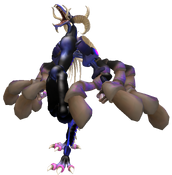 Shu'ytrogarva after being infused in Chaos 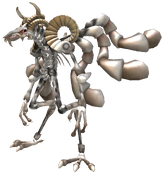