High Nightmare of the Corruptus

“UNFATHOMABLE
A MASS OF CHAOS AND NIGHTMARES
A MONSTROSITY WHICH LINGERS THROUGH THE VOID
WITH ONE BITE, AN ENTIRE WORLD DIES
WE ARE BUT VERMIN AS WE BEAR WITNESS
IT WILL NEVER END''”

Shu'suvreca (Vida'Rra: That Which Lingers) is a Shu'olerthae who acts as the third of the divine hierarchy of the Corruptus. The greatest of the Shu'lorangar, Shu'suvreca is famed as a mythical abomination who devours entire planets in a single bite. And these are not mere legends, for his colossal size, greater than whole worlds, make him among one of the most feared of all demonkind.

Devoting the entirely of his existence to serve Shu'rimrodir's interests, Shu'suvreca is a destroyer with no empathy for mortalkind, breeding billions upon billions of demons every day to increase the Corruptsu' armies. That Which Lingers is a force to be reckoned with, for when he is able to devour entire planets in seconds, only the most powerful civilizations in the universe stand a chance against him.

Shu'suvreca's origins trace back to the thousands of years prior to the War of Black Fog. Created as the first Shu'lorangar, Shu'suvreca was tasked by Shu'rimrodir to destroy and devour the Vida'Rra shortly after his creator. Alongside Shu'wokerama and Shu'ytrogarva, Shu'suvreca caused tremendous amount of destruction through the proto-Milky Way Galaxy, being responsible for breeding more and more demons of the Corruptus the most planets he devoured whole. The Vida'Rra never managed to defeat Shu'suvreca, merely slow him down or stun him with their Dream Energy, and the monster's reign of terror only ended when the legendary hero Rhigeo Fuerq led an attack against him, freezing him in a Dream Energy prison and forcing him to become dormant.

Shu'suvreca was reawakened by Shu'wokerama in the years prior to the Second War of Black Fog, and as soon as he was given consciousness once more, he began breeding planets worth of demonic armies to prepare for the second coming of his master. Shu'suvreca took great glee in devouring the worlds of the Dracogonarious Empire and their allies, their inferior technology and lack of knowledge about entropic demons meaning they could do nothing to stop him. Shu'suvreca remained a prominent threat through the entire war, being backed away by demons and Marinoxidiz and leading to the deaths of billions of innocents, until he was finally put down and destroyed. To destroy him, the Delpha Coalition of Planets developed a special payload filled with nanomachines designed to feed off entropic energy, and this payload was then fed to Shu'suvreca, who proceeded to be devoured from inside out by the nanomachines.

The self-destruction of the Kondrakar Dominion and the birth of the Eternal Wound wormhole during the War of the Ancient Three led to Shu'suvreca being summoned to the Borealis Galaxy. Only the combined power of the Polar Crystal Alliance, their alien allies and the forces of the Realm of Dreams were able to push the Corruptus God back, wounding himself enough to send him back through the portal he emerged from. While the Eternal Wound remains to this day, Shu'suvreca is no longer able to freely travel through it due to the constant vigil of the Thoi'olerthae.

Shu'suvreca appears as an absolutely titanic Shu'lorangar. The Dracogonarious estimate his total size to be 80,000 kilometers from his forehead to his chin, and it is completely unknown how long his body is from head to tail. Shu'suvreca has numerous, equally titanic tentacles through his body which wave around as he moves through space, and he always leaves an entropic fog behind him, dense enough to engulf stars. His body is filled with immense holes from which Corruptus demons are bred, and the insides of his mouth are described as having 'an innumerable rows of teeth'. As the greatest of the Shu'olerthae, Shu'suvreca is estimated to be the closest creature to Shu'rimrodir's former true race, from before he was descended.

Between the god-leaders of the Corruptus, Shu'suvreca is the most passive one. Relatively sedentary for a demon, Shu'suvreca shrugs off attempts to annoy or anger him, and merely does his task as a planet destroyer. Despite this, he shows great sadistic traits, taking pleasure in the misfortune of his victims and seeing his enemies as little more than obstacles, and possibly as food for himself and his demon brood. Shu'suvreca wishes to see the universe engulfed in the black fog of his master, and will use the full extent of his power to ensure it to happen.

Shu'suvreca, as one of the demigods of the Corruptus, is among the most powerful entropic beings of reality. Technological superweapons do little to his hide, and he has been seen shrugging off antimatter torpedoes, monopole-enhanced explosives and "starbreaker" gravity wave guns. The only thing known to make him react to being attacked is Dream Energy, and even that requires immense quantities to pierce his body. Shu'suvreca's colossal tentacles can wrap themselves around planets and suck off their nutrients, and once that is done, Shu'suvreca will proceed to swallow the planet's remains and crush them on his numerous teeth. Sh'usuvreca can move at FTL speeds through teleportation, but unlike other smaller demons, he cannot do it instantly and requires several moments before being able to teleport to anywhere.

“The demon called "Shu'suvreca" is among the most... terrifying things I have ever seen in my life. There is always talk of "what would happen if an immovable object met an unstoppable force". Well, he is the closest to both of these I have ever seen.”

“A colossus that patrols the vacuum of space and devours entire worlds within its grasps. It is entities such as this that enforce the incomprehensibility of the universe, and make life seem so much more minute than it really is.”

“I tried doing some things with this guy once. Didn't work. Didn't want to play.”

“Like your masters, Krathazhrukhal will dispose of you once your use has ran out. What then, demon?”

“An essential part of this discordant tune; life is torn from its cosmic strains and devoured by the instrument.” 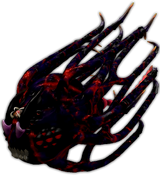 Shu'suvreca before being infused in Chaos