Master of the Corruptus
Essential God of Nightmare Energy

Shu'rimrodir (Vida'Rra: That Which Devours) is the first of the Shu'olerthae, the creator of the Corruptus and the Essential God of Nightmare Energy. Originally a non-sapient spaceborn organism, he was descended by one of the seven Xhodocto Eyes and turned into one of the most terrible demons of all, with an insatiable thirst for the conquest of the Onuris Universe and indeed, all of reality.

Representing decay and irreversibility, Shu'rimrodir haunts the minds of mortalkind through terrible nightmares and has as his ultimate goal the complete domination of all life, turning it all into servants and demons under his iron fist. Shu'rimrodir is a constant which cannot be removed, only slowed down, and even then, he is noted to come back stronger than before every time he is bested. Currently falling under the Dominion of the Xhodocto, the God of Nightmares is forever expanding his influence, awaiting for the next opportunity to induce terror in the hearts of aliens once again.

Shu'rimrodir was not initially a demonic entity. He came to be as a non-sapient, space-born organism who fed off star matter for sustenance. His original form was harmless and barely noticed by the ancient civilizations of the universe, including the Vida'Rra, who might even have studied the infant Shu'rimrodir. The primeval creature would eventually be attracted to an object which was not a star, but one of the seven Xhodocto Eyes, most specifically the one by the name of Diafthora. The creature attempted to feed off the Xhodocto Eye, and it is said that the demonic artifact was humoured by the creature's attempt and decided to empower it with tremendous power. Merging itself with Diafthora, the star eater became the first Shu'olerthae demon who eventually grew into the creature who would be known as Shu'rimrodir by the races of the universe.

Shu'rimrodir began breeding at an extremely fast rate, which led to the creation of the Corruptus and its demon races. Their bodies, now filled with Nightmare Energy, meant that few opposed them as they marched through the universe. The Vida'Rra stood before them and succeeded in defeating Shu'rimrodir, causing him and Diafthora to be separated and the demon lord to be trapped inside the alternate dimension known as the Realm of Dreams, with his prison becoming known as the Nightmare Region.

While Shu'rimrodir spent the following eons in a state akin to a coma, a tiny speck of his being breached into the Onuris Universe in the years before the Second War of Black Fog; his minion Shu'wokerama invoked it into the body of the Ermitant scientist Errr, who would serve as a host body for the God of Nightmares to eventually return at full strength. This tiny piece of Shu'rimrodir would be known as the Avatar of the Devourer, serving as Errr's personal guardian for the following years.

As the Second War of Black Fog unraveled, every soul killed by the revived Corruptus and their new Marinoxidiz minions served to empower Shu'rimrodir, with the ultimate goal of freeing him from the Nightmare Region. The Dracogonarious Empire would foil their plans, however, by destroying the Corruptus Overworlds which served as the demonic batteries behind the ritual. The death of Errr, however, caused an extraplanar rift to send the heroes of the war into the Nightmare Region, where Shu'rimrodir himself attacked them in a last ditch effort to free himself. By using the Dreamy Essence heart of Laminoula'Fuerq as a foci, the heroes of the war detonated it inside Shu'rimrodir's own heart, causing the demon lord to be annihilated from within.

Shu'rimrodir manifested again in the decades following the Second War of Black Fog. The exact methods of which he resurfaced are unknown, but it is widely assumed that he was recreated by one of the Xhodocto, as he found himself under their service ever since. At this point, he found himself able to travel into other planes (such as the realms of the Samut'angar and other servants of the Xhodocto), but remains unable to freely breach into the mortal plane.

In the current day, Shu'rimrodir slumbers at the depths of the Nightmare Region, 'dreaming' the Corruptus' forces into existence and simultaneously watching the universe through the eyes of every single Corruptus Demon in reality.

While he belongs to the Shu'olerthae species, Shu'rimrodir appears nothing like the rest of his kin. His appearance is that of a massive draconid demon with black purple scales. He possesses four eyes, with a fifth eye socket on his forehead serving as Diafthora's "residence", a pair of horns, two large ear-like structures and a massive red crystal at the top of his head. He possesses two arms and two legs, each displaying natural armor and his arms having large spikes coming out of it. He has a long, bony tail and on his chest, a large pulsating nightmare heart is visible. Shu'rimrodir always has masses of tentacles erupting from his back.

Shu'rimrodir is a demonic entity who shows a complete lack of empathy for those who are not in some way connected to him. He seeks to dominate the universe by converting it into his servants and shows no mercy for those who oppose him. His complete disregard for mortals is contrasted by his deep caring for his own servants, and Shu'rimrodir displays equal care for every one of his demons and servants, from the most to the least powerful. However, he is known to absolutely loathe failures and is willing to abandon or destroy servants who fail him. Despite serving the Xhodocto directly, Shu'rimrodir is not concerned with their unfathomable thoughts and goals, being content to torment the universe on his own accord for as long as they allow him to exist.

Being the Supreme Entity of Nightmares, Shu'rimrodir is among the most powerful Essentials of all. He not only has full control over Nightmare Energy, he also controls its flow across reality at will, meaning all Nightmare Energy is an extension of his will. Due to this, most of his demons are locked in a hive-minded state where they directly follow Shu'rimrodir's orders, unless he gives them free will. Shu'rimrodir can create new life out of Nightmare Energy and procreate to create more Shu'olerthae. He displays usual nightmare-demon traits such as the power to spawn tentacles out of his body, superior physical strength and endurance, and soul-devouring.

“An eternity of suffering awaits you under our grasp.”

“Drink the universe dry; shall this universe quench their parched minds with the system renewed.”

“A dangerous demonic creature, with incredible powers and knowledge of the way the Universe works. With a cunning and evil character his actions even reached my ears, and he should be watched over, especially since he allied various powerful entities like the Xhodocto. Even though he doesn't know it, he is being watched by my servants and if he will ever harm those I look out for, and breaks the rules of the Gods he will be dealt with.”

- Ultimate One of the Rambo Nation Religion

“Like all the demonic entities, he is definitely worthy of respect. He's not the first guy I'd like to do battle with... but if we do ever meet, that shall be a battle to remember.”

- Captain Lorrelas of the TIAF

“Hail the might of the only true god there is, the Devourer of Dreams!”

“Our priests have spent many an hour studying the holy scripts for a mention on this race, and still, we do not know whether to praise him or shun him.” 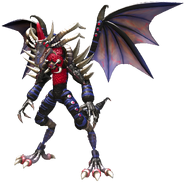 Shu'rimrodir as he appeared before the Annihilation

The Avatar of the Devourer 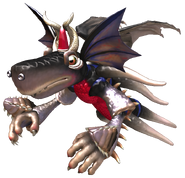