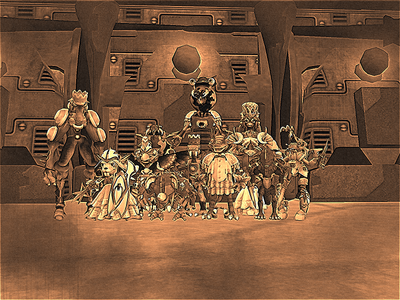 Legion of the Deathmarch

The Onuris Military or commonly referred as The Allies, are the Seven Starr Alliance' main military. They are the same legendary alliance that fought the Xhodocto, and won.

During the Annihilation, the old Onuris was, sadly, destroyed. However, it was revived, in the form of the SSA Onuris Military. The veterans of the Onuris Alliance who ha survived were in the Seven Starr Alliance. The alliance formed the Onuris Alliance out of the remnants, who became the spiritual successor.

The Onuris characteristics are variable, but the one most important is the strong union all this races have between one another.

“These united races of the SSA are so diverse there is really no way of truly sorting them into groups.”

Hugely variable. Most members of the Alliance are muscular and strong from battles with the demons, while others are less strong but more intelligent. For example, the Loron are extremely tough from combat as well as hugely strong. Others, like the Civatron, are strong from hugely powerful energies.

It is difficult to define the physiology, due to the fact of thousands of species rallying on the Onuris Banner.

An overall evaluation of the physiology was performed by the Taldar. They confirmed that, while species under the Onuris Banner were so many in number, there was a way to categorize physiology in the alliance by classes; 1, 2 & 3. Class 3 Physiology were species who contributed more through intelligence and science, trading or diplomacy than as soldiers. They have a weaker physique than most members. In the military, they mostly work in vehicles and starships but it's very rare that a Class 3 species will have individuals on the physiology level of Class 1. Examples: Radeons, several URC members, several Rambo Nation members, and others.

Class 2 are more well-rounded species. Their physiology isn't as high as those in class 1, but they are still fairly strong beings, stronger than most humans. Their jobs are ranged, from trading, intellect & diplomacy to soldiers. As soldiers, they mostly use ranged weapons, are back of the line or work in vehicles. It's not uncommon for individuals to become as strong as, Class 1, however. Examples : Jarzo & several DCP members, TAE Asgord, Lequians & other DSB members, Libertus, Rambo Serindia, and Shka'Tun.

Class 1 are the toughest of the toughest species. In general, they are the strongest beings of the universe. While several individuals of these will species take more diplomatic, scientific or economic jobs, in general they are the greatest soldiers, who have a chance of surviving against the touhest foes. Examples:Loron

Class 0 are the beings who don't fit. These are the Ravenrii and Taldar, and other Tier 0/High Tier 1 members of the Onuris Alliance. The most notable examples are the Civatron, and The Krassio.

The Alliance are very potent at using energies, in particular Psionic Energy, due to the Krassio teaching the alliance usage of this energy. Creatures such as the Libertus are very adapt at using Psionic. Other members, such as the Taldar, use their own energies like Chronoscopic.

Besides energy usage, the majority of the alliance have very potent technology, developed from warring the demons. But all the alliance have their own unique abilities that serve well their purpose of fighting evil.

The Onuris Alliance are, on majority, a warrior society. There are several territories the Alliance shares, normally during dark times in wars against the Xhodocto. These societies are close and packed together, where the Onuris must share what they have to survive.

Besides from this, it is variable; some Alliance empires have war like societies, others are peaceful.

“You don't need powers to be a hero”

- Warlord Kilnok of the Delpha Coalition of Planets

The Onuris Alliance have the strongest military in the universe, and one of the strongest in the multiverse. As the Onuris is full of incredibly strong empires, some have battled each other before, their military is full of nearly invincible soldiers, and very potent technologies.

Perhaps, there are supernatural beings, such as the Krassio in the Onuris side, but not always soldiers and warriors from the Onuris carry powerful energies, some just have the will to fight. Beings that even if they do not possess any kind of power, sense the oppression from the DeathMarch, and feel the need to join the cause. These soldiers coming from species under Tier levels are willing to stand alongside their powerful companions in all their missions, for this, the Onuris leaders have empowered the military with high technology, armor and weapons in order to fight the powerful Xhodocto.

Though the numbers of powerful races are significant in the fight, the other species conforming the Onuris military are the greatest population in the armies of the Alliance. The military is composed by millions, if not billions of warriors choosing to give their lives for the Universe's daily facing of doom. These soldiers/troopers/warriors are given great admiration and respect across the Universe, many infants wish to be like them... sort of (given the fact that their survivability chances are not the best).

All the Onuris Battalions are outfitted with the same color, in order to distinguish them when in battle and easily recognize the non-members in order to protect them. Here are some of the outfits. If you are part of the Alliance and you want your species to have a Onuris creature outfit, paint it and add it here;

Note that the Onuris Military colors are Black, light blue and brown.

Many members, such as the United Republic of Cyrannus, the Federation of the Core Worlds and the Delpha Coalition of Planets, have extremely advanced starships. Due to technology sharing, the Onuris Alliance Navy has extremely powerful warships, which have probably proved to be one of the main things that stopped the Xhodocto, in their genocidal campaigns.

The Onuris fleet is quite a variation of all types of battlecruisers designed by the most powerful species, these carry strong shielding and powerful weapons to stand the demonic energies of the Xhodocto. Space battles are the most common fray in the War of Ages, massive fleets engaged across the cosmos without pity and mercy, destroying each other for centuries. There are major space structures designed to station these fleets, and these were potent nominees for targets during the great War.

The Onuris Alliance use very potent devices, sometimes revolving around energies such as Psionic energy. Onuris' devices are mostly used for faster healing, protection against Demonic energies and other means of survivability; the Xhodocto are incredibly powerful and nearly impossible to defeat.

The Onuris fleet and military both utilize incredibly powerful armour, a lot of which is alloyed with essences, to make them harder, stronger and better defence against Chaos Energy. The ships also carry incredibly strong shielding, designed by Onuris' most clever and advanced scientists, with additional support from the Omnipotent Four.

The weapons weilded by the Onuris Alliance are highly specialized for fighting the Xhodocto and other demonic beings. Since many Tier 1 and 2 civilizations are members, many advanced weapons have been merged.

Before the Xhodocto Revelation, Onuris had several weapons that could destroy a Xhodocto's physical but not ethereal body:

The following statements must be followed in detail for all members, we are united to fight an evil seeking to destroy our Universe, and all the multiverse. As a force of good, we must abide to the restrictions others may want to put into us. Onuris members must also follow SSA laws.

The military laws were given by both the Host and the DCP.

The diplomatic laws were given by both the URC and RN.

The essence laws were given by the Taldar, and agreed upon by the Omnipotent Four.

Retrieved from "https://spore.fandom.com/wiki/Fiction:Seven_Starr_Alliance/Onuris_Alliance?oldid=701131"
Community content is available under CC-BY-SA unless otherwise noted.