Prologue - The Need for the Lead Edit

In the shattered space, a wasteland of scorched rubble amidst black holes and rifts, an army stood within a great arena dug into the surface of an asteroid. Lights flittered above, ships and shuttles darting encircling the asteroid. These were the Heralds of Mosivam, hiding away in the damaged bruise of the galaxy since the Dominatus war where even the DCP doesn't tread.

In the centre of the arena, an unlikely survivor of the Overseers, Mosivam spoke.

"My people, our time has come to stop hiding like worms cowering in the dirt. If we do not act soon, we will be destroyed by other Overseers or the DCP, or worse we shall wither and die as old men with no lasting legacy."
Mosivam's second in command, Tharkun Alhkla interjected.
"The Sons of Hedon grow large in Andromeda and are being employed to wipe other Overseers out. They have access to donor genetic material. This means the numbers of this Caltraxa Guard grow. They will stop at nothing to destroy us, meanwhile we are growing old."
Mosivam carried on; "This is the second time we have nearly come to utter destruction. As you know, you are all creations derived from myself. But I belong to a people as well, your ancestors. We were a powerful division of Grimbolsaurians, billions strong under the command of a Warlord known as Mauloron. A brilliant commander and scientist, he tried to perfect the Grimbolsaurian species, and was the foremost expert in genetics. His creations however, scared the DCP's Undying Council and so he joined the Revolutionary war. He was not however, an expert in hand to hand fighting, and was murdered in cold blood by his father. Our people were persecuted and exterminated by the DCP in revenge, and so we hid like do now until the Dominatus found me. Once again, we have the opportunity to survive, and not just that, to frighten the DCP once more!"

The Overseer army roared with applause through their comlinks.

Mosivam and Tharkun Alhkla explained that the Heralds were to use the various rifts and wormholes to travel back in time and rescue Mauloron from death. It would not change their timeline, but it would be good enough.

The end of the Revolution Edit

The most ferocious battle to ever occur in DCP space was now being fought over the homeworld, Mirenton which had unthinkably fallen to the Warlords. Emperor Wormulus, Kilnok and his last faithful sons gathered all they had left to liberate it, from out of hiding in the shadows. The Emperor watched solemnly as his is navy began to fall. All of a sudden, one of his sons Titanozor, on the side of Eclipsos double-crossed him, causing confusion within the rogue Warlord ranks. In a last ditch attempt, Eclipsos and Mauloron arrived via transport beam aboard the Emperor's palace ship...

The Emperor easily outclassed his son in a duel of swords, who was fighting only on the defensive. Mauloron fell quickly after the Emperor ruptured all his tendons in an almost supernaturally quick blur of attacks. The Emperor quickly knelt before his dying son, and asked him "why?". With the Emperor almost in tears, Kilnok ushered him on; "Eclipsos is in the singularity-engine room, he could destroy our ship and us with it", leaving only his guards in the room to take Mauloron away.

As the guards stood cautiously over Mauloron's body one of them spat, "careful!" said another, "the Emperor will still want his son's body to be treated respectfully.". There was a loud bang in the room, but the guards were un-phased as they were in the midst of a huge space battle. This act of being spat on actually woke Mauloron who was not yet dead. "Crap, we have have to finish him off though!" One of the guards held a gun to Mauloron's head, who looked on in shock.

All of a sudden, the guard was skewered into the ground by a massive electrostaff. The guards turned to find themselves in the presence of beings at least three times as tall as them, but vaguely Grimbolsaurian. The beings threw more staffs with unnatural strength, killing the rest of the guards in an instant. The Heralds had arrived, and took Mauloron without even surveying this pinnacle moment in DCP history.

Mauloron, in and out of consciousness, was taken on a floating stretcher through a bright corridor and into what looked like an asteroid. He didn't know where he was, had he been shot? But he knew it was significant as the beings peered over him.
"His body is augmented though it is outdated. He must be rebuilt..."
There was no pain relief as his organs, brain and circulatory system was scooped and lifted out of his body.
The last thing he heard, "We must be careful not to kill him, this was a swift operation, any earlier foray into history may not." said one, then another, "The pain will not kill him. He has essence like all of Wormulus's line."
His bones and senses were completely replaced; his brain was placed in a new skull; his muscles were dipped in a black liquid and started to grow into a new form. His vision and and hearing was turned on.
"Your new name shall be known as 'Yutgap Fendo'." Yutgap looked out the window of his operation theatre, and saw madness in the sky. 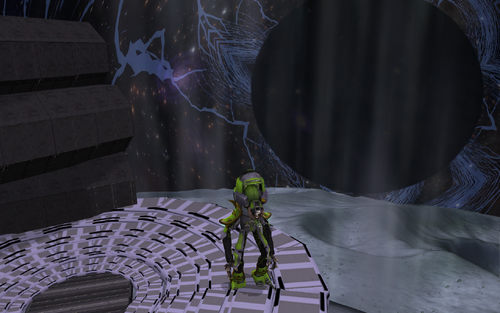 Retrieved from "https://spore.fandom.com/wiki/Fiction:Sector_Ossuarium/Return_of_Mauloron?oldid=689122"
Community content is available under CC-BY-SA unless otherwise noted.