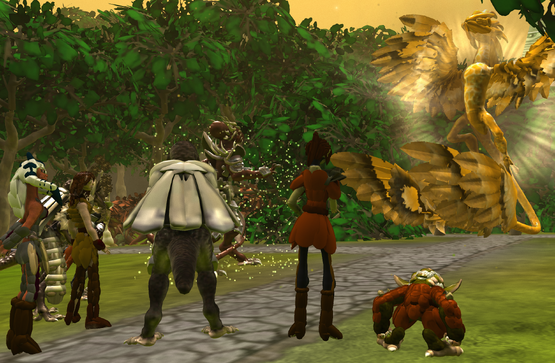 The sun was setting on the Aldárae Temple, the sound of songbirds and the trickling of distant waterfalls filling the twilight sky. In her quarters in the Temple, Aoirtae sat on her bed, absentmindedly gazing at the holographic display on the roof, depicting the heavens above Andustar, the planet where she spent much of her early life. Despite being glad she had the opportunity to travel the stars, in quiet moments—now all too rare with the outbreak of the war—she found safety and comfort in the projection of Andustar's crisp night sky.

The sound of the door buzzing snapped her out of her day dream.

The young Ortella jumped from the bed, stretched, and walked over the door, which slid open to reveal Kara Inviá, who sauntered past Aoirtae and planted herself on the sofa.

Aoirtae shrugged, and beckoned Kara to follow her out.

Kara jumped to her feet, and began to follow her friend.

As the two made their way through the temple's corridors, they finally arrived at the entrance to the Chambers of the Ethelnór Aldárae, the guilding council of the Order. Upon gaining entrance to the chambers, they were greeted by Master Ryen himself, who embraced his former pupils warmly.

As Aoirtae looked around the room, she saw that many of the most revered members of the Order had assembled, including Masters Alinor Nanuq, Aenaró and Daera Rosalayne, as well as others such as Arasah-Nui and Northarr.

At this moment, through the windows of the temple, the light coming from the clear skies of Aldár appeared to grow more intense - far more than usual. The skies were illuminated and almost turned golden as a being, shining almost as much as a star, slowly emerged down into the atmosphere. Throughout the temple, the Aldárae made their way to the central courtyard, to greet the new arrival.

As the figure approached the ground, the light emitted from it slowly dimmed to reveal what it truly was; it resembled a massive bird with feathers made of flame, with three pairs of eyes as white as pearls. It did not beat its wings as it slowly descended to the ground, instead keeping them open, revealing to the Order its great span. As its clawed feet touched the ground, it spoke;

To Aoirtae's surprise, Apolithanatár did not immediately appear in his Oikoumene form, but as as a group of firefly-like lights.

Kara's eyes widened, and despite her best efforts, she failed to suppress the humour in her voice.

Chaneonix clapped his wings together, and using his power over the Light, he created what appeared to be a star map of the Unknown Regions in front of himself, using one feathred finger to point at one specific region of space.

Ryen smiled, and indicated to Aoirtae and Kara.

Aoirtae placed her hand on her head.

Chapter II: Relics of the Ancients

Having picked up Gorf at Capricaerón, much to his dismay as he was asleep at the time, the crew of the Auethnen Raptor made their way to their destination, far into the Unknown Regions. It was a quiet trek, devoid of any obstacles, though Gorf would prove himself a less than pleasant passenger as he went out of his way to 'play' with them, leading him to be kicked a few times by Vanikaimar.

Once they arrived to the planet which supposedly held the Spear of Ramielum, they found it was, indeed, abandoned; former Imperial encampments were present in the lush jungle which hid the entrance of the facility, though they were devoid of life and all of its valuable resources had long been taken away, as the Empire found no use to the place. Once they landed and made their way through the camps, Vanikaimar kept his rifle primed in the event of an ambush while Gorf non-chalantly walked ahead of them.

With a pout, Gorf guided them inside the facility which, as Chaneonix had said, appeared to have no power; electronics surrounded them, though they were all turned off. In order to guide them through the darkness, Gorf's eyes begun shining brightly as if they were a pair of lanterns - causing Vanikaimar to become increasingly disturbed -, which aided them in going down the facility and avoid any debris on the path.

The group eventually arrived to a larger chamber, where a large podium stood. Mumbling under his breath, Gorf shoved his own hands inside his mouth and then took out an object; a large shard of solidified Dream Essence, the same he had taken from this place years ago. He placed it on the podium, where it immediately begun to float as the lights around them turned on instantly. Gorf himself begun to rapidly shrink in size as he reverted to a more simple form, the one he had when Kara was still a child. Kara rushed forward to him, concerned that the experience was painful for the entity, though he appeared to be largely oblivious to what had happened.

Gorf looked at them in confusion, as if not understanding them. It appeared removing the shard had also made him less intelligent. Meanwhile, Vanikaimar looked through the systems of the chamber, attempting to make sense out of them; this technology was beyond that of the Nagith, and he struggled to find the means to open the path to the Spear.

At this point, Gorf walked over to a wall and, curiously, gave it a simple poke. The machinery rumbled as a hidden doorway opened before him, leading deeper into the facility.

Kara and Aoirtae activated their energy weapons, illuminating the walls of the facility as they moved deeper within the installation. The air around them was heavy, as if the corridor had not been used in billions of years, though the facility appeared to be lacking in any defenses; as if its creators had never expected it to need them. They would eventually reach what appeared to be a dead-end, though suddenly, a light passed through them as a robotic voice reminiscent to that of a Vida'Rranlora ringed through the corridor.

After a couple of seconds, the wall before them rose up, revealing the chamber ahead as the lights dimmed out.

The chamber before them was smaller than the hall before, resembling more of a laboratory, though a long abandoned one. In a podium similar to where the facility's power source stood floated what appeared to be a mechanical polearm which radiated an aura of golden light. Gorf was immediately attracted to it, causing him to jump in an attempt to grab it, to no avail.

Both Kara and Aoirtae were surprised that Vanikaimar would put his life in danger, in their place, and watched as he stepped forward. Vanikaimar threw a hand at the Spear and grasped on it, his eyes narrowed. Though, perhaps much to their surprise, nothing happened; there really were no defenses in the facility.

By the time they arrived back to the main chamber, Gorf immediately jumped at the shard of Dream energy and chomped on it, swallowing it whole. Before their eyes, he quickly returned back to the form they were used to, though he appeared very displeased.

Having left Gorf back at Capricaerón, where Gorf would surely tire Apollo's ears telling him of his latest adventure, the crew of the Raptor returned to Aldár in order to present the Spear to Chaneonix. The avian Oikoumene, surrounded by the members of the Order, inspected the artifact outside of their temple as it floated before them; Chaneonix appeared particularly enthusiastic.

Ryen suddenly reacted to an unseen force descending from the heavens.

Throwing out his wings, Chaneonix unleashed a wave of light around him which covered the Order, and beneath Kara's feet, her shadow's shape shimmered as it took the form of a Basileus. Kara was the first to react, moving away from the shadow and activated her blade. The other assembled Aldárae activated in unison, activating their blades and forming a defensive circle around the younger and less experienced members of the Order. From the ground, Mar-Júun manifested from Kara's shadow, leaping into the air and grasping on the Spear.

With widened eyes, Chaneonix attempted to launch his energies at Mar-Júun, though befor ehe could strike him down, the Basileus teleported away in a black mist, taking the Spear of Ramielum with him.

Chaneonix proceeded to take flight and depart from the area entirely, clearly distressed. While recovering the Spear from its original location was easy, it seemed they were being watched all along; and Mar-Júun was not one to let his enemies take the upper hand so easily.

The skies of Vasuband grew dark and ships begun pouring out of hyperspace and opening fire at its planetary defenses; Imperial ships warped by terrible forces, as well as ships associated with the Cognatus. Soon enough, armies begun marching across the planet itself: Heleanorians, Rambo Serindia and undead Cogsangui, fallen to the Nightmare, opened fire at the Imperial forces of the planet. The mothership leading the invasion was known as the Dark Dream, named after the ship Mar-Júun used during his brief time working alongside the Imperial Navy, and at its helm was Warmaster Xae Vandon, who awaited his master's return.

He was eventually met to the sight of Mar-Júun teleporting into the ship, holding into the Spear of Ramielum, though he would quickly throw it into the ground in a hurry - merely touching the Spear burned through his very soul, causing him to snarl in pain and disgust.

Atop the Crimson Tower in Basilban, Grand Mandator Erissare stood with her hands on her hips, gazing out the window at the ships descending from the skies.

One of her aides, Cenrond, jumped in place and rushed forward.

At the base of the Crimson Tower, Mar-Júun and Xae Vandon joined their demonic forces as they fought the defenders. The Warmaster's savagery was unmatched in combat, cutting through sways of troopers with little effort while Mar-Júun used his powers to invade and corrupt the minds of any Basileus who got in the way, turning them into his servants. Members of any other race caught in the cross-fire, however, were ordered to be slaughtered without mercy; lesser races were not welcome in his army.

In her office, Erissare frowned.

It was too late to escape, however, as Mar-Júun's minions begun pouring into the Tower itself, and soon enough, the Vanguard himself and his Warmaster entered Erissare's office. The sight of her caused Mar-Júun to snarl in disgust. Erissare reacted in kind, running her eyes up and down Mar-Júun's armour.

From the shadows beneath Erissare and her aide, tendrils of nightmarish energy thrust upwards, wrapping around their limbs and leaving them immobilized.

Clenching his teeth in anger, Mar-Júun threw his hands at Erissare's head, his hooked clws digging into her scales and his touch feeling hot as fire.

Mar-Júun dismissively let go of Erissare, though she would remain trapped in the tendrils for a while longer as he and Xae Vandon left the office to seek a balcony, where he could speak to his minions; victorious, the Vanguard's army of monsters cheered for their leader as he spoke.

Retrieved from "https://spore.fandom.com/wiki/Fiction:Second_Great_Cyrannus_War/The_New_Shadow:_Part_III_-_The_Spear_of_Ramielum?oldid=771333"
Community content is available under CC-BY-SA unless otherwise noted.