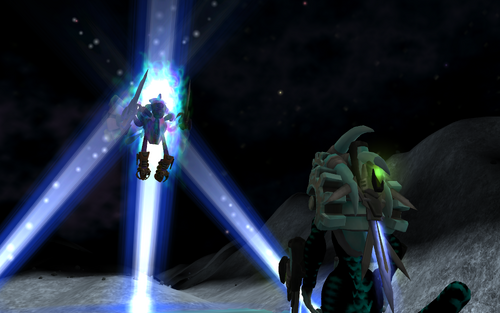 The Cyrannus Galaxy is burning with the fires of war, as the Galactic Empire of Cyrannus faces opposing powers from the gigaquadrant in order to continue existing as a force of order and law.

As the Empire consolidates its gains, it also seeks conquest. Imperial troops advance into the colonies established by the intergalactic superpower known as the Delpha Coalition of Planets in Cyrannus, all in an effort to finally take hold of the entire galaxy. The DCP forces stationed in Cyrannus begin to fight a losing battle, one that can only be salvaged by heroic deeds in the name of the DCP.

However, as the DCP looks desperately for a way to contain the Empire, watchful eyes pry into the conflict from Chandras Galaxy, one of the two Quadrant Galaxies believed to be unexplored and uninhabited by any major threats or possible allies. Little do they know that the mighty Civatrons, warriors from a time before the Annihilation, have established their civilization anew and that their leaders, especially Ynur'Vae, Lady Protectress of the Civatron-made Singularim Pact, supreme commander of its growing military forces, and a powerful Psionic Goddess of Death.

As Ynur'Vae studies the great war that afflicts the Cyrandia Cluster, she comes to the realization that the DCP could not handle this without help. The Singularim Pact has still to reveal itself to the Gigaquadrant fully, and the Empire's existence means a threat to their view of chaotic harmony. Ynur'Vae sees that the DCP gets exactly what they need. They do not need armies, they do not need an old ally appearing just yet, what they needed was a symbol of hope and victory, one that could soar through the skies like a battling angel and inspire millions to fight for their cause.

They needed... a Warlord.

It was a vast, seemingly unending country. White shores delimited the shape of lakes and beyond lied an endless sea of glowing vapor emanating from it as if the sea tried to rise into the black sky, only to fruitlessly dissipate into darkness.

Ynur'Vae, the Civatron Goddess of Death, named Ynuri by her followers, which meant "Gracious one" in their language, stood gracefully on top of a small hill, observing the horizon as if she could easily determine invisible borders for it. Such was the personification of death itself, looking at the limitations of one's soul.

"Such simple beauty..." she said to herself, "To think my birth gave way for such a place to be restored. Singul'Aren was not exaggerating when he spoke of peace for one's soul. So this is Iluvii... the place where minds come to rest."

In the past, the so-called Iluvii realm was a place of rest for Civatrons and other psionic members of the ancient Cianju Alliance. It was a place where they could focus their raw mental power and project their minds into such astral plane, where the minds of countless beings formed a harmony beyond mortal description among them.

But then, the Civatrons fell, and with the rise of the Xol'Etra, the Iluvii realm was sealed away, never supposed to be used again. No psionic being, as powerful as it were, could ever hope to beat the complex mental-universal locks that the Psionic Lords had set into the many doorways to the Iluvii. And so for many years it remained utterly abandoned.

Or so they thought.

Psionic users, upon death, possessed the ability to transfer their soul into the astral plane of the Iluvii realm. And so, when millions began to flee to this resting place with the Xol'Etra not realizing about it, something began to coalesce little by little, and that something was no other than Ynuri.

However, Ynuri did not take sentient form until the great massacre of Kaas Galaxy at the hands of the Xol'Etra during the devastating Great Psionic War between the Singularim Empire and the Xol Dominion. Just as the Psionic Lords' forces finished the last survivors of the ancient Krass and other Singularim supporters, Ynuri manifested fully awakened, her power devouring many servants in an instant. Filled with rage, Ynuri sought to hunt down those guilty of such atrocities.

She must've killed scores of enemies back then, and so she was revered a hero by her people, and an equal for Singul'Aren and Grand Maester Master Kroc. She now had her place as one of the Supreme Trinity that ruled the Pact. Now, she lied there, taking joy and embracing peace as the Iluvii's soothing breeze played tones of harmonious melodies.

She walked downhill, still enjoying the soothing ambiance of the Iluvii realm.

Another voice spoke to her from behind, but there was no mental projection of another denizen.

"Are you sure you want to do this, my lady?" the voice said, "What would the Grand Maester and Patriarch think about this course of action?"

"Do not question my motives, spirit. The three of us share a connection you cannot even fathom, I act in their name, just as much as they act in mine."

She arrived at a small pond, and Ynuri did not waste any more time. On one of her hands, she held an orb of light that seemed to process vast amounts of information at an incredible speed, it changed color from time to time.

"Is that...?" the invisible voice asked.

"A preserved psionic mind. The work of a Civatron. Judging by the psionic circuitry and mental locks, this is the work of a master that predated Xol'Etra teachings." Ynuri answered, holding the orb with both hands, "Look at those colors, this is the work of a genius. Preserving the mind is one thing, but managing to keep things as abstract to mortals as emotions, that is another level altogether."

"According to your history, during the Great War of Ages, only three Civatrons could accomplish such a feat. Singul and Kroc, two of such group, already denied being the author of this work of art, which leaves me with the infamous Mayor Lagartoss."

"I don't think so. Lagartoss was a hero among his people, yes, but he was never on par with my beloved Singul or Kroc in terms of raw power. He captured this complex mind within the orb, but could not do anything with it beyond preservation."

"But you can do it, right my lady? You can go beyond such preservation."

"With a mind kept so well as this one? Today we will find out."

The orb started to shine more, floating a few meters away from the goddess.

"Magnificent... is it not?" Ynuri exclaimed.

The voice did not respond, but Ynuri could feel anxiety on its part. The orb changed shape, taking the form of a bipedal creature. Little by little, the outline of a Grimbolsaurian appeared before the psionic goddess of death. It was clad in violet armor, and although it bore an appearance alien to a Reptilian, its insectoid nature clearly reflected a divine nature.

It was all darkness in Bo Ramik's mind.

It had been a long time since he faced Tricarrion in that final battle, during the DCP's civil war. Bo Ramik had at first some sense of accomplishment when he grasped those memories, but then, as he regained control of his thoughts once more, the obvious question arose on his head.

"Welcome back, Warlord Bo Ramik." a voice behind him said cheerfully.

Bo Ramik turned to face a female black Civatron whose aura displayed a two-fold expression of Death. On one side, the Warlord felt that this being could end his existence for good, given that he felt too weak to resist. On the other side, however, there was such an incomprehensible peace, so intense that Bo Ramik also felt that if he were to die right there, it would be ok.

He did not remember much of what happened after his duel with Tricarrion, everything was vague, and given that the DCP had a long-standing alliance with the Civatrons during the War of Ages, he decided to trust his host.

"I am Ynur'Vae, my followers call me Ynuri. I am the supreme commander of the forces of the Singularim Pact."

"My domain, what the Civatrons from your time knew as 'The Iluvii Realm'."

"So this is... the Iluvii Realm? I always heard it was... blue." Bo Ramik commented, looking around.

"A lot of things happened, now only the dead inhabit it, like you, for instance."

"During your civil war against the rebel warlords, you fell while fighting your brother, Tricarrion."

"Before he could finish you, one of my kind managed to salvage your mind and place you here."