Liberation of the Twelve Worlds

Restoration of the New Republic
Destruction of Capricaepolis

“I suppose you expect me to surrender. You'll be disappointed.”

The Liberation of the Twelve Worlds was a pivotal battle during the Second Great Cyrannus War, during which the New Republic Remnant and their allies, launched a successful invasion of the Calithilaen system, overthrowing the Occupied Republic regime under the puppet President Zare'Anne and resulting in the restoration of the New Cyrannian Republic under the leadership of President Apollo and the provisional Senate.

With Imperial forces spread thin in the wake of the Battle of Harborage and the unexpected intervention of the Singularim Pact on the side of the rebels, a vast allied armada commanded by Admiral Helo Roslia dropped out of hyperspace in the Heran Delta system, and made quick work of a token Imperial strike force defending Cancerti. As the fleet advanced to besige the other Four Systems, the Cancerti First Minister Lexan Korr took up arms against the Imperial occupation force there, quickly resulting in the planet's liberation. Simultaneously, a second strike force of Singularim Pact and Indoctrinate Collective vessels aided in the liberation of the resource-rich system of Heran Beta, capturing both Virgon and Leonae by the close of Neochios 13, 20 NE.

Over the course of the next day, Taurophon and Scorpiae were in open rebellion against naval elements loyal to President Zare'Anne, while Capricaerón and Piconé became the site of intense battle between the rebels, aided by the local citizens, and the Imperials. In orbit, Imperial Admiral Vastæ Scaeva in command of the mighty dreadnought Nemesis, held position over the capital city, though with Republic indictators in place, it was unable to receive reinforcements from outside the system, and was slowly pushed back, allowing the Aldárae sentinels Aoirtae Valaeris and Kara Inviá, as well as Vanikaimar and the Rambo Loyalists to land in the capital of Capricaepolis.

There, they were faced with an elite squad of Imperials led by the Inquisitors Vandalion and Charcar'maer, who engaged the Aldárae in a vicious duel. However, the superior skill of the warriors of light resulted in the defeat of the Inquisitors, dealing a considerable blow to their shadowy organisation. With little subsequent resistance, Aoirtae and Kara made their way to the Presidential Pyramid, where they confronted President Zare'Anne. Though they intended on arresting him, the wily Draken instead attempted to kill Inviá, though his blaster bolt was deflected into his chest by way of the Light.

Simultaneously to the raid on the Presidential Pyramid, the Occupied Republic military leader Rel Vendri betrayed the Empire and took up arms against Admiral Scaeva's remaining forces. Outnumbered by the combined force of both Vendri and Roslia's armadas, the Nemesis was overwhelmed and buckled under the turbolaser bombardment, dealing a considerable blow to the Imperial Navy.

President Apollo landed at the Presidential Pyramid soon afterwards, where he proclaimed the end of the battle and the restoration of the New Republic. For the next two weeks, the President worked to ensure the stability of the Republic's presence on the Twelve Worlds, while simultaneously preparing for a daring strike on Orbispira, boldly hoping to end the war once and for all. However, on the eve before the battle was due to be launched, the Imperial Admiral Irenwen bypassed Republic defences and utilised the firepower of her flagship, the Absolution, to bombard Capricaepolis from orbit.

The cultural capital of Cyrannus was annihilated, though Apollo and many of the city's citizenry managed to escape. In short order, Republic Admiral Gialu Kaedar intercepted Irenwen and destroyed her flagship, avenging the destruction of Capricaepolis and bringing the Liberation of the Twelve Worlds to a bittersweet conclusion. 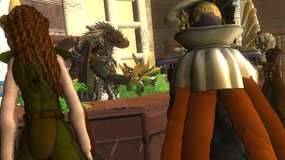 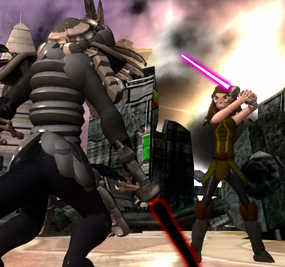 Retrieved from "https://spore.fandom.com/wiki/Fiction:Second_Great_Cyrannus_War/Rebellion/Liberation_of_the_Twelve_Worlds?oldid=862403"
Community content is available under CC-BY-SA unless otherwise noted.