Last Stand of the Viper

“Whatever you hoped to achieve here, in your ruin, you knew, deep down, that you would not succeed. And yet, as I look upon you, I see that for all your intellect, you are but a mote of filth, incapable of serving the plan.”

Praesator Adelheidis had gone so far. She had built the True Republic to fight against Apollo and secured a healthy relationship with Rambert Ramveral, High King of Rambo Nation. By using him, she would dispose of the President and his supporters, and establish herself as the true ruler of the Cyrannian Republic. However, times were changing, and so were the Quadrant Galaxies. High King Rambert was no longer the person Adelheidis had seduced months prior.

Powers beyond her were acting. And she was deemed unworthy. 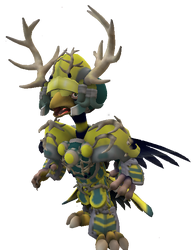 Adelheidis stood on the bridge of her flagship, smiling with satisfaction at the latest reports from the war front. The Rambo had taken the New Republic's Loyalist worlds and fleets by surprise, and though they had been defeated at the Battle of Pauvenris, they were making steady progress in quelling those loyal to Apollo in the Quadrants. In agreement with High King Rambert, Adelheidis' armada would move in behind the Rambo fleets, holding territory and providing defence to regions no longer protected by Rambo fleets.

The True Republic fleet, consisting of all the vessels which remained in service to Adelheidis, held position over the recently conquered world of New Capricaerón, the homeworld of Apollo's Vice President Ramdard Ramthrace. The Rambo fleet had just recently left, commanded by Commodore Malegras, leaving the rubble of the capital city New Delphi behind them. Though Adelheidis had wished to take the planet through political agreement with its leaders, when they instead declared their loyalty to the Loyalists, she watched as Malegras unleashed the power of his flagship on the defenseless settlement.

As she watched the city smoulder below her, she received a transmission from the Rambo Capital. Smiling and fixing her hair, she expected the High King to inform her of a new victory against the Republic, and eagerly activated the holoprojector. What she got, however, was the image of Rambert in a clearly agitated expression; his eyes were dull and tired, as if he had not slept for many days, and they turned into a frown as he pointed his finger at her, immediately beginning to yell;

The enraged High King threw his hands away in an angered gesture.

The High King's face approached the holoprojector, making his face clearer to Adelheidis' view. Even though they were many light years away from her, she could feel something wrong about him.

With that, the transmission came to an end.

When Rambert's hologram flickered out, Adelheidis sighed deeply and slumped into her command chair, running her fingers through her long red hair. The bird had truly gone mad, and now the True Republic was on the brink of ruin. Several possibilities ran through her mind, before she settled on her next course of action. She would travel to the Regellis Star Empire, and seek their support in overthrowing the Republic. To be sure, Empress Minarela would be a natural ally to reclaim her people's prestige after their defeat during the New Cyrandia Wars. Her reverie was suddenly ended by a panicked cry from one of her bridge officers.

One by one, dozens of Imperial capital ships dropped out of lightspeed in orbit over New Capricaerón, completely surrounding Adelheidis' armada.

The ship alongside the Talon of Veloci attempted to jump to lightspeed, but was suddenly pulled back into realspace by a newly arrived Interdictor-class Star Destroyer, which erected a gravity well over the system, preventing any ship from escaping. Adelheidis' eyes widened when she saw that, where once had been the hologram of Rambert, now there was a Libertus in the gleaming white uniform of a Grand Admiral.

Growling, Adelheidis ended the transmission and ordered all vessels to immediately open fire on the Interdictor cruiser. However, Decimius had deployed several Star Destroyers tasked with its defence, and commanded his vessels to target and destroy all True Republic ships. Turbolaser fire raged across the battlefield, with floating debris and plasma littering the once peaceful space above New Capricaerón.

Aboard the Chimaera, Decimius commanded his fleet from his private quarters above the main bridge, his eyes darting from screen to screen. He watched in quiet satisfaction as the Chimaera's cannons hammered the engines of a golden-hulled Venator-class destroyer, sending it spiralling out of control and smashing into a nearby battlecruiser. Another ship, an Aether-class corvette foolishly entered the Chimaera's forward firing arc, and but a second later, all that remained was a cloud of shrapnel and superheaded vapour.

On the Talon of Veloci, positioned near the centre of the True Republic's crumbling fleet, Adelheidis listened in impotent frustration as the sound of screaming and incoherent communication chattered over the comm. She could hear the last of her loyal captains ordering their crews to abandon ship, while others, the more zealous of her followers, announced that they would ram the Imperial ships. Admiral Lincolani, her highest ranking officer, was one such example, and she could hear her bark a kamikaze order, and seconds later, the sound of blood-curdling explosion and utter silence.

When the forward line of True Republic vessels had given way to space debris, Adelheidis could finally get a visual of the battle from the viewport. The Imperial flagship, the dreaded Chimaera was silently moving forward, unleashing devastating turbolaser volleys with enough precision to destroy a Venator-class in the span of a few seconds. Moving alongside the Talon of Veloci, the Chimaera fired a broadside which severely damaged the True Republic flagship, tearing off huge chunks of hull and sending Adelheidis and her bridge officers crashing across the bridge like ragdolls. Removing her head from the cold duristeal bulkhead, Adelheidis looked around to see that most of her officers were dead, and yet to her surprise, the Chimaera had ceased its fire. Before she could contemplate the situation further, her legs gave way, and she fell to the ground unconcious.

The next thing Adelheidis could remember was being holstered to her feet by Imperial troopers, and dragged toward the Grand Admiral, who stood next to what remained of the holoprojector.

The Heart of the Empire Edit

An Imperial shuttle descended through the blue skies and white clouds of Orbispira, the towering monades and skyscrapers passing by the viewport which Adelheidis rested her head against. She was still drowsy from her injuries at the Battle of New Capricaerón, but was still resolved to escape and continue her aspirations toward the establishment of her True Republic as the Cluster's reigning hyperpower. Her heart sank, however, when the shuttle touched down not at the site of the Imperial Courts, but of the vast and resplendent Imperial Palace—the heart of the Empire.

She was led into the cavernous building by Imperial guards, who led her to the throne room, where Emperor Tyrómairon sat expectantly, his talon-like claws clasped together.

The guards bowed their heads and exited the room, leaving Adelheidis alone with the Emperor in the dimly lit room. Before the throne, were massive windows opening out onto the Orbispiran skyline below, with countless ships and speeders buzzing past the city world. When the Emperor said nothing, Adelheidis decided to approach the throne.

The Emperor cut her off.

Adelheidis' eyes widened slightly, and she affected a sultry voice she often used against powerful beings.

The Emperor's expression was inscrutable, his dark eyes boring into hers with an intensity so great that she clutched her head in faint pain, though tried to pass it off as brushing her tousled red hair from her eyes. She continued to approach, holding the Emperor's gaze.

The Emperor's response was immediate, though his tone of voice was one of boredom, as if he had been ignoring her words. Raising from the throne, he outstretched his arm and Adelheidis rose into the air.

Adelheidis struggled in the Dark Lord's invisible grasp. She tried to scream, but only deathly silence escaped her gaping mouth. She found herself incapable of looking away from his gaze, and blood began to pour from her eyes.

The Emperor released his grasp, and Adelheidis fell to the floor, though her eyes remained transfixed on his. Screaming silently, she began to convulse, as if her brain was melting, culminating in two geysers of flame bursting from her sockets. The Praesator, and the embodiment of the True Republic, fell to the floor, dead.

Retrieved from "https://spore.fandom.com/wiki/Fiction:Second_Great_Cyrannus_War/New_Republic_Civil_War/Last_Stand_of_the_Viper?oldid=762299"
Community content is available under CC-BY-SA unless otherwise noted.